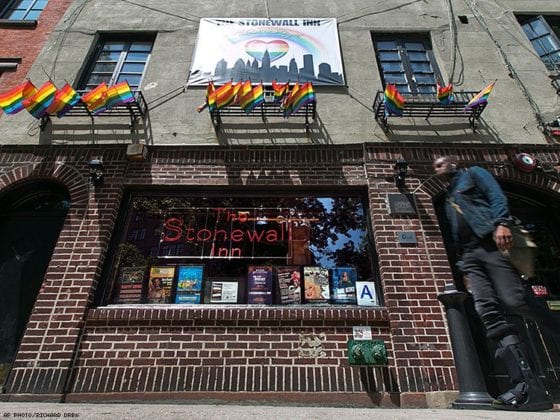 After Mr. Trump’s win in the electoral college, some anti-LGBT folks are feeling emboldened. In a disgusting and pathetic piece written on World AIDS Day, one right wing blogger penned an article that should make your stomach churn.

Paul Hair, a xenophobic racist and major homophobe who likes to dabble in Sci-Fi writing penned a piece for the Barbwire website entitled: Dismantle the Stonewall Inn. As most readers already know, New York's Stonewall Inn is the birthplace of the modern LGBT rights movement.

It also happens to be a national monument.

He actually thinks that a tavern, which has deep historical importance for civil rights, somehow is connected to a sexual act. And by extension, he also appears to think that being LGBTQ is a function of sexual behavior and instead of sexual orientation.

At any rate, he is urging Mr. Trump to reverse Stonewall’s national monument status, offering the following illogical diatribe as justification.

“Demonizing and destroying American culture includes elevating evil. This is why the Obama regime honored sodomy by designating the Stonewall National Monument in June of this year.

Donald Trump should reverse that designation when he becomes president. And while he likely wouldn’t order the subsequent dismantling of the Stonewall Inn, the removal of the national monument designation would open the way for someone else to do so.”

He doesn't stop there. He goes on to talk about Stonewall being a stain on American history and how stripping it of its status would pave the way for its ultimate destruction.

“There already is a movement urging the incoming Trump administration to undo the Obama regime’s massive land grab. That land grab included designating the Stonewall Inn and many other areas of land as parts of national monuments.

There’s no reason those objecting to America honoring sodomy couldn’t join the larger movement to undo all the national monuments Obama designated at large.

And if that effort proves successful, it then would make it possible to destroy the Stonewall Inn and wipe out its stain on American history.”

Mr. Hair also rants about officials in Kentucky who moved a Confederate monument in Louisville to a different location.

Perhaps Mr. Hair might want to learn about the Stonewall Inn and its relationship to American History and civil rights. And he would do well to educate himself about the significance of Stonewall and the early battle against HIV/AIDS.

But then again – there is an old saying about he who protests too much. It might help him to learn about reaction formation.