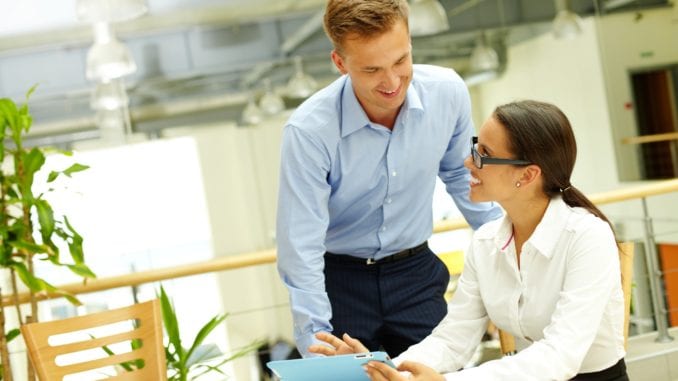 Office politics can be so tricky. Is there a thin line between flirting and harassment? When is it okay to flirt with your co-workers? Can you get away with flirtations at work without risking some serious consequences down the line?

We’ve all been there. We’ve all had that one co-worker who gets a little loose with their hands at lunchtime or pours on a ton of compliments about what you’re wearing. You know they don’t mean anything by it and occasionally those flirtations put a smile on your face.

Or that flirty co-worker might be you. Wink. Wink. There might be that one person at work whose smile makes you regret your current relationship and you tend to ply them with copious amounts of compliments just for practice. You’re married. She’s married. So, this is all just harmless workplace flirtation. Right?

Is Flirting at Work Really So Harmless?

Well, we caught up with relationship strategist and professional coach Steve Harper to get his thoughts about workplace flirting. Harper was quick to point out that “there is a difference between flirting and being friendly at work.”

Harper went on to say that “I think the minute that friendly switches to flirting it puts an unusual strain on the relationship with a coworker. What may start as fun and playful flirting could eventually be construed as harassment at some point.”

Well, a new study published in December suggests that flirting at work can have some strangely beneficial effects. Researchers from Washington State University surveyed hundreds of workers from the Philippines, Canada and the United States. They asked them about flirting. They also made a clear distinction between what they thought was harassment and what was considered non-harassing social sexual behavior.

Related: Here’s Why You Want to Keep a Plant on Your Desk

WSU Assistant Professor Leah Sheppard was the lead author of the study and summarized the findings. “What we found is that when flirtation is enjoyed, it can offer some benefits: it makes people feel good about themselves, which can then protect them from stressors in their lives.”

That seems like quite a bit of a reach considering that for this statement to be true, the flirtation must be enjoyed. In that framework, flirtation can boost a person’s self-confidence which could then protect them from stressors of life. The correlation is precariously thin.

The problem with the study’s findings is that enjoyable workplace flirtations are such a rare occurrence. Also, there are many other ways to boost self-esteem at work. Flirting would seem like a very obtuse way to go about it.

The authors of the recent study on workplace flirting had two basic categories for flirting. There was sexual storytelling which involved jokes and innuendos. Then, there were sexual behaviors which consisted of romantically fueled glances and compliments.

Steve Harper provides further clarity. “Think about the concept of flirting. By design it's leveraged to indicate to someone else you are romantically interested in them. Even if dating isn't the ultimate goal, people respond and react differently when someone shows more than professional interest in them.”

Harper believes that “it can and almost always will result in uncomfortable situations that compromise the work at hand. This is why this kind of behavior is often frowned upon by any HR department worth a damn.”

Then, there’s the elephant in the office – sexual harassment. You might not have meant anything by those sexual jokes, but your intentions don’t matter all that much when considering aspects of sexual harassment. More importantly, how was your joke received? How did it make the person feel who heard it?

It’s all about perception and that’s a difficult area to measure. Sensitivities are at an all time high and companies are forced to adopt more zero-tolerance policies on sexual harassment. For example, Netflix reportedly has a 5 second stare rule. Other companies even have metrics on precisely how you should give your co-workers a hug.

Does flirting happen? Of course,” says Harper. “Do all situations end in someone being fired or filing a harassment claim or lawsuit – of course not. But in today's litigious world, the likelihood that it could happen is not worth the risk. The consequences could be ultimately devastating to your reputation and employability.”

The research study did find that harmless flirting could boost confidence and reduce stress but made a firm line when it came to harassment. Flirting among equals was acceptable social sexual behavior but should never be done with supervisors or managers.

WSU Assistant Professor Leah Sheppard noted that “Managers also should be careful in engaging in flirtation themselves, especially with anyone at a lower level. As soon as there's a power imbalance, you risk entering the domain of what might be perceived as sexual harassment.”

There’s almost no way to avoid it. Flirting at work is just something that’s bound to happen in one form or another. Some people flirt with their co-workers because they view it as safe territory. They’re in a committed relationship and this is the one situation where they can “practice” flirting, so to speak.

Other people flirt at work because they’re away from their partner’s watchful gaze. Some people don’t get to have friends outside of their relationship that they might also consider to be eligible partners. So, flirting at work becomes like a dirty little game. This can get very dangerous though. You might cross the line one day.

You might also inadvertently make someone else feel uncomfortable. It can happen so easily from a misunderstood text message or a lingering glare across the office. Remember, it’s less about what your intentions were and more about how your actions were perceived by the other party.

If you’re in a leadership position, then flirting is never advisable. It will always descend into some form of power struggle whether you like it or not. A touch or a joke today might be fine, but tomorrow it could be too much. So, it’s best to avoid getting to close with your subordinates.

Also, we should take a moment to state the obvious. Sexual harassment of any kind is wrong. If you feel that you or someone you know has been the victim of workplace harassment, then you should contact your human resources department immediately.