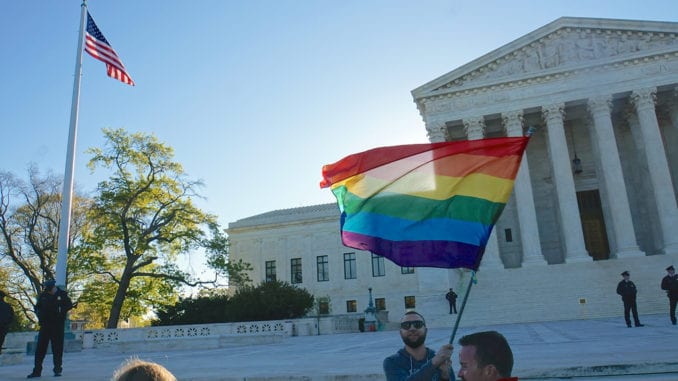 Ex-gay conversion therapy ban to remain in place in California

In a blow to proponents of so called “gay conversion therapy”, the United States Supreme Court has decided to let stand a law in California that bans licensed mental health professionals from working with children to try and alter their sexual orientation from gay or bisexual to straight.

An appeal had been before the court that made the argument that the ban violated religious rights.

As reported in Bloomberg Politics:

The ban was challenged by three people, led by licensed therapist and minister Donald Welch, who said it interferes with their right to practice their religious beliefs.

California officials urged the Supreme Court not to hear the appeal, saying the law doesn’t restrict what religious leaders can say, except in the context of a state-licensed therapy session.

Conversion therapy made illegal in many states

California made illegal conversion therapy in 2012, stating it ineffective and harmful. Other states, like New Jersey, Illinois, Oregon, Vermont, New Mexico and the District of Columbia have passed similar laws, per the Human Rights Campaign, an LGBTQ rights advocacy rights group. The nation’s highest court also turned away an appeal to New Jersey's law back in 2015.

There are a number of approaches used in gay conversion counseling, including hypnotherapy and so called dating-skills training. Other extreme measures have included aversive techniques designed to induce pain and/or electric shock upon looking at same sex imagery.

The lead plaintiff in the case is Rev. Donald Welch, a minister who is also a licensed family therapist.  He provides counseling at the evangelical Christian church, Skyline Wesleyan, in San Diego.

Rev. Welsch, who apparently underwent “conversion therapy” wants to offer it to others and claimed the state law is unconstitutional.

The American Psychological Association has long been on record in opposition to conversion therapy and has stated in numerous public venues that this type of counseling is extremely harmful.