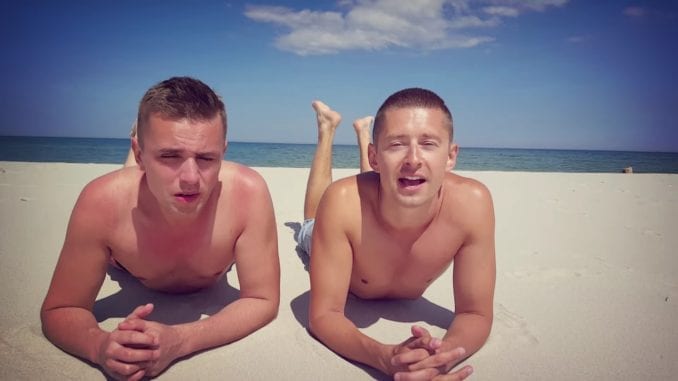 Some threats called for the gas chamber

A gay couple from Poland found themselves on the receiving of vile, nasty death threats after coming out on video.

Jacob Hajduk and David, who have been together for seven years, created a video in July during a trip to the Baltic Sea in Poland. The hope in creating the vid was to put human faces on gay people in very Catholic country and demonstrate LGBTQ folks are “absolutely normal and our love has no difference to their love.”

While the original goal was to show the You Tube video to family and friends, it ended up going out everywhere. Inspired from the Swedish pop rock duo Roxette, the couple's music video has been viewed by over a quarter of a million people.

Even Roxette offered praise in support.

However, once the Polish media started covering their video, the couple began receiving hate messages and death threats. As reported in Gay Star News, people called to “cut their throats” and “pour acid on them”. There were even suggestions that two be sent to the gas chamber.

Apparently, the couple have also been receiving death threats on their Facebook accounts every day. Hadjuk told Gay Star News: ‘One day I came home, I saw David crying. We’ve been together for seven years and I’ve never seen him devastated like that day. His mom reads the comments and she calls us every day checking if anything bad has happened.”

The couple feels the hate is so strong, it goes beyond homophobia but instead, “homo-aggression.”

After strongly considering taking the video down to avoid more backlash, the due have decided to keep it up, stating it would be a step backwards.

“We thought we if took down the video,” said David, “we would have let them win. So we decided to not give up and to spread our story all around.”

“It’s not easy, but this situation shows us it is not just a funny video. It showed how much still needs to be done to let gay people in Poland feel safe and proud of their sexuality and who they are.”

Below is the video – be sure to check it out.