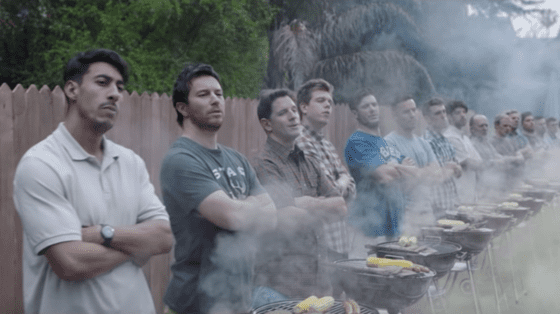 Gillette is challenging men to shave their toxic masculinity in their latest ad.

The #MeToo movement has opened a lot of conversations about the way men treat women. We know it’s up to men to change their behavior, but women have been saying that for generations. We need men to hold other men accountable. Enter Gillette’s powerful new ad that asks them to do exactly that.

The razor company's short film, called Believe, plays on their famous slogan “The best a man can get”, replacing it with “The best men can be”. The video features a flurry of news clips about the women’s rights movement and bullying.

The narrator says men can no longer “hide” from issues like bullying and sexual harassment.

“We can’t hide from it. It has been going on far too long. We can’t laugh it off, making the same old excuses.”

The ad has sparked a controversial response online. Many have praised it for bringing issues of bullying and harassment against women to the forefront:

John Gavegnano: “If you’ve ever made a joke at someone’s expense and pretended it wasn’t bullying. If you’ve ever put someone else down to make yourself feel better. If you’ve ever obtained something trough force and didn’t take no for an answer. You are the problem. The conversation is finally addressing these toxic male behaviours and it is nothing short of rape culture. Showing understanding, compassion and respecting people’s boundaries are not feminine qualities, they are human qualities. It’s about time we start holding men to higher standards of behavior. Evolve.”

THIS is how you use your brand. THIS is how you engage with your audience. Gillette being aware of mostly having a male audience and using their influence as a global brand to make a change for the better. other companies take notes pic.twitter.com/KCdxKDLji0

“Thanks for this Gillette. I agree. We absolutely as men can do a better job instilling better morals and behaviour overall with one another,” another person tweeted.

However, comments on the video are largely negative, with straight male viewers saying they will never buy Gillette products again or that the advert was “feminist propaganda”.

“More like toxic left wing nonsense. Now I have to find a new razor brand…Harry’s here I come,” wrote one angry viewer.

The ad has been watched more than 3 million times on YouTube in 48 hours.