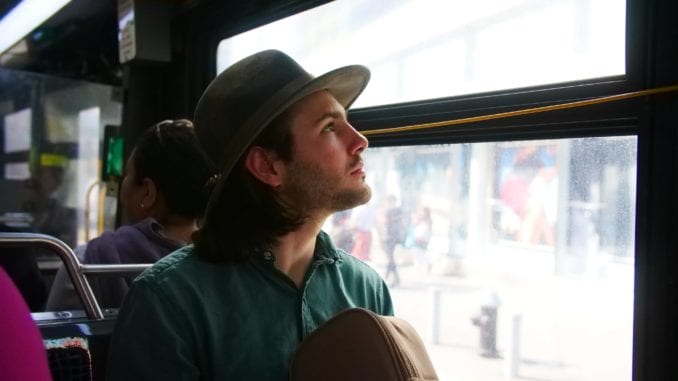 What is manspreading and why do men do it? That’s the question of the hour after a UK design student brought the topic to international discussions.

As we shared yesterday, the student received a celebrated design award for creating an anti-manspreading chair. The chair was created not so much as a functional seat but just as a commentary on the subject of manspreading and gender equality. That said, many people didn’t get the message and proved the student’s point by violently expressing disapproval of the piece of furniture.

But that entire discussion got us thinking, what exactly is manspreading, why’s it such a big issue, and why does it happen?

If you ask someone off the street what manspreading is, you might get a wide range of answers. Is it a natural physical reaction and pose/posture? Is it a sign of the patriarchy? Is it a topic of gender norms and societal pressure? Apparently, it’s all of the above.

The term manspreading is usually focused on when men sit with their legs widely apart. In most cases, this term is used for when men do this in public spaces like on subway trains or park benches.

From there, the topic turns into a larger debate about gender equality (as the design student was trying to allude to). Many women feel that men unconsciously spread their legs as a show of power and marking of territory. To claim the space as their own, as you will. Meanwhile, women, who are trained by societal standards to be less submission, often sit with their legs and arms tucked inward. While these two positions may be natural for men and women, it presents a problem for women.

Why Do Men Manspread?

But why do men manspread? Well, there’s actually been plenty of studies that have looked into the situation.

Plenty of men on the internet and on Reddit will tell you that men manspread because of the way men’s bodies are built. Specifically, they say we have penises and balls that need space. But what do experts think? Well, it’s a mixed bag.

As spinal neurosurgeon John Sutcliffe explained to the Independent, manspreading could be because male and female pelvises are built differently.

“The overall width of the pelvis is relatively greater in females and the angle of the femoral neck is more acute. These factors could play a role in making a position of sitting with the knees close together less comfortable in men,” he said.

That said, Sucliffe believes that the idea of men’s balls being in pain when they sit with their legs closed is not accurate.

“I suspect most men would suggest the reason for adopting the more spread posture in sitting would be the avoidance of testicular compression from the thigh muscles. The pelvic rotation goes some way to improve compression in both aspects,” Sutcliffe explained.

Then a study by UC Berkeley post-graduate researcher Tanya Vacharkulksemsuk states that men may be unconsciously spreading their legs to attract others.

“Based on our results garnered from thousands of single persons at an actual speed dating event, and using a dating application, it is evident that postural expansion can dramatically increase a person’s chances of making a successful initial romantic connection,” she wrote.

But all that said, should men stick to doing the act because it's psychologically or biologically pressed on us? No. If we’re in public spaces and taking up more than a seat’s worth of space, men are being indifferent to the people around us.

While we don’t want to get into the whole debate of gender equality and issues, we can agree that people should be courteous to the others around them. If there are people next to you, check your legs and make sure you’re not claiming space for two. And if no one’s nearby, let your legs free.  Because then, who cares?

At the end of the day, this topic doesn’t need hurt feelings or overly defensive remarks. It’s just a politeness thing and that's an easy fix.