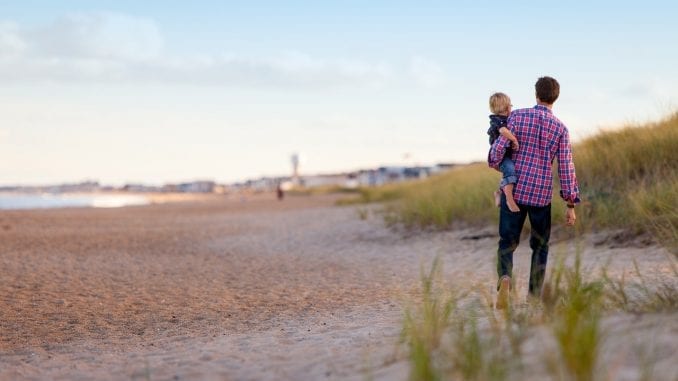 Stay at home dads and masculinity

Do you think its unmanly to be a stay at home dad? Or, is this a new way to redefine masculinity?

We live in a world where societal norms are rapidly changing. Things like racial disparity, social justice and gender roles are concepts that are coming under the microscope now more than ever.

Specifically, the legacy of toxic masculinity is in a state of rapid evolution.

What is toxic masculinity?

The term refers to certain concepts and cultural norms that represent the worst traits of men. Things like misogyny, homophobia, and the need to dominate nature are examples of toxic masculinity.

As society changes so does the role that men play in defining themselves. Traditional ideas about the responsibilities of men in the household have given way to our new way of life, a life in which more men are staying at home to raise their families.

Happy Father's Day to all of the amazing dads out there!⁣⁣ ⁣⁣ Dad's we see you and acknowledge all you do for us and our families! ⁣⁣ ⁣⁣ Tag all the awesome dads to show your appreciation ❤️🏆⁣⁣ ⁣ This post is dedicated to my hubby, he is the glue that holds this whole house together. ⁣⁣ ⁣ ⁣⁣ #happyfathersday

In this way, stay at home dads are redefining masculinity. If you look closely at gender roles in modern society there are fewer and fewer social norms. Gender roles have become more fluid and it’s happening right before our eyes.

According to the U.S. Burau of Labor Statistics, most married men worked fulltime. Stay at home dads represented a small fraction of the family labor unit. In 2019, just 6.8 percent of married families had a stay at home dad.

That doesn’t mean that things aren’t changing. Nowadays, it's not uncommon to see men working professionally in a role that would normally be reserved for women such as a cook, receptionist, fashion model, and in this case, stay at home dad.

Men are also more apt to take up less traditional pastimes such as painting, yoga, and dancing. The most obvious reason for these changes is that society mandates that the modern man become more flexible and adaptive to changes in gender roles.

Stay at home dads are an example of this new style of gender fluidity. A stay at home dad takes up the role that was once traditionally held by a housewife.

He maintains the household through cooking, cleaning, and managing the children. There are several reasons why a man might choose this role, but the main reason is a career-oriented spouse.

Some men might find this prospect to be frightening and even repulsive. However, the concept of a stay at home dad doesn’t have to be negative. It is not a dreary mundane existence. It's one filled with big responsibilities, duties, and unique accomplishments.

Traditionally, the concept of a stay at home parent implied a disparity in the power roles of the relationship. Men earned the money and women controlled the sex.  Those two forces created a balance.

Some would argue that that was never the case. Afterall, cooking and cleaning are basic life skills and can’t be attributed to any specific gender.

Although there are still some hurdles regarding gender equality in the workplace, women can certainly compete with men professionally.

I grew up in one of those traditional households. My father worked and my mother stayed home to take care of the house. My Dad was completely inept at household skills like doing the laundry, cooking and cleaning.

When I got older, I started to wonder if he was actually better at those skills than he was letting on and just delegated those tasks to my mother because she was a woman.

Looking back, I never wanted to be so helpless that I couldn’t operate a washing machine or iron my own clothes.

That’s why I chose to share household duties with my wife. If my father had stayed home more often, then there would have been more peace in my house.

My mother would have certainly smiled more, and my dad would at least know how to iron a shirt without burning a hole in it.

To be fair, my dad was just doing what his dad had done all his life. My dad provided for us because that’s what he believed he needed to do. It was his job in the social construct of our family unit. It made me wonder whether this was an evolutionary trait or something else.

Men Don’t Have to be the Breadwinner of the Family

There’s an extremely powerful role reversal at play here. When men take a step back and the woman becomes the career-oriented spouse, a stay at home dad helps redefine masculinity. He becomes the nurturer in chief for his household.

He might have to give up his career to see his wife achieve her professional aspirations, but he takes on a new role as the domestic leader of the house.

His wife earns more money, and he can focus his attention on the children and the maintenance of the home. He can even freelance or take on side jobs.

Stay at home dads are breaking new ground. This concept would have been absurd just 20 or 30 years ago, but now, more and more people are considering a shift in gender roles. Men don’t have to be the working professionals to have social standing and respect.

Women are just as capable to fill the roles that their fathers filled. Working women can focus their attention on the challenges of misogyny in the workplace when they are confident that their spouse has already won the battle in their homes.

Staying at home with the children creates unique bonding experiences for fathers. Teaching children how to play, read and grow as a person are monumental achievements. Stay at home dads can choose how they want to spend this time with their children.

Their children see them as nurturers and not absentee providers. Stay at home dads teach the value of equal responsibility to their children from an early age. This helps to break the chain of patriarchy for the next generation.

Stay at home dads deserve a special salute. Most of them choose their role and embrace the challenges that come with it. They do it because they love their spouses and they love their children.

We don’t often highlight their efforts in mainstream media but stay at home dads are on the frontline when it comes to redefining masculinity.