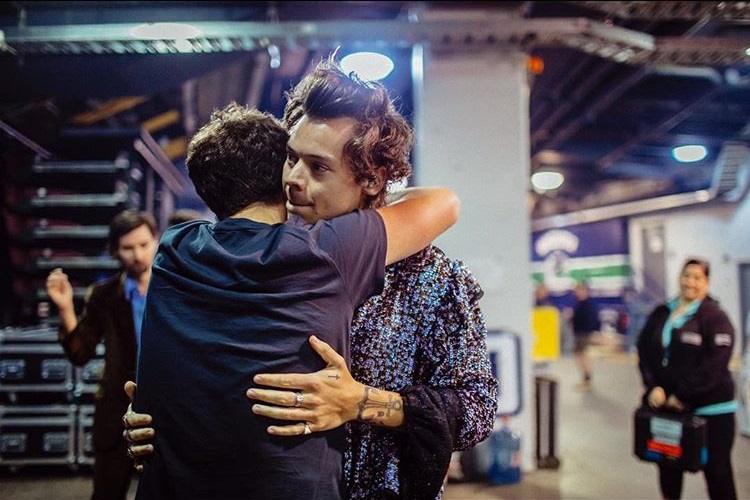 Former One Direction star Harry Styles opened up about his thoughts on male relationships and bromance. While some of us are mourning the reveal that Styles won’t be playing the role of Prince Eric in the upcoming Disney live-action The Little Mermaid, the singer and wannabe actor is busy working on his next projects.

But while taking a slight break from his music tour, Harry Styles sat down with The Rolling Stone to talk about his life, career, and the delicious tuna salad before him. Talking to Rolling Stone writer Rob Sheffield, about several relationships in his life (romantic and platonic). One big conversation held between the two was the importance of friendship.

“I’m discovering how much better it makes me feel to be open with friends,” Styles said.

For most of Style’s young adulthood, he was surrounded by other young men. But, there was still a distance between him and his fellow One Direction bandmates Niall Horan, Louis Tomlinson, Zayn Malik, and Liam Payn. Part of that was the pressures and stress of having work being the major factor in their relationship.

“While I was in the band, I was constantly scared I might sing a wrong note,” he told Sheffield. “I felt so much weight in terms of not getting things wrong.”

But Styles shares that he’s now found a group of male friends that he can be vulnerable with. He now cherishes “feeling that vulnerability, rather than holding everything in.”

“I feel pretty lucky to have a group of friends who are guys who would talk about their emotions and be really open,” Styles shared. “My friend’s dad said to me, ‘You guys are so much better at it than we are. I never had friends I could really talk to. It’s good that you guys have each other because you talk about real shit. We just didn’t.’”

That said, it isn’t like Styles isn’t friends with the others from One Direction anymore. Styles shares that despite the group splitting up in August 2015 (even though, they never officially made a breakup announcement), they all keep in touch. And since his relationship with the other boys is no longer built on work stress, he finds it easier to talk to them now. That entire experience has built newfound respect in him for friendships that can be open and honest about feelings.

“It’s not always the easiest to go in a room and say, ‘I made a mistake and it made me feel like this, and then I cried a bunch,’” he remarked. “But that moment where you really let yourself be in that zone of being vulnerable, you reach this feeling of openness.”

We’re glad to hear that Styles has found a better life for himself after One Direction. And we’re especially happy to hear that he’s found friends to open up to. We hope more men learn from Styles’ experience.