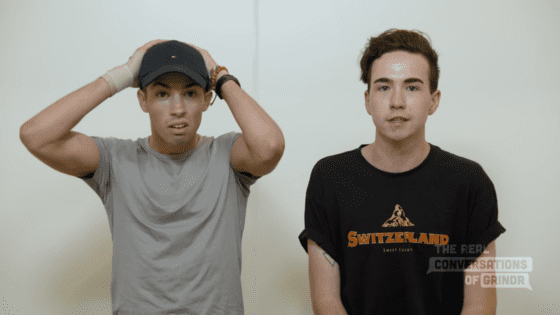 “Start the Conversation. Stop the Stigma”

A new video clip was released as a part of the project Real Conversations on Grindr.

The video shows real and hateful Grindr messages sent to people with HIV. Some messages included, ““You're a disgrace,” and “You should be ashamed, you’re a walking disease.”

The goal was to show the cruelty and ignorance directed towards men living with the disease. Even those who are identified as having undetectable viral loads.

The people behind the project? They are the HIV Foundation Queensland (HIVFQ) and Queensland Positive People (QPP).

The goal of both groups was to shine a light on the hate and ignorance in the LGBTQ community presented towards people living with HIV.

Specifically, the origin of the project was that of a filmed social experiment. The experiment happened at Brisbane Powerhouse’s annual queer arts and culture festival back in February.

“The Real Conversations of Grindr booth experience at this year’s queer arts and culture festival (Melt Festival) exposed members of the public to some of the everyday exchanges that take place online, prompting ongoing discourse around the effects these have on members of the community.

“The result is a powerful and, at times, confronting exposé of HIV-related stigma, highlighting its prevalence in online forums where anonymity is made easy.

“In 2017, approximately 25,000 Australians are living with HIV, around 70 per cent of which are gay men and other men who have sex with men. It’s alarming that so much of the stigma is pedalled from within this very community.”

The response to that event was so encouraging, that this video was quickly conceptualized.

And the two organizations hope that works like these can eventually help to end ignorance and stigma around living with HIV. If that can happen, it can greatly help those both living with it and those with negative statuses.

“While there have been many incredible medical and scientific advances in HIV, what hasn’t diminished is the stigma around HIV and the negative community attitudes towards people living with HIV (PLHIV).

“Unrelenting stigma can cause PLHIV to internalise the community’s detrimental perceptions of HIV, which can result in trauma, isolation and psychological impacts. For HIV stigma to be decreased, it will take a noticeable improvement in community attitudes towards PLHIV.”

You can check out the video down below.

About Devin Jackson Randall 453 Articles
Geek by chance, and an artist by birth. Devin is a journalist and blogger who's always glad to share insights and developments on men's issues. Aside from news stories, he often writes about the roles placed upon men by society, and how both affect the relationships around us. Click on the hyperlinked text to follow him on --> Twitter. Email him at --> [email protected]
Website Twitter