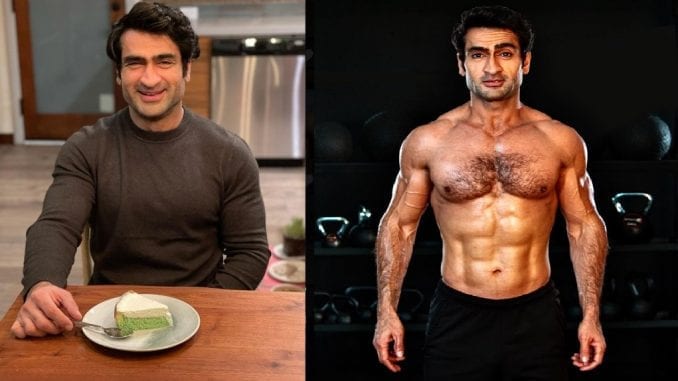 Now guys are getting mocked for being too big and muscular? Really?! And to such a nice guy on top of that? If Kumail Nanjiani isn’t safe, who is?!

In order to celebrate New Year’s Day, Hollywood actor Kumail Nanjiani posted to Instagram. The 42-year-old Pakistani American posted a picture of himself sitting in front of a slice of cake. The actor is seen with a smile on his face and a tight brown sweater on his body.

It’s the big smiling face and those big bulging muscles under the shirt that got fans calling Najiani “unrecognizable.” Many then say Nanjiani is using steroids to obtain that body.

“Someone needs to keep kumail from the steroids, man,” wrote one Twitter user.

“It’s also funny that’s as big as he can get with that much steroids,” wrote another.

someone needs to keep kumail from the steroids, man

Keep in mind, this isn’t the first time that people have claimed that Kumail Nanjiani used steroids.

“Can we talk about how you definitely used steroids?” one twitter user posted last December.

“You used to be a comic, before you became and activist,” wrote another. “But for a guy who doesn’t like masculinity, you got shot full of steroids to get your last role.”

All this talk over Kumail Nanjiani’s body started after the actor revealed in December of 2019 that he’d gone through a major change. In preparation for his role as Kingo in the upcoming The Eternals movie. The film was initially set to release in November of 2020, but then the coronavirus pandemic pushed the film’s release back.

Can we talk about how you definitely used steroids?

Thankfully, Nanjiani wasn’t just hit with hate and ridicule. He also received support from fans. Several fans, came to Nanjiani’s defense and stated that the actor didn’t deserve the ridicule. After all, Marvel is known for pushing its actors through tough fitness and dietary schedules. That way, the actors are at tip-top, and otherwise unobtainable, shape for filming. How else would they get cut models for those famous shirtless scenes? Many fans also threw in the argument that the only reason Nanjiani is receiving ridicule is that he’s not white.

Henry Cavill was able to get HUGE for man of steel without steroids. He has said this publicly.

So it’s impossible that Kumail Nanjiani had the same result from hard work and exercise? And Cavill looks slightly larger than Nanjiani at 1 point?

After Chadwick Boseman’s death there was a lot of talk about “never make fun of people’s bodies, you don’t know what anyone’s going through” but Kumail Nanjiani posts like. an average picture of himself eating dinner and that’s our the window I guess

But first, we have to dig deeper into the topic of fitness and steroids in Hollywood. Again, big studios will pay for actors to exercise and get in the best shape of their life. This is something that Kumail Nanjiani acknowledged when he revealed his results.

“I would not have been able to do this if I didn’t have a full year with the best trainers and nutritionists paid for by the biggest studio in the world,” he wrote. “I’m glad I look like this, but I also understand why I never did before. It would have been impossible without these resources and time. So big thanks to @grantrobertsfit who started working with me at the beginning of the year and made me understand true physical pain for months and months. Then, once we started shooting, a massive thanks to @davidhigginslondon and his team (@ellispartridge, @thebeardypt, @tomcheesemanfitness) for training me almost every day and making me strong, limber and injury free. I can almost touch my toes now. (And thank you for forcing me to do cheat meals David.) Matthews Street Catering for their delicious and healthy meals. And finally, the biggest thanks goes to @emilyvgordon for putting up with me complaining and talking about only working out and dieting for the last year. I promise I’ll be interesting again some day.”

Kumail Nanjiani isn’t the only person to express the reality of actors and their peak bodies. It’s Always Sunny in Philadelphia actor/creator Rob McElhenney expressed similar sentiments after he made his own transformation.

“Look, it’s not that hard,” he wrote. “All you need to do is lift weights six days a week, stop drinking alcohol, don’t eat anything after 7pm, don’t eat any carbs or sugar at all, in fact just don’t eat anything you like, get the personal trainer from Magic Mike, sleep nine hours a night, run three miles a day, and have a studio pay for the whole thing over a six to seven month span. I don’t know why everyone’s not doing this. It’s a super realistic lifestyle and an appropriate body image to compare oneself to.”

The thing is, people don’t realize just how unobtainable and unmanageable those bodies are if you don’t have a studio paying for it. Jason Momoa, an actor who is highly regarded as muscular and sexy, had a similar situation to Nanjiani’s. In 2019, people started body shaming Momoa because he had gained weight after his successful Aquaman film. The thing is, actors typically gain weight after they stop filming for high profile films. They have the time to relax, eat some unhealthy food, and not care so much about their appearances. IT’S NATURAL!

Okay Jason Momoa, most of the time doesn't have a six pack.
Still considered one of the hottest man on Earth.

He's married but I'm pretty sure he still cares what he looks like. pic.twitter.com/mZlkzOz7ql

So apparently people are shaming Jason Momoa's Dad bod… you know the body where he looks like an above average fit man instead of a Spartan Warrior? pic.twitter.com/7s51iv3xC5

Though, do some people have a fair point? Some less hostile accusations bring up features on Nanjiani’s body that show a possible use of steroids. One being Kumail Nanjiani’s head and face changing shape.

Just as Hollywood pays for big-name actors to exercise and diet right, there are also rumblings of steroid use. Actors occasionally go through a cycle or two of using steroids if exercise and diet alone isn’t doing the trick or isn’t fast enough. For the most part, though, many Hollywood professionals refute this claim.

If this were true, you could argue that Hollywood is pushing unhealthy and unobtainable depictions of the human body. And if so, they should just be open about it so nobody developed body issues based on lies.

Body shaming Kumail Nanjiani for…being jacked? Is way weird. Especially since all the Chris’ have done the same super-soldier program and never got any flack for it. I wonder what the difference is? pic.twitter.com/NIeUf3DwAb

But on the flip side, these steroid accusations do come off as hostile and not merely about the lack of conversation on steroids. And underneath many of those initial tweets is a layer of racism.

As one Reddit user wrote when the topic got hot online:

“it's interesting people seem more ‘concerned' about this, whether it might have something to do with how people view South Asian men a little emasculated. Or maybe they simply have more or a connection to the actor? These films even get Tom Holland ripped for roles. I suppose the real difference though is Nanjiani is the one making a huge point about showing his body off. He was clearly insecure before and feels the big man now or wants validation. These other dudes getting ripped aren't making as big a thing about it.”

While that comment itself comes off as hostile, it does have some point. These calls for steroids and jokes at Nanjiani’s expense are based on the racist belief that White men can get away with the use but South-East Asian men can. And that has to end.

In the end, leave Kumail Nanjiani alone. The man isn’t flaunting his body any more than any other male celebrity on the internet. Think of Chris Hemsworth, for instance. The Thor actor repeatedly posts pics/videos of himself shirtless or working out. And he gets away with it. Now, one just has to wonder why….