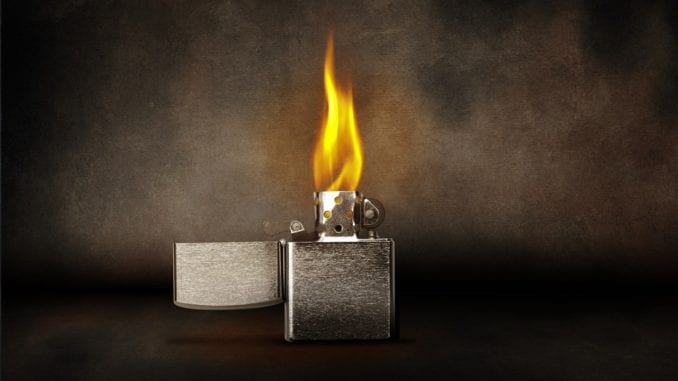 Slighter review for people who want to stop smoking

It might sound absurd – a cigarette lighter that can help you stop lighting up, but that’s the intention behind a revolutionary new product called the Slighter.

It’s a smart device from a Lebanese designer that helps you track your smoking habits. Essentially, it increases a person’s mindfulness about the habit of lighting up so that you can cut back and eventually quit.

How Does It Work?

Slighter works like a regular lighter, but it tailors a cessation plan to each individual after it learns how much you smoke each day.

When you want to light a cigarette, you must interact with the lighter and actively decide YES or NO.

So, instead of quitting by replacing the cigarette with other chemicals and techniques. Slighter trusts that you can quit yourself, if you just think about it more.

On your first week with Slighter, you light up as normal so that the device can learn your smoking patterns. Then, the device uses an algorithm to analyze your smoking behavior. Then, you use the app to plan a journey forward.

You tell Slighter what your target number of cigarettes a day should be and how long you think it will take you to reach it. All of this is tracked and visualized. You can also change it at any time.

Now, you’re all set to make progress toward your goal of quitting. When it’s time to smoke, Slighter gives you an alert.

The Slighter has a display screen that shows your progress as a percentage and lets you know how close you are to achieving your total amount of cigarettes for the day.

Don’t worry though. You can cheat if you want and light up as much as you want. However, the Slighter does keep track of how much you’re cheating.

“If you want to light up a cigarette outside the allotted time, you have to cheat,” says founder Samir El Gharib. “But by pushing that button, you have to admit to us, and to yourself, that you are cheating.”

The app is the best feature of this whole setup. You can find it in the App Store for Apple and on Google Play for Android devices. It syncs your smoking data from the device and creates easy-to-understand charts and graphs for you.

The gadget helps you to feel in control of something, and if you’re a smoker who’s trying to quit, then you know how difficult it is to exercise any lasting attempt at self-control.

There’s also a social aspect to the app. It has a leaderboard and a group tab that lets you see just how many people are trying to quit, just like you. Make new friends. Encourage each other and create a smoke-free circle all from the app.

Another neat feature of the Slighter is its Bluetooth connectivity and tracker.

You probably have lost dozens of lighters, but the Slighter will register the location of your last spark-up from the app. This isn’t a disposable device.

You’re going to want to keep track of it.

The developers of the Slighter recognize that you might need some extra encouragement on your journey, so the app also has merit badges that you can earn along the way. In truth, these are just little button-like graphics, but you’ll feel like you won a prize.

There are badges like “Social Butterfly” and “Non-Cheater”. Perhaps in the future there will be more tangible benefits to the Slighter Reward Program, but that remains to be seen.

Video below via Youtube as presented by Tech Crunch.

The Slighter is about the size of a remote key device for your car with dimensions:  3.07×1.81×0.55 inches. It weighs 67 grams. That feels about like a C-size battery in your hand.

Related: Is Crackle with downloading to your pad?

It has a micro USB port for charging, and it comes with a cable. The battery lifespan is 72 hours. It’s a butane gas torch. So, the Slighter performs its function quite well as just a regular lighter.

It’s windproof and refillable. It comes with an adjustment tool that will enable you to turn the flame height up or down.

The device itself is a bit pricy at $129. However, the slighter.com website has a calculator that estimates that the one-time investment you’re making in the smart lighter will cost less than other quitting solutions and the money you save on cigarettes will pay for the device in a short period of time.

The device isn’t available in stores just yet. You can only pre-order it through the company website for delivery later in the year.

There’s a 14 day return policy, but there isn’t a clear policy on warranties. The company website just mentions that the device is “covered by at least the minimum legal returns and warranty requirements for your territory.” Whatever that means.

The Slighter sounds like a great idea: tech engineers and cognitive behavioral therapists (CBT) have come together to design a method for quitting that utilizes something that is intrinsically linked to your smoking habit – your lighter.

You can snooze the cigarette alerts or skip them altogether if you don’t want to smoke.

The AI algorithm makes constant adjustments to your plan. You can even select the “Friend” function and light-up for your buddies without it counting against your progress.

There are some drawbacks though. For starters, the price is steep. It costs over a hundred dollars. Additionally, you can easily cheat the system and cheat yourself in the process.

It’s effectiveness as a smoking cessation method is dependent on your self-control. So, it’s just like any other method or technique when you boil it down to the essentials.

It’s a well-made lighter though. It’s sleek and stylish, making it a great gift idea for gadget-hungry friends who might also want to try a novel approach at quitting cigarettes. The app is well-designed and fun to use. So, give it a try if you can spare the coin.