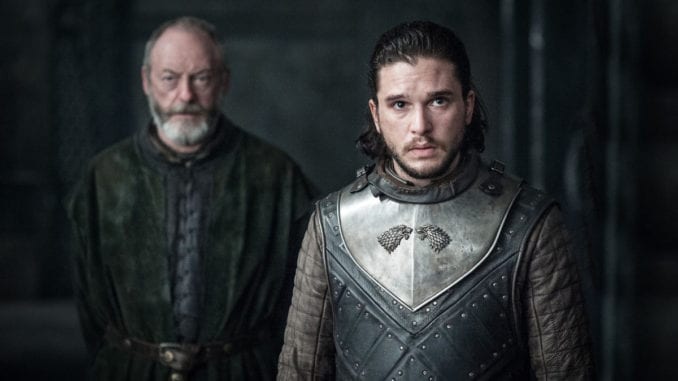 Are two Game of Thrones books just around the corner? Not likely, says their author.

As many Game of Thrones fans have become upset and disappointed with the final season of the HBO show, some are anxiously awaiting news of the novels and their canon ending to the series. Rumors and speculation then really started to heat up after one former actor shared a story about backdoor dealings.

Ian McElhinney, who played knightsguard commander Barristan Selmy, spoke while on stage at a Russian convention about the tv and novel series. Not knowing he’d start an internet trend McElhinney says that he heard something about the book series. Namely, that author George RR Martin has already completed the sixth and seventh books in the Game of Thrones novel series.

“George has already written books six and seven. And as far as he is concerned, there are only are seven books. But, he struck an agreement with David and Dan, the showrunners of the series, that he would not publish the final two books until the series has completed,” said the actor.

He then added, “So all goes well, another month or two, we might get books six and seven. And I’m intrigued to know, how Barristan, for instance, ends up going through those final two books. George, I talked to him during season one and he did say to me that Barriston had a very interesting journey. But unfortunately, I didn’t get to play all that, so we have to wait and see.”

For anybody who reads the #GameofThrones books, Ian McElhinney has said GRRM has finished books 6 and 7 already and waiting for the show to end and a few months later will release them…pic.twitter.com/zIjTJIFdfH

Related: Kit Harington Talks Hairstyles And GOT Changing Him

But, now the author himself has spoken up, through his blog, to say that story is total rubbish. Martin says that the theory proposed by McElhinney, who hasn’t been a part of the show for several years, is ludicrous.

“No, THE WINDS OF WINTER and A DREAM OF SPRING are not finished,” Martin explained. “DREAM is not even begun; I am not going to start writing volume seven until I finish volume six. It seems absurd to me that I need to state this.

“The world is round, the Earth revolves around the sun, water is wet… do I need to say that too? It boggles me that anyone would believe this story, even for an instant. It makes not a whit of sense. Why would I sit for years on completed novels? Why would my publishers — not just here in the US, but all around the world — ever consent to this? They make millions and millions of dollars every time a new Ice & Fire book comes out, as do I. Delaying makes no sense.

“Why would HBO want the books delayed? The books help create interest in the show, just as the show creates interest in the books. So… no, the books are not done. HBO did not ask me to delay them. Nor did [showrunners] David & Dan. There is no ‘deal’ to hold back on the books. I assure you, HBO and David & Dan would both have been thrilled and delighted if THE WINDS OF WINTER had been delivered and published four or five years ago… and NO ONE would have been more delighted than me.”

Sorry to all those fans excitedly thinking George RR Martin releasing two books was a real story. It seems that was just too good to be true.