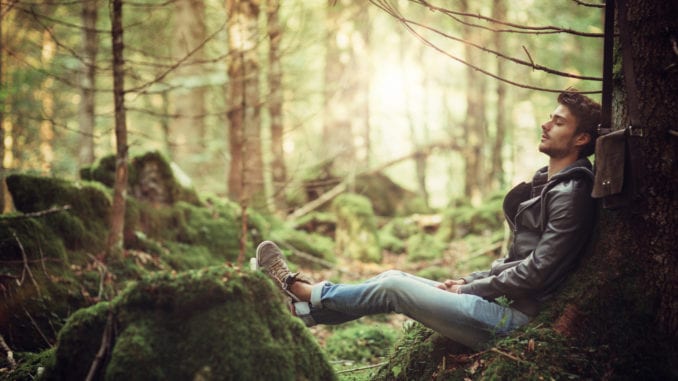 Men’s Variety spoke to licensed psychologist Dr. George Ball from Heritage Counseling and Consulting in Dallas about the research to gain his impressions.

“The main benefit of being outdoors is the radical change in context that most urban dwellers experience when they venture out of their established surroundings,” said Ball.

“Compared to the concrete jungle many people live in today, being outdoors is a 180-degree shift into a context that doesn’t involve traffic, email, and an internal sense of needing to be ‘on.” Being outdoors allows us to slow down, listen to our thoughts, and process the stress that many live with,” Ball added.

For this study, investigators asked 36 participants to spend time in nature three times a week over an eight-week period. Each participant determined the amount of time spent outdoors.

In addition, the participants also were able to choose when they would be outside and the location. Examples include spending time in a city park our walking along a hiking trail.

Before and after each excursion, saliva samples were collected from each volunteer to assess cortisol levels, a bodily fluid that contains biomarkers of stress.

While outside, each person was instructed not to use social media, talk with others, exercise or read.

After analyzing the data, researchers discovered significant drops in cortisol levels with the largest declines happening for people who spent 20 to 30 minutes walking or sitting in nature.

Moreover, the more time a participant spent outdoors, the greater the drop in their stress levels.

Ecologist Dr. MaryCarol Hunter, lead study author and faculty member at the University of Michigan shared the following about the research in a press release: ” Our study shows that for the greatest payoff, in terms of efficiently lowering levels of the stress hormone cortisol, you should spend 20 to 30 minutes sitting or walking in a place that provides you with a sense of nature.”

Previous research exploring the mental health benefits of spending time outdoors has revealed promising results. For example, a 2018 investigation appearing in The Journal of Positive Psychology showed that a person’s mood could be quickly lifted just by spending a few minutes outside.

“It is easier while outdoors to take a moment and notice what you are thinking, feeling, and doing as well as what your five senses are telling you,” reflects Dr. Ball.

Do you spend time outdoors? If so, has it reduce your stress levels? What benefits have you experienced?