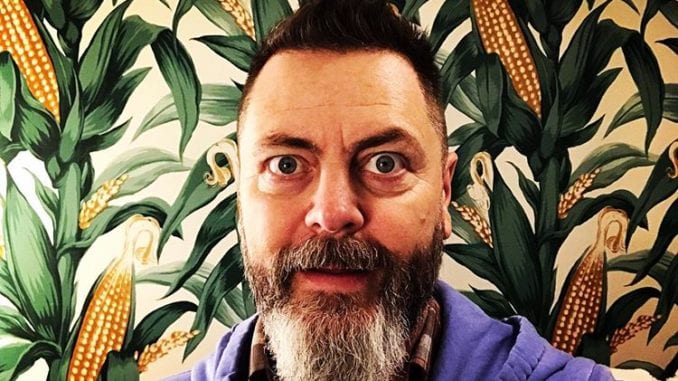 Nick Offerman is sharing his thoughts on what it means to be a “real man.”

Though his entire essence and persona exudes manliness and rough life, Offerman’s biggest claim to fame is his time working on celebrated comedy show Parks and Recreation. In that show, Offerman played the woodsy and authoritative Ron Swanson. A lot of Swanson’s characterization was based on Offerman’s own personality and life. For instance, Offerman has a workshop where he works with wood. A side-career that Swanson would respect with a silent nod.

But recently, Offerman appeared on the popular YouTube series “Hot Ones.” In the series, celebrities eat hot wings of increasing spiciness as they answer questions about their lives and careers.

To start off the video, Offerman shared that he identified with some of the words Swanson said during the show’s 7 season run.

“I think that makes a lot of sense,” Offerman said. “We're too mollycoddling in this modern age of consumerism where you are never left on your own to learn to survive.”

The interview then continued into Offerman’s thoughts on today’s modern sense of masculinity and manhood. Offerman recounted a time he had met Mr. T, an actor that he admired. To him, Mr. T was a great example of masculinity, both tough but also sensitive.

“He had this whole message of treat your mother right and use good manners, so I've always really loved, you know, a big tough guy who also was sensitive and promoted that,” he said. “So when I met him, I just was absolutely blown away.”

But again, Offerman is a man who likes to use his hands. He likes to work with tools to build things and he sees that as an important skill for everyone to have. Not just men.

“Things break, and those of us who know how to fix things when they break just end up being better, responsible members of our community,” he said.

The conversation then evolves into talking about language and feminism. And you probably guessed it, Nick Offerman is all about feminist rights. Like any man should be.

Show host Sean Evans asked the actor if he thinks saying “nutsack” was more appropriate than “p***y.” After all, which one can take a beating? In response, Offerman admits that he once engaged in “locker room talk” involving these words but has since stopped.

“I now stop myself,” he stated. “I don't want to do that because that, I think, fortifies the genderization I'm trying to work against.”

Ultimately, Offerman notes that what it means to be a man is changing. And, he’s happy to see it.

“Slowly, we're just going to have to keep evolving.”