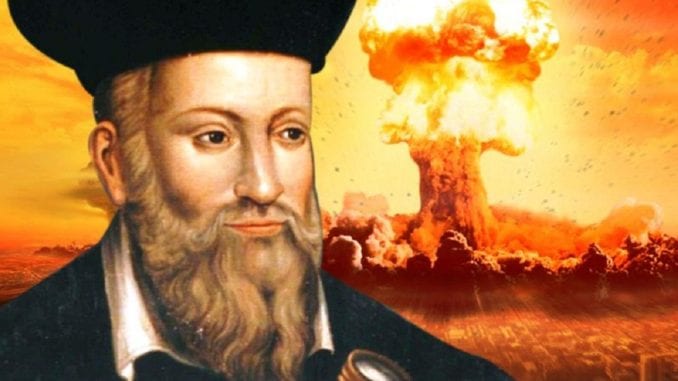 With the World Health Organization now designating Coronavirus a pandemic, some followers of Nostradamus are suggesting that the sixteenth century astrologer and physician predicted it happening.

That’s right – some folks are suggesting that Nostradamus saw COVID-19 popping up more than five-hundred years ago. Many believe Nostradamus was a prophet, gifted with supernatural powers to see far into future.

Part of the legend around this historical figure can be attributed to the 1981 film, The Man Who Saw Tomorrow, hosted by Orson Welles.

“Any fool can see that Nostradamus could see exactly what is happening now with this virus,” says Mackenzie Sage Wright, a blogger for the website Exemplore that we spoke to.

“None of us should be surprised at what’s happening. You can only trash the planet for so long before Mother Nature fights back. It’s called population control.”

So, what are some followers like Wright pointing too as proof that the French mystic predicted COVID-19? Simply put, the answer is a book that was published in 1555 called Les Propheties.

Inside, various quatrains (a verse) appear that are said to be predictive in nature. Here are a few followers have put forward as direct evidence:

Quatrain 63, Nostradamus penned: “From the vain enterprise honor and undue complaint. Boats tossed about among the Latins, cold, hunger, waves. Not far from the Tiber the land stained with blood, and diverse plagues will be upon mankind.”

Does this speak to COVID-19?

Some say yes. “Timber” is the name of the river that passes through the city of Rome. At present, Italy currently locked down, with more than 12,000 confirmed COVID-19 infections.

In quatrain 6, Nostradamus is said to have foreshadowed a plague in century II. He wrote: “Near the gates and within two cities. There will be two scourges the like of which was never seen, famine within plague, people put out by steel. Crying to the great immortal God for relief.”

In Quatrain 19, another reference to century II also appears:

Does that last sentence speak to a virus emanating in the East, such as China, weakening the West, such as the United States? Wright says yes. “What more proof do you need. It's right there in black and white!”

Related: The 2020 recession is already here

Men’s Variety spoke to social psychologist Dr. Steven Taylor about why so many people seem to think Nostradamus was speaking about the current pandemic.

“During times of crisis, it is only natural that people look for answers. They want to understand why a terrible thing might be happening. There’s absolutely no proof that Nostradamus could see into the future, but that doesn’t believers.”

Taylor goes on to say:

“There is a segment of society who refuses to look at science and instead, believes supernatural powers are at play. Many of these same people believe COVID-19 is “God’s retribution” against the planet for perceived sins.”

About Chris Farmer 21 Articles
Chris is a freelancer writer and journalist based in Chicago. Look for blog posts and investigative pieces focused on breaking news, men's health, business, entertainment and technology. Be sure to follow him on --->Facebook
Facebook