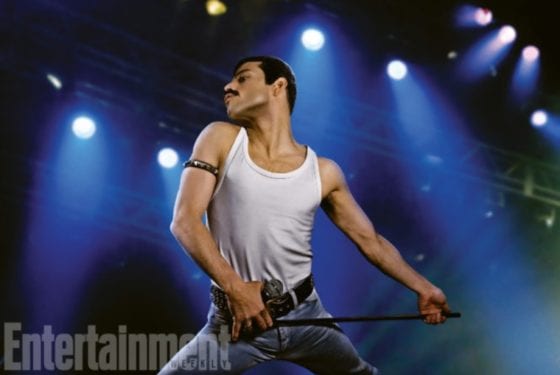 The upcoming Queen Biopic is on the way and its lead star Rami Malek is sharing his process for becoming music legend Freddie Mercury.

Bohemian Rhapsody is just around the corner, and many are concerned about the fact that Freddie Mercury’s sexuality may not be fully addressed. That said, the singer himself never really addressed it.

Mercury was an incredibly private man when it came to his sexunality. Even for his fellow bandmates, who say they were “very close as a group,” weren’t sure.

Despite having a good idea, they considered it to be none of their business whether Mercury was bisexual or not.

“The visitors to Freddie's dressing room started to change from hot chicks to hot men,” guitarist Brian May told the Times of London in 2017. “It didn't matter to us; why should it? But Freddie had this habit of saying, ‘Well, I suppose you realize this, that or the other,' in this very offhand way – and he did say at some point, ‘I suppose you realize I've changed in my private life?'”

Yet, his sexuality did become common knowledge without him ever giving word to it.

In any case, many are also worried that Mercury’s death to AIDS will also be washed over. That may be a more serious offense for the movie to make.

That said, many can agree on one thing. Actor Rami Malek looks great in the role.

Despite the tight lipped nature of the music icon, Malek says he was able to dive into the life of the man by researching old interviews and performances.

“I would consistently go back to his interviews and performances just to understand the [different] sides of him,” the Mr. Robot star told Entertainment Weekly. “Obviously, there is a very brave, brash entertainer who hits the stage. And then there is a human being who can be reclusive and lonely behind closed doors. It was a challenge just to correlate who this person was — someone who had grown up in Zanzibar and got shipped off to school in Bombay, and upon his return to Zanzibar, fled a revolution with his family and went to London. That type of childhood is emblematic of someone who is starving for identity.”

It seems that Malek put his heart and soul into the performance and perhaps his commitment to it and Mercury will be the film’s saving grace.

Outside of worries about the depiction of the character, there was also worry about the film’s production after Bryan Singer became disruptive to the process (just days before being sued for molestation).

That said, Malek says he was determined to see the film to completion.

“I can wholeheartedly say I would never let this film be unfinished,” says Malek about Singer’s firing. “Every moment where there was a challenge on set, I just reminded myself: What would Freddie do? And I guarantee, he would’ve seen it through.”

If for nothing else, it looks like Rami Malek is worth the ticket. Bohemian Rhapsody releases in U.S. theaters on November 2.