Rusty Joiner is one of those guys you have likely seen in print, on television or movies but aren’t quite sure where to place him. Open up most any supermarket tabloid and you will likely recognize Rusty as the Liquid Plumber Guy.

Yep – he’s the handsome dude with the light blue shirt, perfectly fitting jeans and scruffy face that’s staring back at you with massive biceps.

Because we like to focus on different male celebs (minor and major) here on the blog, we thought it might be kind of fun to give you some quick facts about this rugged looking model and actor so that the next time you put eyes on him, you’ll know a little bit more about who he is and his background.

Are you ready to find out some quick facts about Rusty? Let's jump right in!

Dreaming of our next beach trip! Sunshine come back to LA please!!! #Family is everything! #Grateful #Blessed #Fatherhood

Rusty Joiner was attending Georgia Southern University and was discovered by a scout. Given his muscular and magnetic look, he was quickly and easily placed with clothiers such as Abercrombie and Fitch, Levis and American Eagle. In this way, he is similar to other celebs who have found their beginnings as a model. Examples include people like Magic Mike star, Channing Tatum and Smallville star, Tom Welling. Oh yeah, Rusty was also was an underwear model for Structure from 1998-2000!

2 He was a Men’s Fitness Spokesman

This is an actor/model that is known for his physique. He is the former spokesman for Men’s Fitness “Fat to Fit Tour” program. Speaking of magazines, Rusty has appeared no less than 12 times on the cover of Men’s Fitness (including international). He’s also appeared in Vanity Fair. Rolling Stone and even Cosmo! 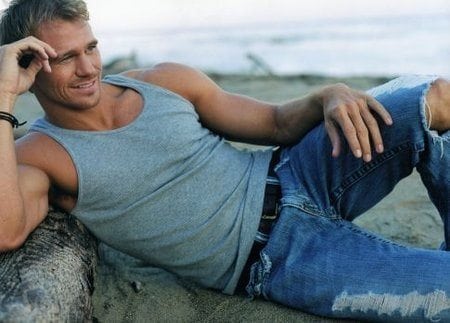 Yep – Rusty was born in Alabama and raised in Georgia, which has made some people stereotypically believe he’s socially conservative. That’s simply not the case – this actor is very LGBT friendly. Rusty is reported to have appeared in the Advocate Magazine (abs photo) according to Greg in Hollywood and used to tend bar at the now closed “I-Candy” in West Hollywood.

A quick check of Rusty’s Instagram account reveals the model/actor has a beautiful wife and super cute baby. Rusty and spouse Charity welcomed Cariss Alaina Walden Joiner into the world on 2/5/14.

5. He has an extensive line of credits

This actor and model has consistently found work in some form or another since 2000, according to his IMDb file. Here, we are talking about parts in television shows like Spin City to Melrose Place to soaps like Days of Our Lives. He continues to find work to this day. Check out his complete line of credits on the movie database.

So there you have it – a quick 5 point background on Rusty Joiner! We have included a video of Rusty below from his Instagram, just in case you want to see more of this particular man.

The day after Christmas. Count your blessings and choose to finish the year strong! Start the new year right. Restored. Rested. Recovered. Ready. #Ripped Day three: 5 sets of 50 Push ups & Abs Old School workout. Such a quick easy way to stay ahead of the Christmas and Holiday heavy calorie menu! Much love to all!! I want to give huge props to a great man that loves his family, loves the Lord, and is an incredible source of motivation @weatherford5 Thank you brother! #Believe #Endure #Overcome #Grateful