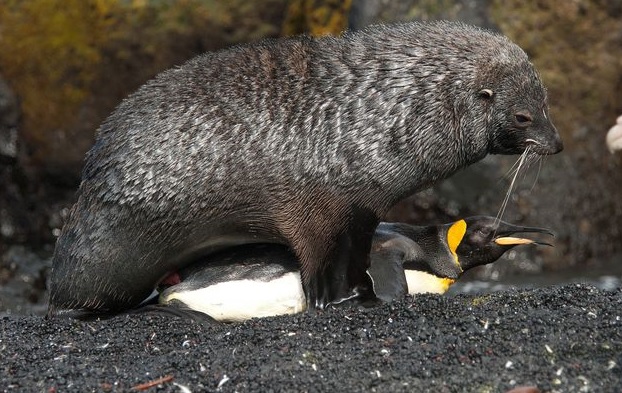 We often think of sexual assault in human terms. But can animals rape one another? Do males rape males? Moreover, can it happen between two different species?

The answer is apparently – yes.

Researchers have been shocked to discover that when some alpha seals are turned down for sex by females in their group, they can turn brutally aggressive.

Specifically, the agitated male will begin coercing nearby penguins to have sex with him. If all else fails, he will literally grab the first penguin he sees and start raping … regardless of gender.

More: “I was assualted by men in college”

The penguin victims, which are no match for the giant seal, must lay there helplessly as the alpha brutally levies his sexual assault.

The video below shows just one example. Caution, it is not easy to watch!

“Bottlenose dolphin males form gangs, corner a female and then take turns mating with her. If there are no females around, they take a young male instead. Competing groups of dolphins may raid rival territories for their females.

Studies in the University of Massachusetts, Dartmouth, on bottlenose dolphins in Western Australia showed that male dolphins formed alliances to guard the females of their group against rape.”

It turns out that other species also can be sexually aggressive, using their sheer power to overwhelm. In the case of monkeys, research shows some males have forcibly raped other males.

In the video below, there's an actual documented case of a monkey brutally raping a defenseless goat. He not only goes after him from behind, he does it from the front!

“In fact, when a female leaves the nest she whistles loudly, so that if her husband is nearby he can escort her.  No bachelors form part of the rape posse- all married males on the prowl.”