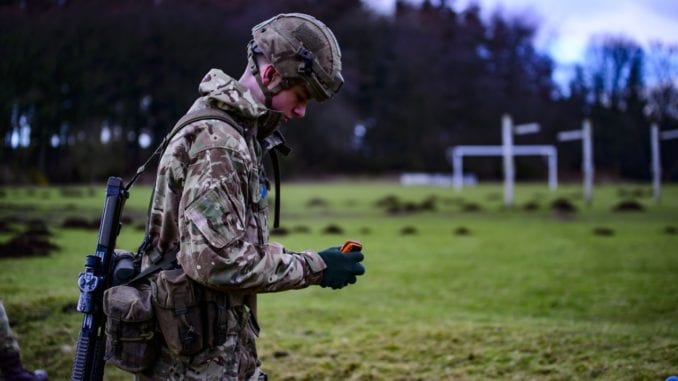 Did you know that if you are HIV positive and a member of the armed forces, you can’t be promoted to officer rank? It’s true. It’s the official policy at the Pentagon.

But this may soon change, thanks to a lawsuit filed by Lambda Legal and OutServe-SLDN on behalf of a Sergeant in the D.C. Army National Guard.

Sgt. Nick Harrison – a veteran of two overseas combat zones who was denied a position in the Judge Advocate General (JAG) Corps because current Pentagon policy considers service members living with HIV non-deployable, and will not allow them to enlist or to be appointed as officers.

The lawsuit challenges the Pentagon’s current policies preventing enlistment, deployment or commissioning as an officer if a person is living with HIV, and likely would affect implementation of the new “Deploy or Get Out” policy unveiled by the Trump administration in February.

After serving in Afghanistan and Kuwait, I knew I wanted to become an officer in the U.S. Army and a leader for all of the great men and women in our armed forces,” Harrison said. “I spent years acquiring the training and skills to serve my country as a lawyer.

This should be a no-brainer. It’s frustrating to be turned away by the country I have served since I was 23 years old, especially because my HIV has no effect on my service. It was an honor to be chosen to join the JAG Corps for the DC National Guard, and I look forward to my first day on the job.”

OutServe-SLDN is also an organizational plaintiff in this case to advance the interests of its members who are living with HIV and serving in the military.

In a companion lawsuit entitled Voe v. Mattis, Lambda Legal and OutServe-SLDN are representing an anonymous service member living with HIV who the Air Force refused to commission as an officer after he graduated from the Air Force Academy, despite recommendations from medical personnel to do so.

“Nick’s situation is the perfect example of just how archaic and harmful the military policies regarding people living with HIV really are,” said Scott Schoettes, Counsel and HIV Project Director at Lambda Legal. “These oppressive restrictions are based on antiquated science that reinforces stigma and denies perfectly qualified service members the full ability to serve their country.

The Pentagon needs to catch up with the 21st Century. Recruitment, retention, deployment and commissioning should be based on a candidate’s qualifications to serve, not unfounded fears about HIV. The U.S. Department of Defense is one of the largest employers in the world, and like other employers, is not allowed to discriminate against people living with HIV for no good reason.”

HIV, like migraines or thyroid disorders, is a condition managed through drug protocols that even the U.S Department of Veterans Affairs describes as readily available, simple and easy to tolerate, and that allow people living with HIV to live long and healthy lives.

Furthermore, the U.S. Centers for Disease Control and Prevention, in a letter released last September, noted that with proper treatment, a person living with HIV could suppress their viral load to undetectable levels, which results in effectively no risk of transmitting the disease.

Nevertheless, despite current science and medical advancements, most service members living with HIV remain classified as non-deployable under military policies developed in the 1990’s.

“Living with HIV today is much different than it was 25 years ago. Today, with appropriate treatment, there is no reason a person living with HIV shouldn’t be able to serve in any capacity in the military,” said Carlos del Rio, MD, professor of global health and medicine at Emory University and Co-Director of the Emory Center for AIDS Research.

“Nick has every quality Americans want in a member of our armed services: dedication, intelligence, and a burning desire to serve his country,” said Peter Perkowski, Legal Director of OutServe-SLDN. “The military has spent thousands of dollars training Nick to be a soldier, a lawyer, and a leader – now they are turning their backs on him.

The Air Force likewise spent tens of thousands educating Voe at one of the premier military academies in the country, yet then sent him packing. What happened to them could happen to any service member with HIV, especially given the DoD’s recent “Deploy or Get Out” policy.

It is time for the DoD to come out of the dark ages, update its HIV policies and revise its thinking on the deploy or get out mentality.”

The “Deploy or Get Out” policy was announced on February 14, 2018, and directs the Pentagon to identify service members who cannot be deployed to military posts outside of the United States for more than 12 consecutive months and to separate them from military service.

Because current U.S. military policy identifies service members living with HIV as non-deployable, they could face immediate discharge under this new policy.