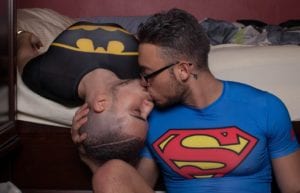 Have you ever heard of the gay panic defense?

If you haven’t, I’ll explain.

The gay panic defense is a trick sometimes used by defendants of hate crimes. The idea behind it is that straight men will panic if they are hit on or flirted with by gay men. That panic will take the form of a strong and violent impulse, which often leads to the assault or murder of the gay man.

Court cases have been going for decades in several countries where straight men have used this tactic to justify their crimes. And in the United States of America, only California has officially banned the act.

But, there are several organizations, like the American Bar Association, which condemn such a defense, and now an academy study has been enacted to disprove the defense.

The study was published in the journal Psychology & Sexuality, and was led by three researchers. Karen L. Blair and Maureen O’Handley of St Francis Xavier University in Antigonish, Canada, and Rhea Ashley Hoskin of Queen’s University.

How They Did It 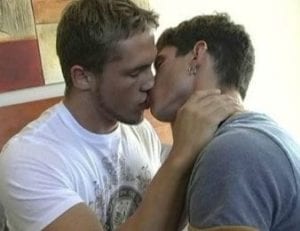 The way they went about it was by gathering 438 straight men from Utah between the ages of 18 and 45.

From that number, they then dwindled it down to 120 men through a blind selection. Those 120 men were then put into a room by themselves and asked to look at a bunch of pictures on a screen.

What did the pictures show? The six slide shows, each holding 30 images, showed either a straight or gay couple kissing or showing affection in some other way.

In addition, there was a control and stimulus section of the study as well. The 120 men were shown two slide shows of neutral objects and a single slideshow with the purpose of disgusting the subjects (pictures of maggots, rotting food, etc.).

Adding to all that, the images of the couples were made to give as unbiased a reaction as possible. All the couples were young, white, had average body sizes, and photographed in grey scale.

How They Were Rated 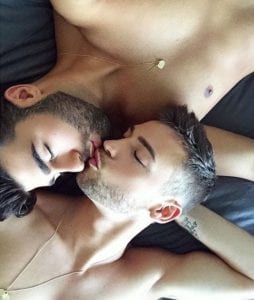 And the one most important piece of the puzzle? Their spit. That’s right, their spit.

The men were told to collect saliva during each slideshow and then release that into a vial at the end of each showing.

The researchers then tested the samples of alpha-amylase or sAA. Alpha-amylase is believed to be an indicator of stress and disgust.

Disgust is often associated with sexual prejudice and feeling trapped. As such, using this component of saliva was the basis for this entire study. 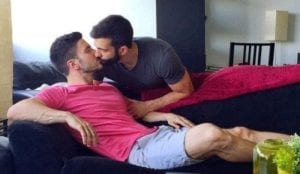 Upon getting the results back, the researchers found that there was in fact no difference between the men.Remove featured image

The men “did not display significantly different responses to images of male same-sex couples (kissing or engaged in PDAs) as a function of their pre-existing levels of sexual prejudice.”

This means that, straight men who are ok with gay men had the same reaction as men who are prejudice towards gay men.

In addition, it was found that, “all participants exhibited a stronger sAA response to the images of male same-sex couples kissing, regardless of their level of sexual prejudice.”

Meaning, all the men had some level of distress when viewing two men kissing or showing affection.

“The notion that highly prejudiced individuals may be experiencing some form of heightened physiological reaction when they encounter a same-sex couple that leads them to respond violently, or to “lose control,” seems unlikely given the pattern of responses within the current sample.”

“Clearly, most who experience a heightened sAA response to images of male same-sex couples kissing do not engage in violence towards gay men.”

While the study doesn’t completely debunk the idea of the gay panic defense, it does give some scientific backing towards disproving the idea and helping to banning it in court cases.

Feeling disgust and stress should never be the cause of attacking another person. This study has tried its best to help show that.