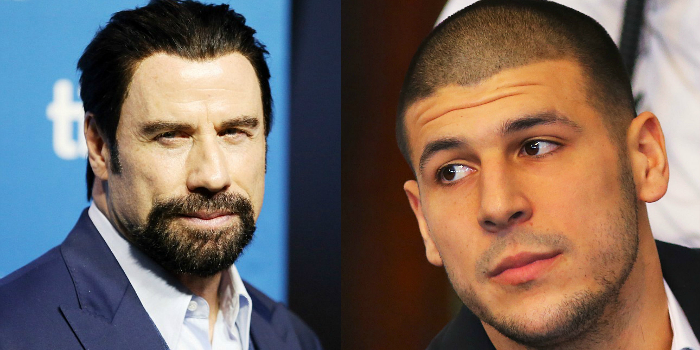 Word on the street is John Travolta went out on a man-date! That is if you read the cheap, tawdry and mindless National Enquirer like we do!

Let’s start with the first bit of gossip!

According to the May 8 edition of the National Enquirer, John Travolta “crushed on a piano playing hunk during a frisky man date”.

The tabloid rag offers a series of grainy pictures in side showing 63-year-old Travolta with a male pianist. The rumored “date” was Mikey Hennesy, a 64-year old a performer at the Naples nightspot, Barbatella.

Here’s a quip from the NE piece:

“John came in holding his iPhone while he was taking a video of me singing and playing, Mike told the Enquirer. Everyone was sitting around the piano bar, singing and having a great time!”

Travolta, apparently, was “very friendly,” according to Mike.

“It’s a sidewalk café so he came in as I was singing and playing,” said the piano vocalist. “I was playing ‘The Lady is a Tramp’ and he [John] seemed amused.”

It was then Travolta and Hennessy decided to take a picture together. Per the Enquirer:

“The two men sat together for quite a while, leading one onlooker to dish: ‘John looked very happy to be with Mike.”

In another line of information this week, Newsweek reported – and we quote, “Aaron Hernandez knew his prison boyfriend before either of them was locked up, says the attorney for that inmate.”

“Aaron Hernandez knew his prison boyfriend before either of them was locked up, says the attorney for that inmate.”

She also reported something else that was interesting and may receive more scrutiny in the future.

“The lawyer said Hernandez’s relationship with Kennedy was well-known, and discussed in letters the two exchanged—some in what Army called “code”—and others Hernandez sent to Kennedy’s father and siblings. Army showed a portion of one of those letters at the press conference.

The lawyer says Kennedy plans to talk about his very close relationship with Hernandez—who had been writing to Kennedy’s family since 2016—once he is released from a segregated unit of the prison.”

More: Gay for the stay

Mr. Kennedy, who in the Newsweek piece and in other publications is referred to as Hernandez’s boyfriend, made his first statements about the situation this week to the folks at Radar online.

“I miss my friend Aaron Hernandez. I’d like to send my condolences to his fiancée, his mother and his daughter.”

The Radar online piece goes on to say:

“Though the NFL great turned killer was engaged to the mother of his young daughter, Shayanna Jenkins, at the time of his suicide last week, Hernandez allegedly also romanced Kennedy, a 22-year-old armed robber and fellow inmate at the Souza-Baranowski Correctional Center in Shirley, Massachusetts.

So there you have it folks – a two items of cheap, useless gossip!