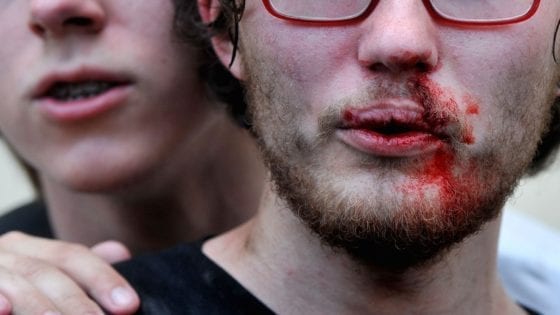 “There was blood everywhere”

According to a news report that appeared in the Star Observer,  two gay men were violently attacked – with one victim being cut in the face with glass –  by a Donald Trump supporter at a McDonald’s in Sydney, Australia.

Sam and Andrew [not real names] were in line to place their food orders when a man who was described as intoxicated began to talk out loud about Mr. Trump’s election to the presidency of the United States.

“He was saying things like how white men rule now that Trump has won, I was horrified,” Sam said.

Andrew, apparently sensing trouble, encouraged Sam to keep their distance from the intimidator.

But the rants continued, directly adjacent to the duo as they waited in line. Tired of listening to the racist remarks, Sam spoke out.

“I turned around to the guy and said ‘I’m gay – do you have a problem with that?’ and with that he went off.”

After the disclosure, the Trump supporter amended his racist tirade and tweaked it into a homophobic taunt. “Trump won, straight white men rule.”

Things began to escalate from there.

The man’s friends [Trump supporter] then had to restrain him as he tried to aggressively get over the top of them while pointing and shouting at the pair.

Eventually, the loudmouth was dragged out of the McDonald’s by the people he was with. Sam and Andrew remained, badly shaken.

But it didn’t end there.

Outside, the Trump supporter was waiting for them – apparently hoping for a physical altercation.

“I couldn’t believe it, he’d been waiting outside to pounce on me,” reported Sam to the Observer.

“He hit me on the head, and because I’m a pretty big guy, I went down hard – immediately there was blood everywhere.

“He kept mouthing off, but when he hit my head things went a bit blurry from that point.”

Andrew, who had been looking at his phone, saw Sam up against a wall.

“I looked up and he was bleeding all over his face. I quickly assessed him and could see that he was moving and blinking, so I knew he was okay in that moment.”

And then Andrew was viciously sucker punched in the face by the Trump supporter. He was then cut with a sharp object.

“Then as I turned around he hit me in the face. I didn’t fall over, but as I realized what had happened he struck me again with a piece of glass I think, as it cut my skin and I was bleeding.” Andrew, fearful for his life and Sam’s, decided to fight back. According to the Star Observer’s reporter, the Trump supporter looked like he wanted to “kill” the pair.

“I was trying to protect Sam because I knew he wasn’t capable of looking after himself, he was on the ground,” he said.

“When I fought back I didn’t feel so defeated in a way, I remember thinking to myself there are so many LGBTI people that have been killed by people like this, and I almost wanted to hit him back for those people.”

“He struck me again with a piece of glass”

The violent Trump supporter tried to flee the scene with his friends, but local police nabbed him before he could get away.

Sam was immediately taken to the hospital. Andrew went directly to the police department to give his official statement.

Apparently, there is video coverage of the entire incident from remote cameras; evidence that will be used against their attacker in a few weeks for a court procedure.

Since the election of Mr. Trump to the presidency, there has been a surge in hate crimes, according to data collected by the Southern Poverty Law Center.