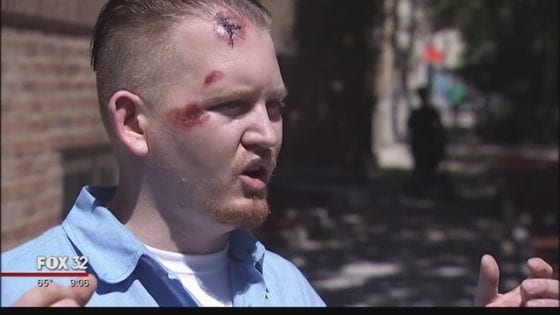 “It just hurts to know that somebody could be so hateful”

Chicago’s annual Gay Pride Parade is one of the largest in the country with nearly a million people attending each year. Sadly, even with tons of parade-goers around, a 21-year old man found himself brutally attacked at the event.

At times, he would extend his arms to strangers to give a hug.

Apparently, one person wasn’t feeling the love and Rakow now has 14 stitches in his head.

“It just hurts to know that somebody could be so hateful,” Rakow said. “To be at such an event that's so colorful and for people to be happy and for people to be able to celebrate who they are as a person and an individual and then you come here and something like this happens to you.”

Chicago Police are reviewing surveillance video from businesses along Broadway, where the three men may have ran to after the attack.

“My main wish would just be that they could catch the guy that did this to me so that justice can be served,” Rakow said.

The incident in Chicago follows a number of disturbing reports of violence and other homophobic behaviors related to LGBTQ Pride events.

You Tube star and LGBT advocate Calum McSwiggan was attacked at a bar by three men. Michael Volz, a Trans advocate in Seattle, was savagely beaten during a fundraising event for the victims of the Orlando massacre.

And a young gay couple heading to San Francisco Pride found themselves kicked out of an Uber after being called homophobic slurs (see story here).

According to FBI research, nearly 20% of all hate crimes are in some way connected to a person’s sexual orientation.