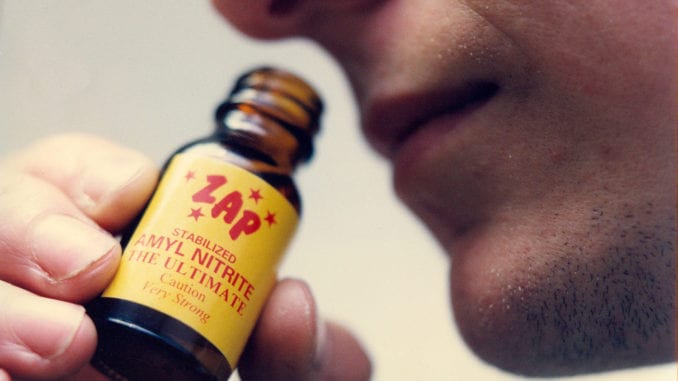 Poppers have been part of the “gay scene” since the mid-1960’s. Commonly sold in novelty stores as “head cleaners” and “room deodorizers”, these little brown bottles are most frequently used off-label to enhance sex.

While hard to put into words, many who sniff this inhalant will tell you that taking a hit during sexy time can make an intimate moment “epic”. To be fair, others say – not so much.

But what does the science tell us about poppers? Have there been studies to examine their safety? And for that matter, do people still use them?

Given interest in the topic, Gay Pop Buzz set out to find the answers. Using a combination of data mining, coupled with good old fashioned research, we’re ready to reveal 10 facts about poppers you probably don’t know.

Before continuing, it’s important to keep in mind that within the universe of “party favors” that people sometimes use to amplify sex, poppers are considered among the least dangerous.

That’s not to say nitrates don’t present certain health risks. As you will find out, they do.

1. Poppers are a slang term

The term “poppers” became woven into gay lexicon during the late 1960’s. It became popularized after many men described an exhilarating “pop” shortly after inhalation.

When you peel away the slang, poppers are really a broad based term used to describe a chemical class known as alkyl nitrites.

Over the years, they the actual liquid inside of the bottles have contained amyl nitrate, isoamyl nitrite and isopentyl nitrite, respectively.

Back in the 1970’s (paleo-gay era), poppers were all the rage at the discos and bathhouses, where gay men took “hits” off the tiny bottles to amplify the experience of music and dance.

Once exclusive to the gay community, poppers have now become popularized among men and women who identify as straight.

3. Almost became illegal in the UK

Not so long ago, poppers almost became banned in the UK. Had it not been for strong advocates in parliament who worked hard to keep this drug (and several others) legal, the liquid substance may very well have been executed.

“I use poppers,” said British Parliament member, Caspin Blunt, as he presented arguments in defense of poppers. “I out myself as a poppers user. And would be directly affected by this legislation. And I was astonished to find that it’s proposed they be banned and, frankly, so were very many gay men.”

As reported in The Guardian, the bill failed on a technicality.

4. Some gay men say it helps with bottoming

While not exclusive to gay men who like to bottom, many who inhale the fumes from the bottle claim they help to make the moment special.

“When a guy I hooked up with regularly offered I decided to try them and boy oh boy did I enjoy it. Makes bottoming…amazing.” – Reddit.

There is scientific evidence to support these types of claims. As mentioned in the Health Professionals Data Sheet, “Amyl nitrite causes a non-specific relaxation of smooth muscle.”

FYI: Smooth muscles can be found in the sphincter of the anus.

5. There have been popper related deaths

As crazy as it might seem, there have been deaths associated with the use of poppers. However, in nearly all of the reported cases, the morbidity rates were directly linked to accidental ingestion as opposed to inhalation.

When a person ingests poppers, usually in the horizontal position, the individual runs the risk of developing cyanosis. This condition causes oxygen levels in the blood to drop rapidly. In serious cases, death can occur.

Another condition, methemoglobinemia, has been associated with accidental ingestion (or aspiration). Here, the person's body struggles to bind oxygen to hemoglobin in the blood. This too, can lead to death.

Generally speaking, popper related fatalities are rare. There have been reports, however, of “new poppers” that contain high levels of nitrates which may cause serious health problems.

Aside from the distinct possibility of splashing poppers into the eye during horizontal inhalation, the liquid has also been tied to non-spill related vision problems.

There have been documented cases where individuals have experienced blurry vision after continued use, as reported in this Live Science article.

The New York Times (NYT) also ran a piece that featured ophthalmologists who wrote letters to the New England Journal of Medicine to warn the public about their use.

During the early days of the HIV crisis, many thought poppers were somehow linked to the onset the opportunistic infections, Kaposi's Sarcoma. Numerous studies have been conducted to prove this theory but there’s never been a definitive consensus.

What the research has demonstrated, however, is use of substances like inhalants can lead to risky sexual behaviors. But this is true of any substance, including drugs like marijuana or GHB.

8. Technically requires a prescription in U.S.

Originally marketed as a prescription drug way back in 1937, amyl nitrate (poppers) could only be obtained under doctor’s orders. In 1960, the U.S. Food and Drug Administration removed the requirement because of its safety record.

Largely linked to societal homophobia, the requirement for a prescription was reinstituted in 1969. The official reasons given by the government included worries over “increased recreational use” and concerns over “public health”.

Unofficially, many felt the FDA was taking a swipe at homosexual men.

Some people claim they are unable to use poppers because of unwanted side effects. While current statistics are hard to come by, the present thinking suggests that only around 3% of the U.S. population uses poppers.

According to the large swath of clinical data, the most common side effects reported with popper use include: headache, loss of erection during sex, sweating and mild congestion.

When combined with a vasoconstrictor, such as Viagra, these symptoms can become amplified.

Legally, residents of Canada are not able to buy or use poppers. Sales that are not authorized can be punished by fines and if warranted, imprisonment.

But that’s not stopping the Canucks from getting the inhalant.

Many buy what they need through the black market and via distributors who sell them online. And some places still sell them as “odor neutralizers” and “cleaners”.

Just for fun, we’ve decided to put up a poll that asks you some questions about poppers. Please select one of the choices that best describes your situation.

All votes are anonymous. Be sure to check back from time to time to see how your pick compares to other website visitors!