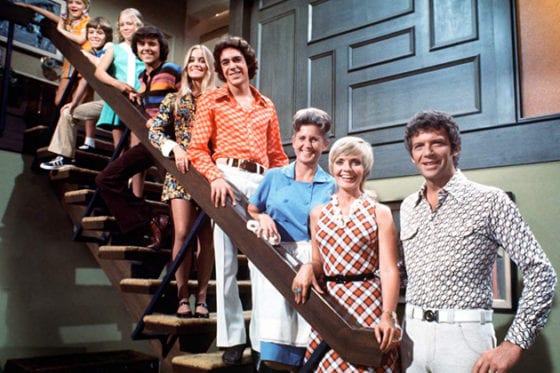 The Brady Bunch is part of our cultural fabric. How many of these facts about the cast do you know?

There’s probably not a person on the planet who hasn’t watched at least one episode of The Brady Bunch. The iconic 70’s sitcom ran from 1969 – 1974 on ABC. While the show was never a ratings bonanza during its five year run, it has since become a cultural phenomenon.

With recent talk of a Brady Bunch reboot, we thought it might be kind of fun to present 20 Brady Bunch cast facts you might not know about the show.

1. The show’s concept came from a newspaper statistic

Sherwood Schwartz, producer of the Brady Bunch, is credited with once saying: “It's very rare that a writer knows exactly where his ideas come from.”

In the case of The Brady Bunch however, Schwartz knew exactly his source for inspiration.

Apparently, he saw a tiny piece in the Los Angeles Times that stated in the year 1965, 31% of all marriage involved children from previous marriages.

That bit of information eventually would lead to Schwartz conceptualizing a television show called, Yours and Mine. He tried to get the three major networks of the time to pick it up but was given a collective thumbs down.

It was only after the movie, Yours, Mine and Ours starring Lucille Ball and Henry Fonda became a success at the box office did ABC show interest.

Originally, it was called “The Brady Brood” but later was changed to the name we all know and love, The Brady Bunch.

2. Tiger was run over by a car

Do you remember during the early episodes that the family had a dog named Tiger? Wasn’t he super cute?

Well, it turns out that Tiger was killed by a careless driver during filming of the episode, Katchoo (the one where Jan thinks she’s allergic to Tiger).

As the story goes, the dog’s trainer apparently took Tiger out for a walk on the Paramount lot when someone accidentally struck and killed him.

A faux Tiger was found but he didn’t last long on the show because he was frightened by everything on the production set, including bright lights.

3. Robert Reed was the second choice for Mike Brady

Believe it or not, Robert Reed wasn’t Schwartz’s first choice to play the role of Mike Brady. Instead, Gene Hackman was considered for the part but it never happened.

Reed was ultimately picked for the part because we under contract with Paramount. He also had some amount of notoriety after appearing in the successful legal drama series, The Defenders. Speaking of Robert Reed, be sure to read our extensive list of 25 facts you might not know.

Believe it or not, actress Joyce Bulifant came within an eyelash of playing the role of Carol Brady. You may recall Bulifant in the role of Murray’s wife on The Mary Tyler Moore Show. The reason Florence Henderson was ultimately picked for the part of Carol is because of casting dynamics.

After award-winning actress Ann B. Davis agreed to play the part of Alice, executives thought they needed a different personality for balance. And the rest is history because Texas born theater star Florence Henderson got the gig.

5. Carol was wearing a wig during season 1

If you look closely, you can probably tell that during season 1 of the Brady Bunch, Carol was wearing a wig. The reason is because when they started filming The Brady Bunch, she was coming off a part in an off Broadway revival of South Pacific.

Want another interesting fact? The producers of The Brady Bunch filmed the first six episodes without her. Yep, she was in Denmark wrapping up filming of The Song of Norway, according to an interview she gave to NPR back in 2014.

Check out the video below. It is pretty obvious.

Didn’t you think Cindy’s hair was extra cute? Well, the color of her golden locks didn’t happen by chance. In real life, Cindy (Susan Olson’s) hair was not blonde enough for producer’s liking. During season one, she was forced to bleach it.

Problems soon arose when her hair started to come out in big clumps. After she cried and begged Schwart to leave her hair be, the order was given to the treatments.

If you watch the various seasons, you will notice that Cindy’s hair becomes progressively darker.

Many viewers of the Brady Bunch do not know this but Bobby wasn’t a true brunette. In real life, his hair color is blondish. But because of the harsh studio lights, producers had a hard time matching his hair color to the other boys.

The end result was Bobby (Lookinland) having to endure numerous dye jobs in a variety of colors so that he had a similar hair color to his television brothers.  If you look at Mike Lookinland’s hair today, you will notice it’s nowhere near as dark as it was on the Brady Bunch.

8. Robert Reed was a defacto father to the Brady kids

The tele-family portrayed on TV might have seemed corny at times but in real life, Robert Reed was very much a father to the kids.

He even took them all on a trip to London. Both Cindy Olson and Mike Lookinland have shared in interviews that Reed was at times more of a dad to them then their real life biological fathers.

9 Cindy really had a lisp

Susan Olson had to work with a speech therapist during filming of the Brady Bunch because she had problems forming “S” words.

In fact, the problem went on until she was 19-years old. It was only after undergoing surgery that the issue abated.

10. Greg (Barry Williams) once showed up high on set

Barry Williams apparently went through a stage where he experimented with illegal substances. Not unusual for kids his age at the time.

In a blog interview, a person asked: “Ater you were stoned on the “Law and Disorder” episode, did you ever use weed again? Thanks!!!!!!”

His response: “I went through a stage of experimentation as a kid. I certainly never went to the set high again but I don’t like weed. It makes me feel dumb, paranoid and hungry. I have better things to do.”

11. Cast members crushed on each other

No accounting of Brady Bunch facts would be complete without mentioning some of the crushes that cast members had for one another. Greg (Barry Williams) revealed in his book Growing Up Brady that he shared his first kiss with Maureen McCormick (Marsha) during season four.

Remember when they all went to Hawaii? Well, that’s when it happened. Now you know why in the movie,  A Very Brady Sequel, there was a ridiculously funny theme where Greg and Marsha became sexually attracted.

And speaking of Greg – it does appear he had a crush on his T.V. mom Carol (Florence Henderson).

While most of the other cast members could pull off some type of tune, Christopher Knight (Peter) couldn’t hit his notes. He has acknowledged as much in public interviews.

Here is what he said on the show The Improper Bostonian: “Singing, by far. It was traumatic.” In fact, his singing was so bad that he was encouraged to lip-synch by producers.

Remember the episode “Dough-Re-Mi” where the kids sang the song: Time To Change?. That’s the one where Peter’s voice cracked.  Guess what – that situation wasn’t too far off from the truth because Christopher was growing into puberty.

Here is what he shared about the episode: ““That whole episode where my voice changing was them just pointing out that I couldn’t sing. My first experience with depression was that week.”

According to online reporting at Mental Floss, Marsha really did get hit with a football but not by Peter.

“Christopher Knight was unable to hit his target when filming the crucial football-tossing scene in “The Subject Was Noses” (a.k.a. the “Oh, my nose!” episode). So Schwartz stepped in off-screen, threw a perfect spiral, and pegged Maureen’s nose with the pigskin in one take.”

14. Jan started to develop hooters and Cindy got jealous

Eve Plumb apparently started to develop during her time on Brady Bunch. To make a long story short, her ta-ta’s blossomed when she was 16. This caused Christopher Knight and Mike Lookinland took notice.

According to a Daily Mail piece, Susan Olsen felt like she wasn’t getting any attention – and wasn’t happy.

While they may have made for a cute couple on television, in real life Florence Henderson knew that her on air tele-hubby was gay.

Said Florence in an interview: “I think had Bob not been forced to live this double life, I think it would have dissipated a lot of that anger and frustration.”

Here is an interview with Florence Henderson where she talks about it.

16. Carol Brady was supposed to have been divorced

Remember how the show explained why Mike was single because he was a widower? But if you paid close attention, didn’t you find it odd they never mentioned why Carol was on the market? There is a reason for this.

Back in the late 60’s and early 70’s, divorce was still considered taboo. The end result was that the writers never offered the true reason why Carol was single. Years later, it finally came out that she was supposed to have been a divorced mom.

FYI: Carol Brady’s last name from her previous marriage was Martin and her maiden name was Tyler.

17. Robert Reed was written out of final episode

It’s no secret that Robert Reed and the show’s creator, Sherwood Schwartz had lots of disagreements. But did you know that it got so bad that Reed was written out of the final episode. Yep, it’s true.

Reed didn't care for the storyline involving Greg's hair turning orange due to tonic. The two got into a heated argument and apparently, studio security got involved. They offered to remove Reed. That never happened because Schwartz didn't want the Brady kids to witness such a trauma. The end result was that Reed was written off the final episode.

There was actually a cat on the show named Fluffy. You might have missed her because the feline only appeared in the pilot episode.

Watch The Brady Bunch: The Honeymoon and you’ll see the kitty!

People often wonder if Ann B. Davis (Alice) ever married someone in real life. Some people have wondered if she was a celibate lesbian.

What we do know is that she never married and became heavily involved in the Episcopal Church. There is no known record of a romantic romance.

Well, unless you count her TV- boyfriend, Sam the butcher.

Ann B. Davis tragically died after falling in the bathroom and hitting her head. She was 88 when she passed away on June 1, 2014.