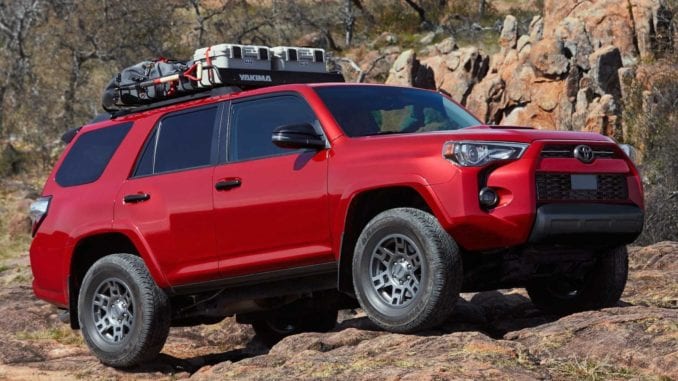 The 2020 Toyota 4Runner is a big, lumbering beauty. Its chunky paneling, solid body-on-frame architecture and serious off-road chops might astound people who have become accustomed to smaller, more nimble crossovers. However, weekend warriors and old school drivers will see some true grit in this updated behemoth.

Introduction to the new 4Runner from Toyota

The Toyota 4Runner doesn’t seem to bow down to modern conventions. It hasn’t gotten smaller. It hasn’t lost its 4-wheel drive.  The design hasn’t sprouted an abundance of cuts, swoops and unnecessary mesh in the front grille either. Instead of changing the program, the 2020 Toyota 4Runner has updated the safety and technology equipment.

There are 8 models available for the 2020 Toyota 4Runner. There’s the base model SR5 and SR5 Premium. There’s the TRD Off-Road, TRD Off-Road Premium, and TRD Pro. There’s the Limited model and two special editions – the Venture Special Edition and the Midnight Edition.

Here are a few things that separate the TRD Pro from the pack. On the exterior, it has a signature front grille design, TRD wheels, roof racks, LED fog lights, heated mirrors, and power sliding moonroof. On the inside of the TRD Pro, you’ll find TRD badges, signature seats and floor liners, as well as a TRD shift knob.

You’ll also have the same 15 speaker premium audio and navigation package that comes with the Limited. That’s a plus.

Now, when it comes to off-road capability, this vehicle steps it up a notch. The TRD Pro 4Runner has TRD-tuned front springs and TRD high performance shocks. The 2020 4Runner sits half an inch higher with the TRD Pro and there’s almost an inch more between the wheels on each axle.

The TRD Pro is also equipped with premium all terrain tires. It would be interesting to see a head-to-head match up against the Jeep Wrangler or the new 2020 Land Rover Defender. It’s likely that the 2020 Toyota 4Runner TRD Pro at least matches their capabilities.

Safety Features of the New 4Runner

Toyota has one of the most comprehensive safety packages on the market. The Toyota Safety Sense suite comes with pre-collision technology. It’s got pedestrian detection, lane departure alerts, automatic high beams, a sway warning system, and dynamic radar cruise control.

Automatic emergency braking, adaptive cruise control, and blind-spot monitors are new for this year’s 4Runner. Every 2020 Toyota 4Runner comes with Toyota Safety Sense. There’s no bundling or packages that come at an extra cost.

Each 4Runner also comes with several electronic stability control systems, a full complement of advanced airbags, an anti-theft system, tire pressure monitoring, and child protector doors and locks. Just about every safety feature you can think of comes standard. The only exception is the front and rear parking sensors. Those can only be found on the Midnight Edition and Limited.

Otherwise, the 2020 4Runner might get lost in the competitive field of futuristic features and soft materials. There aren’t any wireless charging stations. The touchscreen could be a touch larger. There’s no Nappa leather or Maple woodgrain trim.

These are small creature comforts, but they make a world of difference when comparing the 2020 Toyota 4Runner with other large luxury vehicles that also have 4-wheel drive capabilities.

For people who frown upon the current trend of rounding the edges of rugged SUVs, the 2020 Toyota 4Runner will seem heaven sent. For those who insist on changing with the times, it will fall short of glory. That’s unfortunate because the 4Runner does off-roading so well. For the price, the TRD Premium is a value buy for people with an adventurous style.

Otherwise, the 4Runner could be better suited in a museum with the rest of the dinosaurs.