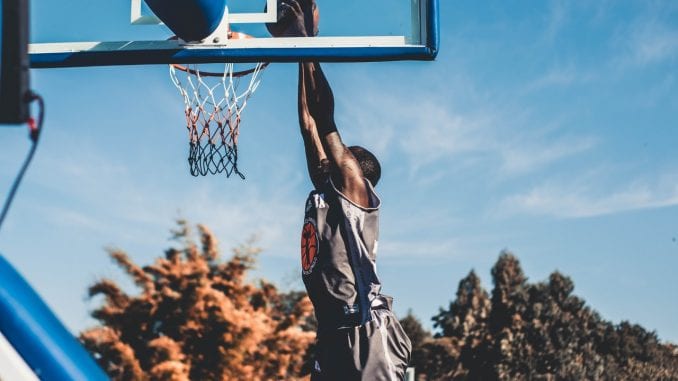 Lifting weights at the gym with your battle buddy can get repetitive. You spot him. He spots you. He complements you on your tricep gains. You point out how big his calves are getting. Maybe it’s time to switch the routine and try a different type of workout.

We’ve been clamouring to get back into the gym since the pandemic, but does it live up to what you imagined? You might still need to wear a face covering and people just don’t congregate like they used to. At least, that’s been my experience.

So, I decided to ditch the gym rut with my training buddy and try something different. Together, we skipped the gym on our regular training days and tried a different sport every week. Although I wasn’t targeting specific areas of my body like in the gym, I was having more fun.

My workout partner said the same thing. He was sore in different places and enjoyed the challenge of playfully competing instead of just complementing each other on our gym sets. So, if you’re looking for a way to get out of the gym rut, tag a friend and head out for some of these partner sports.

Related: Here’s Why You Should Workout with a Partner

Here are a few ideas.

Basketball is such a versatile sport. You can find a court in nearly any neighborhood and play with as few as two players. You can play indoors or outside. Plus, dribbling and shooting the ball takes coordination, dexterity, practice, and skill.

If your goal is to break a sweat, then basketball will certainly burn a ton of calories for you. When you play basketball with a buddy there are plenty of ways to get a workout. There are a ton of side games such as horse, around the world, and twenty-one.

Let’s take the game of horse for example. The goal is to score points in such a way that your partner can’t match you. Basically, you’re trying to score a difficult shot. If your opponent can’t score the point in the same way that you did, then they get a letter. If you miss five shots, then you’ve spelled out the word “horse”.

Parkour is one of my favorite physical activities, but my gym buddy had never tried it before. I’ll admit, it’s not the sort of activity that you just casually pick up one day. If you want to get into parkour or freerunning, then you should link up with other practitioners or take a class. American Parkour is a great online resource to find other people in your area who practice parkour and find tutorials.

We started by just going to the local park and finding a spot to jump on things. I showed him the basic vaults and moves. Then, we just played around with our movements. We played a game of parkour horse where he would try to do the same moves that I did. My training buddy was grinning from ear to ear because we just had so much fun.

What surprised him the most was how sore he felt the next day. His calves, buttocks, abdomen, arms, everything felt like he had a proper workout. That’s because parkour is all about functional fitness. You’re using the stabilizer muscles and the muscles of the posterior chain a lot. It sure beats doing 2 sets of 20 leg presses.

Martial arts have been a part of my life for more than 10 years. I practice every week, but my gym buddy doesn’t go near the mats. He just likes to lift weights and run on the treadmill. I suggested that he skip all of that and join me for some sparring. After the fun he had doing parkour with me, my partner was willing to try some kickboxing. Plus, he was willing to try something different to meet his weight loss goals.

First, we put on full protective gear and gloves. I started him out on the heavy bag just getting used to throwing some punches and kicks. He was surprised at how winded he got from a couple of 60 second rounds. According to Ace Fitness, an average sized man can burn 362 calories in half an hour doing sparring.

After he got comfortable hitting the bag, I suggested that we try some sparring. He was hesitant at first, but we set up clear boundaries such as no head shots and only 50% power. I thought he wouldn’t like it, but my gym partner seemed to enjoy making contact with my body. We were both drenched in sweat and felt like we got both a strength workout and a cardio workout in one.

Related: Here’s Why You Should Try Shadowboxing

You might not think that football is a sport that you can play with just 2 people. In a way, you’re right but you can run some excellent drills and mini games. You’ll get a full-on cardio workout plus you’ll be adding some variation to your workout routine. Variation is how you see gains, not by repeating the same exercises over and over again.

There’s a game I like to play with my buddy called “pass the man”. We each take up positions about 20 yards apart and one person throws the ball to the other. The receiver then must try and get past the guy who threw the ball. Each successful pass gets a point.

After a few points, we added some distance between us and narrowed the boundaries of the playing field. The action got really intense and the thrill of competing against each other pushed us both to the limit. We were both surprised at how hard we pushed it playing flag football.

My workout buddy wasn’t too enthusiastic when I suggested that we swap out a gym day for a round of golf. He just didn’t think that it would give him enough exercise. Golf is a low-impact, low-intensity sport, but it’s ideal for older athletes who want to stay healthy and active.

My gym buddy and I aren’t in our glory golf days just yet, but I convinced him to try a round of golf on a day that we would normally be recovering. Sometimes, I catch him sneaking off to the gym on off days, so he was keen to try something different if it felt like he was getting an extra workout.

Instead of riding carts, we chose to walk the 18-hole course while carrying our clubs. We had a blast, but it was shocking how much walking that entailed. Australian golf magazine Inside Golf did an experiment and found that an average golfer on an 18 hole course, walks 8.5 kilometers on foot. My gym partner and I would have never clocked in that amount of mileage on a treadmill. It would’ve been too boring.

I like to try adventurous things, but my workout partner needs a bit of extra encouragement to break out of the same old routine. He and I were both getting burned out at the gym. So, trying different exercises and sports was an amazing change of pace for the both of us.

We worked out different muscle groups, trained harder and longer, plus we had more fun doing the work. I’ll admit that there’s no substitute for the focused, targeted results you can get from simply lifting weights in the gym, but too much of the same thing stagnates your growth.

If you really want to shake things up a bit, grab your battle buddy and expand your fitness horizons.

READ NEXT: 5 Ways to Make Friends Now That We’re Outside Again