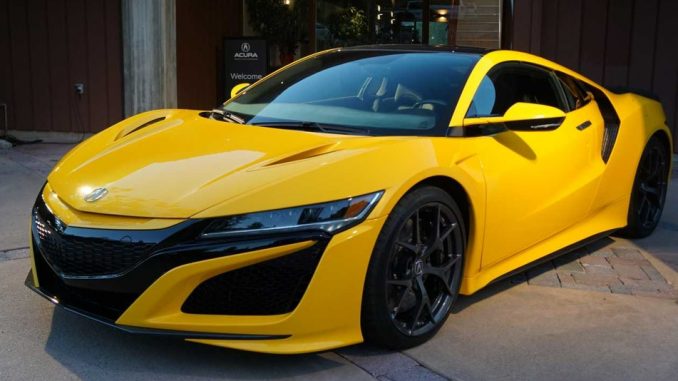 A CLOSER LOOK at the Electrified Acura Supercar

The Acura NSX is one of the most unique and surprisingly approachable supercars on the market. Unfortunately, Acura won’t be producing any more NSX models after 2022.

The silver lining for the NSX is that Acura will make a new Type S variant for 2022 and run a limited slate of only 350 vehicles. That could be great news for auto collectors, and it gives supercar enthusiasts one last chance to get behind the wheel of a brand new NSX.

The NSX is truly a trend-setter in the automotive world. It had the first 9 speed dual clutch transmission and the first vehicle to utilize three electric motors on a hybrid. When the NSX from Acura debuted in 2016, it was a gamechanger. It set the bar for hybrid performance vehicles.

Monterey Car Week kicked off on August 12th and that’s when the automotive world got its first glimpse of the 2022 Acura NSX Type S. The NSX didn’t have center stage at Monterey though. Aston Martin revealed its new Valkyrie Roadster. The Pininfarina Battista electric hyper car emerged in Monterey and so did the shapeshifting Audi concept car called Skysphere.

Of all the new debut supercars at Monterey, the Acura NSX was the most grounded. It’s an actual supercar, not just a concept and it will be coming to market as an instant collectible. It’s not a shapeshifter, but the new NSX is shaping up to be one of Acura’s finest models to date.

In a company press release, Acura assistant VP Emile Korber proudly stated that the “”NSX has played a critical role in reestablishing Acura as a performance brand and the return of Type S. We've seen tremendous enthusiasm in the market and we aren't done yet; there's more to come as Type S becomes the pinnacle expression of performance across the Acura lineup.”

The 2022 NSX Type S will come with an enhanced twin turbo V6 engine and Sport Hybrid SH-AWD. That stands for super handling all-wheel drive. The NSX Type S has a maximum speed of 191 miles per hour. It can travel from zero to 60 MPH in just under 3 seconds.

The 2022 Acura NSX has a redesigned front end with carbon fiber. The carbon fiber add-ons travel all around the vehicle. The side skirts are new and so is the rear spoiler and diffuser. The roof panel is carbon fiber, too. If you’re familiar with the NSX GT3 Evo racing model, then these new features won’t see very novel at all.

Most of the promotional material shows the new NSX in Gotham Gray Matte paint with performance black wheels wrapped in Pirelli P-Zero ultra high performance tires. The front wheels are 19-inch and the rear wheels are 20-inch.

The wheels have a five star design and they’re set on a wider track for enhanced g-force control. The Gotham Gray paint has nono-technology to create a finish that’s truly worthy of a rare supercar. There are also nine other new paint palettes.

Most of the vehicles that you’ll see for the new NSX Type S come with the Lightweight Package. Acura is notorious for bundling features into expensive (but almost necessary) packages and the new NSX keeps up the tradition. The lightweight package has carbon ceramic brakes, carbon fiber engine cover and lots of lightweight carbon fiber upgrades to the interior cockpit.

Related: Review of the 2020 Acura RDX

The NSX utilizes twin electric motors and a third direct motor drive. The direct drive motor is in the rear of the vehicle. It’s the most powerful standalone electric motor in the NSX. Additionally, there are two electric motors that work in tandem. The electric system is powered by a hybrid lithium-ion battery bank.

The 2022 Acura NSX Type S has a 3.5 Liter, twin turbo V6 engine. The powertrain produces 600 horsepower, the highest output of any NSX. The NSX also pushes out 492 pound feet of torque. These are system output specs. So, when you combine the work of the gasoline engine and the electric motors together these are the performance numbers you can expect.

Related: Is Your City or State Ready for Electric Vehicles?

There are four different driving modes including a quiet mode that cloaks the NSX as a tame hybrid vehicle. The other modes are sport, sport+ and track. Fuel economy numbers haven’t been published, but you can expect the new NSX to match the MPG of a sport hybrid depending on how it’s driven.

The sharp cuts and angles along the body of the NSX aren’t just for intimidation. It’s more about air flow. These lines in the bodywork promote air cooling and create aerodynamic enhancements that equate to greater speed and handling on the road or the track. The active damper system has also been re-tuned on the new NSX.

The suspension system is composed of aluminum control arms, double wishbone links in the front and an aluminum multilink system in the rear. The frame of the NSX Type S is composed of various materials that are reinforced with high strength steel tubing.

The interior has been slimmed down to just the essentials. The steering wheel has a flat bottom with a few manual controls. There’s Alcantara and carbon fiber on the paneling, seats, headliner and doors. With bright red leather accents, the NSX takes on an almost juvenile aesthetic.

The center console interface has a narrow stack with more tactile interfaces than touchscreen ones. The NSX only has a 7-inch touchscreen interface. Overall, the layout seems a bit dated when you compare it to the high-tech minimalist cockpits of rival brands. Yet, Acura clearly wants to cement the NSX as a motorsport inspired supercar. Therefore, the driver is required to fully push, toggle, grip and drive this vehicle.

This is a racing inspired, track tested hybrid supercar. The exterior certainly more attractive than the interior, but the cockpit makes up for dated hardware with a spirited driving experience. The 2022 NSX comes with Type S badging and the appeal of being a rare commodity. Only 350 units will be produced.

If you want to see more of the new 2022 NSX Type S, check out this trailer from Acura.

READ NEXT: Is the McLaren Speedtail Faster Than a Fighter Jet?