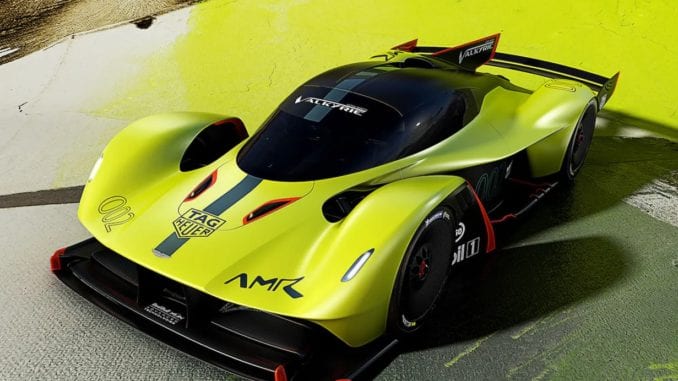 How Fast is the Aston Martin Valkyrie?

The Aston Martin Valkyrie promises to be the fastest street legal vehicle on the planet. That’s because it’s been designed by a Formula One racing team with little inside the cabin except for a steering wheel and a few mounted screens.

The Valkyrie has a V12 hybrid engine and aims to hit zero to 60 MPH in just two and a half seconds.

Introduction to the Valkyrie

In Norse mythology, the Valkyrie are fickle female deities that decide who lives and dies in battle. Well, let’s hope that whoever pilots the Valkyrie from Aston Martin is on their good side. Aston Martin teamed up with Red Bull Racing and Cosworth to design a barely legal hyper car that pushes the boundaries of speed to the next dimension.

The Valkyrie is aptly named because it has almost mythological performance capabilities and an aerodynamic design that belongs in the skies. It’s reminiscent of a bird’s anatomy – a key symbol of the Norse Valkyrie, and this hyper car threatens to break the 300 MPH record.

Only 150 Valkyrie vehicles will go into production, making this a truly limited-edition hyper car. The Valkyrie will cost around $3 million dollars.

So, that means there’s only an elite class of buyer that can afford such an exclusive level of speed. Aston Martin announced at the unveiling of the Valkyrie that all the units have already been pre-ordered.

It's Got Formula One Speed

Cosworth might not be a name that most casual auto enthusiasts know, but when it comes to motorsports, only Mercedes and Ferrari have produced more winning powertrains. Aston Martin teamed up with Cosworth and Chief Technical Officer Adrian Newey from Red Bull Racing to produce the Valkyrie’s 6.5 Liter hybrid V12 engine.

The Aston Valkyrie sends its power to the rear wheels. It’s capable of achieving 1,160 horsepower and 664 pound feet of torque. The Aston Martin Valkyrie can go from zero to 60 MPH in just 2.5 seconds.

As a point of comparison, consider that the 812 GTS Spyder from Ferrari produces 789 horsepower and 530 lb. ft. of torque. That’s one of the fastest V12 cabriolets on the market. The Bugatti Chiron will be one of the only hyper cars to rival the Valkyrie with 1,500 horsepower.

The Valkyrie’s lightweight body, electric motor and V12 power will make for an unprecedented amount of speed. The electric motor acts as a horsepower booster while the naturally aspirated, direct injection engine supplies most of its torque during launch.  That’s a type of kinetic engine recovery system that comes straight from Formula One.

The motorsport technology that went into producing the powertrain is a bit of overkill for city streets and daily commutes, but it’s a road car. Can you believe it? The mid-mounted engine is probably better suited for Formula One tracks but will just barely make street legal status.

It’s too early to see how the Valkyrie handles on city streets, but that will most likely be the grand equalizer in its pursuit of hyper car glory. Interestingly enough, Aston Martin will race two Valkyrie hyper cars at the Le Mans endurance classic in 2021.

Related: How Fast is the Aston Martin DBS Superleggera

Aerodynamics of the Valkyrie

The Valkyrie has one of the most groundbreaking body designs ever created. The body of the Valkyrie is totally made of carbon fiber and there isn’t any steel or aluminum in the body structure itself.

It has an incredible 1:1 power to weight ratio. The Valkyrie also has a very low ground clearance, at least near the fenders, giving it a very flat stance. It’s simply visually stunning.

If you look underneath the Valkyrie, you will see that it’s almost hollow. It has a concave underbody. In this respect, you can say that the hyper car is split in half. There’s a top half that’s rounded and wavy and there’s an underbody that’s vacuous and empty.

The front fascia is almost completely hollow with large passageways for channeling air. The front active wing leads air to cool the front brakes. The profile has a feathered look, like wings. Speaking of wings, the doors open in the gullwing fashion, lifting straight up.

The top of the Valkyrie has a rounded design motif. Again, it does look birdlike with large fenders over the front and rear wheel wells. This feathered motif continues along to the rear of the hyper car, as well.

The cockpit has a large domed top over it that gradually diminishes toward the engine housing. This design element will give a wide range of visibility to the driver, but the side mirrors are noticeably absent. The Valkyrie will use onboard cameras for side and rear views of the vehicle’s exterior.

It won’t be easy for anyone to climb into the Valkyrie. The comfort of the driver and passenger obviously came second to the performance aspects of the overall build. There’s little cushion on the seats and you’ll have trouble finding the door handles.

There’s something about the interior of the Valkyrie that might play tricks on the eye. The two seats are bolted directly into the frame and they’re angled 5 degrees inward. This is so that the front bulkhead stays as narrow as possible and the Valkyrie doesn’t make any compromises in aerodynamics.

The interior of the Valkyrie pays homage to Formula One racing with its flat steering wheel. There are plenty of toggles and analog switches that can be accessed with the driver’s thumbs while driving. There’s a touchscreen display in the center of the dashboard, but otherwise, there’s not much for a passenger to do inside the Valkyrie.

There’s carbon fiber everywhere that you look, but nothing that could possibly compromise this hyper car’s primary objective – speed. Luxurious amenities aren’t available for the Valkyrie. So, this won’t be a casual hyper car like the Bugatti Chiron with its leather seats and custom made, aluminum instrument displays.

Get a Closer Look with Shmee

The Aston Martin is an impressive hyper car, but it’s time in the limelight might be short-lived. Mercedes-Benz AMG and Lewis Hamilton are set to debut their Formula One road car to rival the Valkyrie very soon. This is the inescapable fate of hyper cars. There’s always a faster vehicle coming up in the rear view.

For the time being, the Aston Martin Valkyrie is the one to watch, the one to beat. It will always be an exclusive vehicle with aerodynamics that are more automotive art than driving machine. The Valkyrie will be fast, but there won’t be many occasions to put it to the test. Afterall, that’s three million dollars crossing the finish line.