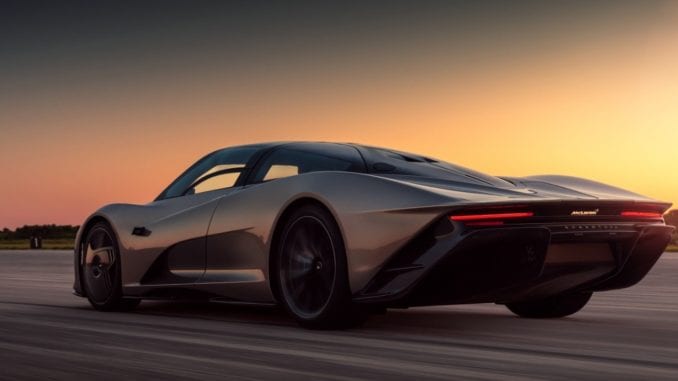 How Fast is the McLaren Speedtail? Well, it’s the fastest McLaren ever built. The Speedtail blends luxury and performance to create a rare, futuristic supercar. It has a space-aged body with an innovative hybrid powertrain.

The McLaren Speedtail is technically a hyper GT (gran turismo) super car, but it’s hard to imagine putting serious mileage on such a work of art. The interior borrows heavily from the McLaren F1, but otherwise, the Speedtail sets its own precedent.

The first McLaren Speedtails started going out to owners in February of this year. Only 106 models were slated for production at a cost of $2,100,000. All models have been purchased and if you happen to be vacationing in Dubai or Saint-Tropez, you might catch a fleeting glimpse of this supercar unicorn.

McLaren CEO, Mike Flewitt proudly noted that the “The Speedtail is a truly extraordinary car that epitomises McLaren’s pioneering spirit and perfectly illustrates our determination to continue to set new benchmarks for supercar and hypercar performance.”

When you build a supercar this remarkable, the comparisons start to get ridiculous. Recently, automotive enthusiasts have wondered if the McLaren Speedtail can beat a fighter jet off the line. The Speedtail borrows heavily from aircraft engineering. So, why not see how it matches up against the real thing.

Check out this dramatic race put on by the boys at Top Gear. If you watch very closely, you’ll clearly see the actual moment that you realize you can’t afford either one of these speed demons.

The Speedtail is really a hybrid. The 4.0 Liter turbo charged V8 engine is paired up with an electric motor. The McLaren Speedtail has the highest battery power of any road car. That’s largely thanks to an innovative cooling technology that allows the battery bank to work harder without overheating.

The acceleration is mind-numbing. If you’re not careful, in just 13 seconds you’ll be at 186 MPH. The McLaren Speedtail tops out at 250 MPH. It hit that mark over 30 times in speed trials.

The McLaren Speedtail performed its maximum speed test runs at the Kennedy Space Center, a fitting venue for such a groundbreaking vehicle. In a company press release, McLaren Automotive CEO, Mike Flewitt commented that “It’s fitting that the Speedtail’s high-speed test programme concluded with multiple maximum-speed runs at a location strongly associated with pushing the boundaries of extreme performance and engineering excellence.”

The McLaren P1 has a battery bank, as well. However, the Speedtail is 4 times as energy efficient.  Its compact, high powered cylindrical cells are arranged in a unique array that delivers a whopping 1.647kWh. Plus, the hybrid system is self-charging so there’s no need for plugging in.

The Speedtail has a center seat design with the driver getting front row real estate. There are two other seats flanking the driver position, like a fighter jet with room for two buddies in the cockpit. The driver gets a symmetrical view of the cockpit and an unimpeded view of the road with very few distractions on the dashboard.

The driver controls everything from his/her position. To the left of the steering wheel are touch sensitive controls for the vehicle and to the right are some infotainment controls. There aren’t any buttons, knobs, or switches.

Related: Just How Fast is the Koenigsegg Gemera?

Two digital screen displays replace traditional side mirrors. Most of the controls are overhead like in an airplane. These are only accessible by the driver. So, you never have to worry about someone reaching over to mess with the AC. There’s a control hub up there milled from aluminum. You open the doors, adjust velocity, open the doors, and start the engine.

LED lights that are incorporated into the glass provide interior illumination and it can be darkened with a touch of a button. The whole glass windscreen envelopes the cabin, traveling back all the way to the rear of the vehicle and up along the doors.

The Speedtail’s interior can be customized to the owner’s specification and taste for opulence. The materials used are carbon fiber, premium leather, and precious metals. You can create a signature carbon fiber pattern, incorporate a special kind of leather that keeps you gripped in the seat, or put platinum badges on the body.

The body style of the McLaren Speedtail would make a science fiction novelist blush. It has an elongated rear and an overall teardrop shape. This isn’t for kicks and giggles either. This shape is taken from the fastest birds and fish in nature. It reduces drag, making air flows over, under and around the Speedtail.

It’s quite long for a road car, extending out to 17 feet. There aren’t many gaps in the paneling. The side mirrors are digital cameras that glide out of the paneling when you start the vehicle, potentially giving the driver a greater field of vision. It has individual jewel LED headlamps much like the ones seen on Acura vehicles.

Most supercars come with a bold rear wing spoiler, but not the McLaren Speedtail. It has curved panels called ailerons that spread out at high speeds like flaps on an aircraft. These ailerons aren’t built on hinges though. It’s part of the carbon fiber body and the tail bends in an almost magical feat of dynamic engineering.

You might notice that the front wheels and rear wheels look different. It’s not for style points. The front wheels have carbon fiber covers that don’t rotate with the 20-inch wheels themselves. They float there to reduce turbulence.

Driving the McLaren Speedtail is a rare treat for the elite auto enthusiast. The driver sits dead center in the car and gets all the focus. It’s like being a racecar driver and a fighter pilot all at the same time.

If you want to see the McLaren Speedtail perform at its best, then engage Velocity mode from the cockpit. The vehicle lowers 1.4 inches and the powertrain dynamics are automatically tweaked for maximum performance.

Related: What’s Up with the Atlanta Street Racing Scene?

What do you think of the McLaren Speedtail? Let us know what you think in the comments and be sure to share this article with your friends.