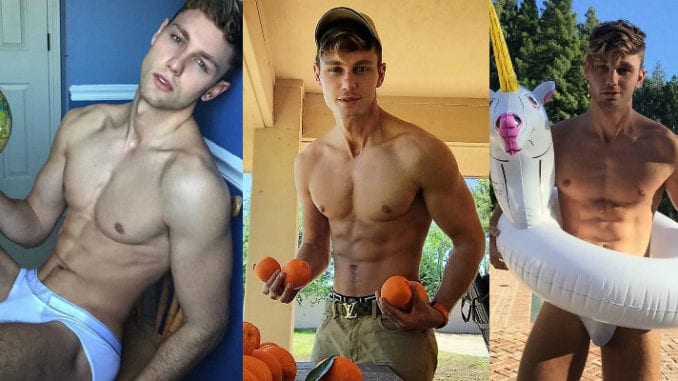 It wasn’t that long ago that male model Charles Laurent Marchand’s  revealing photographs showing his massive assets hit the web. The imagery certainly caught the attention of many people, including ours!

But beyond his deep blue eyes and pretty blond hair, what do you really know about him? Is there more to this man than just his massive largeness?

Wild animal of the Grand Canyon 😂

Given interest in this stud, GPB decided to do some research and present 7 facts about Charles Laurent Marchand you might not know.

After all, behind every pretty face is a human story!

All about inside beauty ! 😂

Mr. Marchand is known for his work with the AIM Model Agency in NYC. A boutique outfit, the company is credited for having an eye for attractive male talent.

Back in 2015, a series of color and black and white photographs that were taken by photographer Michael Del Buono hit the web, which in many ways helped to introduce Marchand to the world.

He strutted down the catwalk with nothing but a robe on, covering his manhood with only his right hand (which didn’t exactly cover it all.) FYI: Costello gained is claim to fame as the finalist on the eight season of Project Runway.

When you take a peek at Mr. Marchand’s Instagram account, you will notice a number of insanely attractive friends. But there is one particular swoonworthy guy that (aside from Charles) that stands out.

His name is Jaye Kaye, a jewelry accessory fashion designer associated with the European outfit, Seven50 Group. What’s their relationship, if any? Are they buddies, brothers? More?

Mr. Marchand has either visited or lived in a number of different cities around the world.

His Instagram page is a virtual collection of postcards from different destination points, including Las Vegas, Puerto Rico, California and South America.

When your inner child comes out 😜

We couldn't help but notice a number of photographs with the model that featured him with different dogs. In case you don’t know, Marchand has a pooch.

Marchand is a Libra; a sign that is associated with harmony and peace. By definition, Libra’s like balance. One way this particular Air sign creates amity in life is by spending time outdoors, especially by water.

The picture above was taken on Chicago's Lake Michigan (home to GPB). Go through his pics – many are taken with the sun at his back and h20 nearby. As we said, for him and other Libra's like him, it's all about harmony and peace.

In December of 2016, a series of photographs of Mr. Marchand “leaked” onto the web. Some have dubbed these the “Scruff” photos. We can’t show the pics here (sorry, our advertisers don’t like that) but we can tell you how to find them.

There’s no question about it – the French born model has extremely MASSIVE assets. We can't show the photos here per blog policy but a little birdie told us they may be available on the OMG Blog via this totally not safe for the workplace link.

But you know what else?

Our sense is, based on the totality of his photographs, coupled with non-scientific analysis, is that Mr. Marchand has a lot more going on than just his hugeness.

Inside, there is a person who is deeply intellectual, highly focused and has a knack for business. Perhaps in the future, we will see more of this side from him in the future?

Work hard, eat sweets harder! 👨‍🍳 Be stronger than your strongest excuse 👊 you can do it! #sober

If you haven’t already seen these pictures, you can easily find them. Just do a simple Internet search and you'll find a host of articles with images.

Just for fun, we’ve put up a poll (see link) that lets you pick your fantasy date with Charles. If you enjoyed this article, please show your support and LIKE us on Facebook!

More: Learn about the hot, hairy BMX biker – Will Grant!

More: Aaron Moody has the biggest monster we've ever seen!