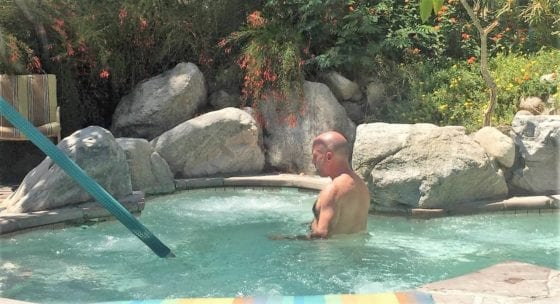 Some people want to ruin it for everyone.

By: Bryon from Minneapolis

“Hey baby – where do you want to go on your honeymoon?”

That was the first question my newly minted husband asked me after we officially tied the knot in Minnesota.

Over the next few weeks, we explored options. Ultimately, we decided to spend our dollars at one of those gay clothing optional resorts in Palm Springs.

Hey, it’s always good to keep it in the family, right?

So you can imagine how horrified we were when an older bear began waddling around in the Jacuzzi and decided to take a dump.

I’m not kidding you.  This is exactly what went down.

We probably should have known something like this could happen when we saw a sign by the resort’s wet area that clearly instructed visitors not to get into the water if they had active diarrhea.  For real – that’s exactly what it read.

“Is that supposed to be a joke?” asked my hubby Steven, as we passed by the sign after checking in. “WTF – why on earth would something like that need to be posted?” he added.

Once settled into our room, we talked about the different things we wanted to do. This was our first trip to Palm Springs and were eager to get in some sightseeing. So over the course of the next few days, we did the things tourists do – like ride the Ariel Tramway (aka: “The Tram”), visited the Living Desert Zoo, and stopped by a few local casinos.

Not bad so far, right?

On our fifth and final day at the resort, we decided to make it a pool day. The night before we were out late at the bars and the both of us were feeling kind of beat. “Let’s just get some sun and enjoy the time we have left,” I suggested.

So we found a quiet area just off the Jacuzzi where we could sunbath nude. Against the backdrop of powder blue skies, a gentle wind blew through the trees. Birds chirped softly from the distance and the aroma of desert wild flowers filled the air.

It was truly beautiful. The best part was that nobody was around – it was just us.

“Maybe we can get into the Jacuzzi in a few minutes?” said my hubby, as he gazed around the wet area through sunglasses. I could tell he was genuinely feeling excited.

Just as we were about to make our move, a heavy set bear that was probably in his early 60’s came out of nowhere. Dressed only in his birthday suit, he looked around a bit and then slowly slipped into the bubbling water.

“Well, we’re going to have to wait the bear out,” whispered Steven in a disappointed voice.

If you have ever been to a gay resort, you probably already know that the Jacuzzi is a popular area for hooking up. And so if you get into the water when someone is hanging there, it can be interpreted as a signal for play. That’s not always the case. Some people do like to socialize. But that’s just not the vibe we were getting. The bear was looking for some action.

As a matter of full disclosure, I want to say that we’re not saints. We’ve done things before. While we may have just got married, we’ve actually been a couple for over 10-years.

So there we were, hanging out on our padded chase lounges and waiting for this guy to get out. We ignored his mating calls, offered in the form of various gestures. You know when someone wants to get it on and in this case, the guy was being obvious.

We ignored his flirting and never signaled back any interest. That didn't go over well because he started to get angry. And our giggling only seemed to irritate him more.

Minutes later, this bear started to act super bizarre – so weird that Steven began to secretly take pictures with his smart-phone.

Well, sometimes he would splash around and frolic. Other times, he would sing a meditative chant. And at one point, he actually hugged a rock that was landscaped into the Jacuzzi area; like he was bonding with nature.

“Is this how he’s dealing with rejection?” I snickered to Steven. We both thought what he was doing was funny.

The bear slowly began to make his way towards the Jacuzzi stairs to exit. But then suddenly, he stopped dead in his tracks and turned his head towards our direction.

“What are you two looking at?” he said with an angry voice. “Are you waiting to get in here?”

Before we could respond, he shut his eyes and got all Zen like. This was followed by a good 60-90 seconds of more chanting. When he opened his eyes again, he looked straight at us again and said, “All yours – have fun!”

Moments later, he left the Jacuzzi and exited the wet area. He was gone – finally!

“It’s now or never babe,” said Steven as he got up from his lounger. Together, we began to tip toe into the warm water. “Wow, that’s hot!” Steven exclaimed.

Then I saw it – a huge, brownish log traveling in fast circles. Behind it were two smaller ones.

“Jesus, is that what I think it is?” said Steven. “Please tell me that guy did not sh*t in this Jacuzzi!”

For a quick second, I thought what we were seeing could possibly be tree bark. There was greenery all around us and so it wouldn’t be a surprise to find something like this. But as I examined the swirling objects more closely, it became apparent what had transpired.

The bear had marked his area.

The attendant at the front desk dispatched someone from housekeeping to the pool. Using a net, he fished out the left-overs from the earlier guest. “What did he look like?” asked the kind gentleman.

We described him with all the detail we could muster and Steven showed him the pictures he had slyly taken.

Later that evening, the manager of the resort explained to us that the offending party was a local guy on a day pass. We didn’t know this but there are some places that allow people to come in for a few hours if they pay a nominal fee.  It turns out our resort was one of them.

It didn’t ruin our honeymoon or anything, even though the Jacuzzi was roped off for the duration of our stay.

Oh, and that sign that was hung up by the wet area? Turns out California law requires these types of notices. The incident involving the guy who pooped in our Jacuzzi was simply a coincidence. Sounds crazy but it’s true.

Everyone has a vacation story I guess. So there’s ours.