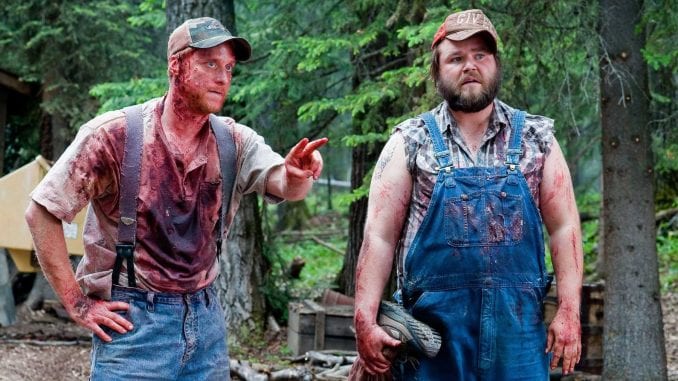 What is it about a cult classic movie that makes it so amazing? Is it a compelling or underwhelming plot? A ridiculous and often obnoxious presentation of that plot? Is it a lack of praise, following, and mainstream attention for the movie? Or is it possibly a mixture of the three? Probably the latter.

Making a cult classic movie is like catching lightning in a bottle. It's magic that can’t quite be defined or accurately planned out. Sometimes, you just stumble upon it. Sometimes, it stumbles upon you. No matter what, a good cult classic film always has a strong and passionate fandom behind it.

People will watch these films 3, 4, 5, 6, 7 times or more. These movies have regular screenings at indie film theaters and often become a spectacle YEARS after they were released.

But what cult classic films should you watch? While there are many hidden gems out there in this world, here’s a list of 10 movies you should check out.

“A newly-engaged couple have a breakdown in an isolated area and must seek shelter at the bizarre residence of Dr. Frank-n-Furter.”

We’ll start off easy with a few films that are on the cusp of no longer being a cult classic. They’re just so good (or bad) that they are becoming nearly mainstream. First, there's The Rocky Horror Picture Show.

While this is possibly the most popular movie on this list, it is also one that has a solid cult following to this day. With theaters hold live performances, audiences yelling out planned responses to scenes, and even a dedicated episode on Glee, this movie-musical has a devoted fandom.

With all the wacky things that go on in this movie, can you blame them?

Next, we have Sharknado aka the Sci-Fi tv channel's big moneymaker. This tv movie series follows the ridiculous set up where a bunch of sharks get swept up in a tornado and then terrorize the world.

This series is somehow deadlier, campier, and less mainstream than the Final Destination series, and that's why many people love it.

“A tribe of cats called the Jellicles must decide yearly which one will ascend to the Heaviside Layer and come back to a new Jellicle life.”

There is NO WAY you haven’t heard of the disaster that was last year’s Cats. This recent movie adaption of the Broadway musical Cats is both fun and horrible at the same time. The movie is becoming a cult classic because of that. Honestly, it’s really THAT bad. The CGI faces are off-putting, the acting is bizarre, and the musical score is outdated.

But all of that makes watching this film a great ride.

“Johnny is a successful bank executive who lives quietly in a San Francisco townhouse with his future wife, Lisa. One day, putting aside any scruple, she seduces Johnny's best friend, Mark. From there, nothing will be the same again.”

Despite what was just said with Cats, The Room is possibly the worst movie ever made. Starring, written by, and directed by Tommy Wiseau, many have wondered how this film was ever made (or financed). There’s both no plot and random moments of intense plot at the same time.

There’s next to no acting talent. There’s several uncomfortably long “adult” scenes. Honestly, this movie has everything and nothing.

But, you have to watch it yourselves to find out what we mean.

“A young punk recruited by a car repossession agency finds himself in pursuit of a Chevrolet Malibu that is wanted for a $20,000 bounty – and has something otherworldly stashed in its trunk.”

Now, let’s move on to the lesser-known cult classic films. For instance, we have the 1984 film Repo Man. While this satire of Reagan-era America was a widespread success, the movie eventually faded away from the public’s mind. Though, Repo Man gained cult classic status after director Alex Cox re-edited the film for television distribution.

The movie’s edits included overdubs to replace profanity. The problem for Cox (and win for its cult followers) is that the overdubs created a surreal and bizarre presentation. Thus, it has maintained a vocal fan base throughout the years.

“After losing his parents, a priest travels to China, where he inherits a mysterious ability that allows him to turn into a dinosaur. At first horrified by this new power, a hooker convinces him to use it to fight crime. And ninjas.”

While newer than many other films on this list, the VelociPastor is the real deal when it comes to cult classics. Every part as ridiculous as the others, this film follows a pastor who is cursed with the ability to turn into a dinosaur. He then decides to use his power for good by killing villains and criminals.

With fantastic editing, goofy storytelling, and commendable acting that merges strange humor with serious flair, this film is every bit as crazy as it sounds.

“Three company workers who hate their jobs decide to rebel against their greedy boss.”

This dark comedy film is so fun that it has inspired several internet memes and parodies from Smosh, Family Guy, and even Ted Cruz’s presidential campaign.

Specifically, one scene in which the three leads destroy a dysfunctional printer after two are laid off from their jobs has become an iconic scene to cinephiles.

“In the near future, a charismatic leader summons the street gangs of New York City in a bid to take it over. When he is killed, The Warriors are falsely blamed and now must fight their way home while every other gang is hunting them down.”

This action thriller film initially was met with negative reviews, but it fought through that and became a cult classic worthy of joining this list. From the dialogue, the clothes, and the music, this movie is surreal, stylish, gritty, and gaudy all at the same time.

The Warriors is testosterone-induced, a love letter to the 1980s and New York City, and highly addictive.

Truly, that description's all you need to know about this film before jumping in. Despite being nominated for an Oscar (in visual effects), this movie received mixed reviews. That said, the fans of the movie have continued to watch and champion it several decades later.

Like the film listed before it, this movie has violence, iconic (and sometimes cringeworthy) dialogue, and loads of high energy fun. Honestly, the Klendathu drop scene alone is worth loving this movie. Watch it and see.

10. Tucker and Dale vs Evil

“Affable hillbillies Tucker and Dale are on vacation at their dilapidated mountain cabin when they are mistaken for murderers by a group of preppy college students.”

Lastly, we have a bit of a scary movie for you to check out. While this isn’t the scariest movie you’ll watch, it certainly is a graphic one. Tucker and Dale vs Evil lives somewhere within the subgenre of comedic horror. Part horror, part romance, and part comedy, this is an epic tale that also has a lot of gore to it.

So, it’s not for the faint of heart. But often, the gore is a direct tie-in for the humor, so it’s a fun ride from start to finish.

There are plenty of cult classics to enjoy. But here’s a list of 10 films to get you started. Which films have you seen and loved? Which ones are you interested in watching? Let us know your thoughts down in the comments below.

About Devin Jackson Randall 546 Articles
Geek by chance, and an artist by birth. Devin is a journalist and blogger who's always glad to share insights and developments on men's issues. Aside from news stories, he often writes about the roles placed upon men by society, and how both affect the relationships around us. Click on the hyperlinked text to follow him on --> Twitter. Email him at --> [email protected]
Website Twitter