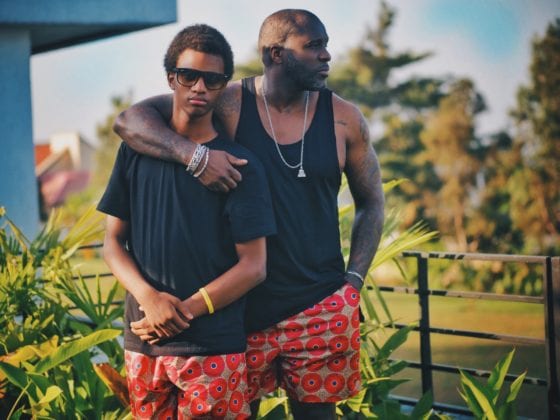 Is your child being harassed or bullied? As a father, are you worried that your kid just isn’t tough enough?

It can be a testing moment to find out that your son or daughter is the victim of bullying. For some men, the natural response is to try and toughen up your kid. You probably just want to protect them but in actuality, you’re placing the blame for bullying squarely on their shoulders. In a child’s mind, they might perceive your response as “you’re getting bullied because you’re not tough enough”.

I heard that exact same thing from my father when I was growing up.

Here’s a bit of a personal story about bullying.

When I was about six or seven years old, I was the victim of bullying in my elementary school. A group of boys who were about 12 years old would regularly harass my friends and I. They’d throw rocks at me, push me down this huge hill at our school, and call me all sorts of names.

When I told my Dad about it, he immediately started teaching me how to punch and kick and defend myself. He never once contacted the school to seek a peaceful remediation of the situation. He didn’t give me a hug and listen to how the whole experience made me feel. He wanted to make me tough.

On the one hand, I was happy to learn self-defense from my father. We rarely spent any time together. However, my six-year-old mind mistook my father’s training for protection as a punishment for my weakness. I didn’t want to be weak because I thought my father would disapprove.

So, the next time that those older kids bullied me, I rushed at them like a crazy person and started fighting them. I was one kid against three. I kicked them and punched them. Honestly, when I think back to the look on their faces, it’s kind of hilarious. It made the bullying stop right away, but it also created a harmful pattern in my life.

From that point on, whenever someone harassed me or my friends, I saw it as my personal duty to fight them physically. As you can imagine, I got into a lot of fights, lots of suspensions and trips to detention. I thought that whenever I was bullied, it was a result of showing weakness to others. I always chose fighting as the appropriate response. Yet, physical violence isn’t the only way to confront bullying.

It’s important to properly identify bullying and some of its causes. Bullying can take many different forms, but it’s mostly unwanted aggressive behavior. This can take the form of physical aggression or hate speech. It can be in real life or online.

Usually there is an imbalance of power involved. This doesn’t always mean that big kids are picking on little kids. That’s just the stereotypical image some parents have in their minds. You’d be surprised to know that some bullies are smaller than your child and they might even be a different gender. Most often, the power is related to social standing.

According to 2019 statistical data from the National Center for Education Statistics and Bureau of Justice about 20% of students ages 12-18 experienced bullying nationwide. Also, 19% of students in grades 9–12 report being bullied on school property in the 12 months prior to the survey. Less than half of students between the ages of 12-18 notified an adult at school about bullying.

Related: Bullying is a Major Cause for LGBTQ Teen Suicides, Says Study

Dads Should Deal with Perceptions about Bullying to Help Their Children

My father never told anyone at school about bullying and he didn’t encourage me to do so either. Instead, he tried to toughen me up and he taught me how to fight. It led me to a false belief that the only way to confront bullying was to punch my way out of it. I punched my way into more problems than I ever got out of.

Now that I’m a father, I’m interested in learning other ways to handle bullying. One of the best things that a parent can do is look closely at a child’s perceptions about bullying. You don’t have to be a child psychologist, but you should ask your child questions about how the experience made them feel.

These facts tell a different story about bullying than simple physical aggression or big kid versus little kid. At least half the students in this study believed that their bully was more powerful in their socio-political environment.

A 2020 Duke University study found that discrimination and bullying might not be about keeping people out of groups, but it’s all about people’s desire to be included in certain groups. In other words, I hate what you hate so let’s stick together.

The research team from Trinity College of Arts & Sciences looked at political partisanship and the huge divisions that can stem from “us against them” rhetoric and behavior. The researchers targeted a characteristic that they termed “groupiness”.

They tested 141 individuals who had been divided into various groups. Each person was asked to allocate money to themselves and another person, either in their group or outside of their group. The other person either shared their viewpoint or didn’t.

The study revealed that being more attached to the group itself made participants more biased against people outside their groups, regardless of the context. Another finding from the study was that the bias was not strongly correlated to the strength of their beliefs or preferences. So, the more a person wanted to identify with a certain group, the more they chose to discriminate on others who didn’t identify with that group.

Another study on bullying might be helpful to fathers, as well. Researchers from the University of California looked at the motivations behind teen bullying. They found that teens who bully or harass others aren’t doing so because they have psychological problems or unhealthy home environments. They aren’t bullying strangers or outsiders either. The study revealed that most bullies are targeting people in their own social groups as a way to gain favor.

“To the extent that this is true, we should expect them to target not vulnerable wallflowers, but their own friends, and friends-of-friends, who are more likely to be their rivals for higher rungs on the social ladder,” said Robert Faris, a UC Davis researcher on bullying.

Alternatives to Confronting Bullying with Violence

Here’s what you should takeaway from these facts and figures about bullying.

(*) Your child isn’t always the victim of physical violence.

(*) Bullying can take many different forms including online hate speech and social isolation.

(*) Your child most likely perceives that their bully is more socially influential than them.

(*) Most cases of bullying come from individuals within your child’s social circle.

(*) Some children and teens never report instances of bullying to responsible adults.

Once you understand these factors, then you can see how confronting bullies strictly from a physical standpoint is not sufficient. It can also cause harmful patterns that might damage your child or others in the future.

However, physical confrontations are unpredictable. It isn’t like the movies where your child boldly walks into a circle of teens, punches his bully in the nose and becomes the hero of the day. That’s what my dad wanted to happen for me and that’s probably what a lot of fathers want for their children.

The only problem is that we don’t live in cinema scenes and that is an unrealistic scenario. You should never encourage your child to engage in physical altercations, especially since so many physical altercations involving young people can lead to serious injury or even death. Better help for young teens who struggle with bullying might come in the form of peer counselling or targeted interventions within social groups.

Bullying is a serious problem, and it shouldn’t be handled alone. Seek help if you feel like you’re in over your head as a parent. Check out the Stop Bullying website to find additional resources and encourage your children and teens to report bullying to an adult.

Read Next: 9 Tips for Taking a Break from Social Media