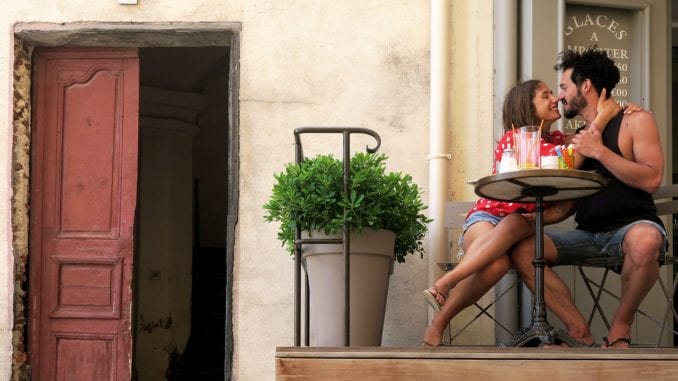 You really want to date your friend’s ex-partner

I need some guidance. Over the last couple of weeks, I've been spending time with a close friend's ex-girlfriend, platonically, after we ran into each other at a bar. It seems like we have a real connection. I can't stop thinking about her. And I think she would like to take it to the next level, too.

The problem is, my friend had a strong relationship with this person, and I think he's still kind of in love with her. So, what are my options? Can I get away with dating my friend's ex? Is this going to ruin our relationship?

This is a tricky situation because dating a close friend's ex is thought to be a major taboo. In fact, “don't date your friend's ex” ranks right up there with “don't break up over email.” There is a reason for this – which is that most folks never really get over significant romantic relationships. Oh, they may say they are over it – but usually that's just a cover for the lingering pain that's going on inside.

I’m not saying a person can never be happy again after breaking up with someone. Of course you can. But it's largely a matter of compartmentalizing.

You get a new and even more amazing girlfriend, or hang out with your friends more, or get into working out and Netflix. You get a new life so you aren’t spending all your time sitting around and crying about what was.

Sure, people will talk about their old relationships and say that they're “over it” or that it “wasn't meant to be,” or pepper you with other related nonsense phrases, but what they mean is they're not thinking about it right now. All of those old wounds stick around, just waiting to be re-opened.

Here is the truth. You will always feel weird when you see your ex, at least a little bit. And, if you date your buddy’s ex, you are telling your friend that your romantic feelings are more important than his happiness.

Because he’s going to see you holding hands with his ex, and remember how good that felt, and if you think they won't envision the two of you having sex together, you are fooling yourself. Of course, that's going to hurt. Sure, it’s a selfish thing but it’s also very human.

Because here is what you are essentially saying: “I don’t care about your raw emotions, I've got to get laid.”

Let’s be honest. Even starting a discussion about this — even coming to your friend and bringing up the subject — will not go over well.

Does this mean it’s never, ever OK to date a friend's ex? Well, actually, no. It means that it's a terrible idea, but that's not the same as “never do it.”

Romantic chemistry between two people – at least on the love front – is extremely rare. It's possible that you've got something special on your hands.

Maybe this is your future wife, or long-term lover, or whatever it is that you're looking for. Should this be the case, you'd be missing out on years of potential passion if you passed up on this person for the sake of sparing your buddy’s feelings. Like I said, this is a difficult situation. You've got a hell of a decision to make.

As such, you should approach this like any other important life decision, which is to say that you should get as much information as possible.

First, be honest with yourself. Is this woman really special to you? Is there actually an uncommon reaction between you — some something magical that is worth alienating your friend for?

Or is she just a super-hot girl who also finds you attractive? Does the connection feel more physical than anything else?

Reflect on these questions with as much skepticism about yourself as you can muster. If you feel fluttery every time you talk to an attractive lady, keep that in mind. If you have recently broken up and just want to feel a connection with someone again, factor that into the equation.

Consider the fact that some of your excitement may be coming from the taboo nature of this potential relationship, because, like everyone else, you want what's off-limits.

If we were playing blackjack, I'd lay odds that your crush on this girl is just like any other crush. It's pleasant illusion, which, if pursued, might reveal a wonderful relationship, or might not. Odds are, that's what this is, in which case you should probably just sigh, move on, and hit up your online dating site of choice, where you can find lots of other girls to crush on.

I learned about this the hard way, in a similar situation. Michael, one of my friend’s (from many years ago) was always kind of bummed out, until he met Rita; a laid back and attractive girl who brought him out of his shell.

They had a fantastic relationship — they were one of those couples that just radiated warm, gooey, nauseating passion — and I was super jealous of it.

Also, obviously, Rita was a ridiculously attractive lady: one of those people you can’t take your eyes off. There was only one weird thing about her, which is that I would occasionally catch her looking at me a little – in the way that expresses “I like you.”. I suspected that she had a low-key crush on me.

About a year after Rita dumped Michael abruptly, leaving him completely devastated, I discovered that I was correct. We (meaning Rita and I) ran into each other at an event.

Flirting with each other was easy, taking each other's clothes off wasn’t hard – it felt like magic.  That last for about three weeks and then it dawned on me that she was kind of boring, or at least that we bored each other.

In the end, I got a few dates and some sexy time, in exchange for an irreparably ruined friendship. You see Michael found out, and he never forgave me.

Now, if you are totally sure this is not you and that what you are dealing with his real love, then you need to be honest with your buddy and let him know what’s up.

Be transparent about your intentions and ask if there is anyway to make the process easier for him. Chances are, the conversation isn’t going to feel comfortable. Because again, you are prioritizing the possibility (or illusion) of something happening with his ex vs. the concrete friendship you have with your buddy.

In the final analysis, dating a friend's ex is not a good idea. But I am thinking you already know this? But sometimes, we do what we need to do for the chance at love.

Need some dating help, too? Email our guru at [email protected]