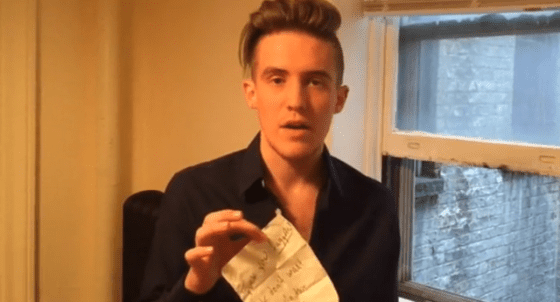 An Albany, New York bartender is telling the story of being left an extremely homophobic note on his car window shield. The incident has left him “anxious and heartbroken”.

“F**k you faggots! We don’t want faggots in this country” and was signed “Trump Nation”.

In the past, he has always thought his neighborhood was safe to be out.

According to Kyle, it's “a progressive and accepting and pretty diverse place to live in”.

“For this to happen here, almost right outside my apartment, left me in shock”, he said.

“If it’s happening here I think it must be happening everywhere”, Arnold told The Times Union.

“It also left me with a heavy heart because I realize the LGBTQ community must face the reality of verbal and physical harassment”, he added.

Kyle strongly feels there is a connection between the election of Donald J. Trump and the rise in hate related speak: “I think about the rhetoric that Donald Trump has spewed across this country and I think about how he’s talked about women, Muslims, Hispanic people and people of color.”

The incident that Kyle experienced occurred in conjunction with a number of other homophobic incidents that coincide with Mr. Trump’s election.

The Southern Poverty Law Center has identified reports of over 700 incidents of harassment Mr. Trump scored a victory in the electoral college.

“In Sarasota, Florida, a 75-year-old gay man was ripped from his car and beaten by an assailant who told him, “You know my new president says we can kill all you faggots now.”

Harassment of LGBT individuals has been reported across the country, making up 11% of all reported incidents.

In North Canton, Ohio, a couple reported “DYKE” was scratched into the driver’s door and hood of their car within hours of the election, the first anti-LGBT harassment they’ve experienced in the four years they’ve lived in the neighborhood.

Pride flags in Rochester, New York, were set on fire while still attached to people’s homes.

A common refrain in anti-LGBT harassment is the threat of rescinding the constitutional protections of same-sex marriage. In Brighton, Iowa, a couple got this note under their windshield: “So father homo, how does it feel to have Trump as your president? At least he’s got a set of balls.

They’ll put marriage back where God wants it and take your’s away. America’s gonna take care of your faggity ass.”

In North Carolina, a couple received a similar note: “Can’t wait until your ‘marriage’ is overturned by a real president. Gay families = burn in hell. #Trump2016.”