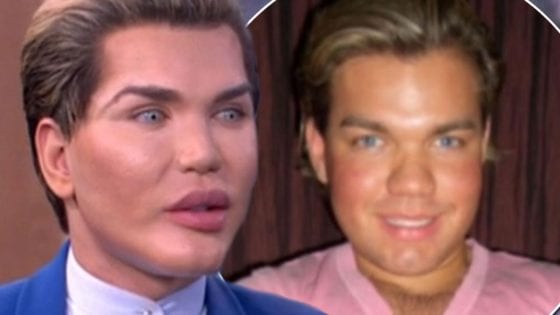 Yes, the picture you see is absolutely real. His name is Rodrigo Alves, otherwise known as the “Human Ken Doll”.

According to recent interviews, he's spent nearly half a million dollars on various cosmetic procedures and surgeries with the ongoing goal of altering his appearance.

If you can believe it, 8 were nose jobs.

He's only 33-years old. Some say he looks similar to the blue-eyed boyfriend of Barbie named Ken. Although to hear Mr. Alves tell it, that was never really his goal.

The expense of the surgeries has started to take their toll. Not only has he doled out half a million bucks for procedures, the surgical alterations in his appearance have stymied his ability to breath.

“July of last year, I had my nose reconstructed with a piece of cartilage from my ribs,” said Alves. “Now I can’t breathe. So I have to do another surgery to repair my breathing.”

“It was never my intention to look like the Ken doll”

As part of the interview, he also asserted that “No one can get addicted to plastic surgery,” he says. “There’s no such thing.”

Actually, some mental health professionals would disagree. We consulted an expert to ask if addiction to cosmetic procedures is possible.

According to Dr. Greg Harms, a psychotherapist who specializes in male body image issues, “Some people absolutely can become addicted to cosmetic surgeries. In fact, that is a common feature of people who have Body Dysmorphia (aka Body Dysmorphic Disorder or BDD). The dependency upon surgery to ‘fix’ distortions can be overwhelming”

When a person has BDD, they have a distorted view of their physical appearance. The Anxiety and Depression Association of America lists out a number of different symptoms.

“They may even undergo unnecessary plastic surgeries to correct perceived imperfections, never finding satisfaction with the results,” states the ADAA website.

When asked by the hosts of the show why he continues to have surgeries and the potential harms involved, he shares. “Plastic surgery is not dangerous.”