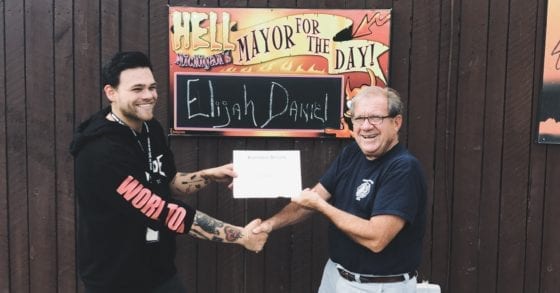 How did he become a mayor of a town called Hell? By taking advantage of Hell's “Mayor for a Day” attraction. Anyone, and I mean anyone, could have donated a fee of $100 and could have become mayor of the town of Hell for one day. 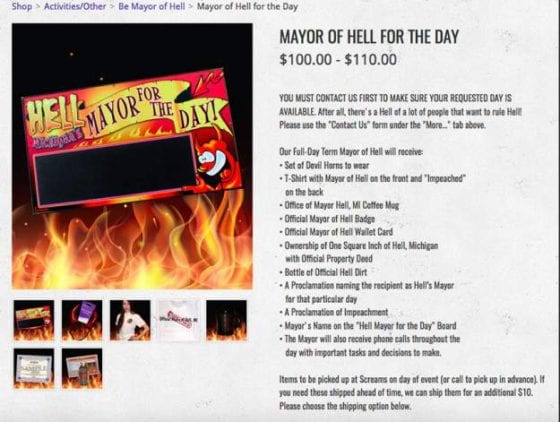 As of today, August 30th, 2017 I am the legal mayor of Hell, Michigan. This is real. I am the mayor of Hell. pic.twitter.com/J7fuaLnFKV

But, Elijah Daniel wasn’t satisfied with just being the mayor of Hell for a day. He wanted to do something with his newfound power. And what he decided to do was to ban all straight people from entering.

During his time as Mayor, Daniel passed an order that banned any new heterosexual people from entering Hell.

In the text of the order he explained the reasoning for this:

“Growing up, I was always told that homosexuals would go to Hell, now the heterosexuals are trying to take this from us too.”

That said, Mayor Daniel was not without compassion for his fellow Hellions and offered ways for his heterosexual brethren to join him in the light of Hell. (And he coincidentally did it in very Trump-like rhetoric).

“We can no longer in good conscience allow straights to enter. However, will not deport heterosexuals out of our town. Any heterosexuals currently residing in Hell will instead be charged an $84,000 reproductive precautionary deposit, which will be returned after one year abstinence from any heterosexual activities.”

In addition, Mayor Daniel even offered to give more chances to the heterosexuals of Hell. He was willing to provide a compromise where citizens could take “straight cure” therapy to get rid of their problem and eventually proclaim their homosexuality. 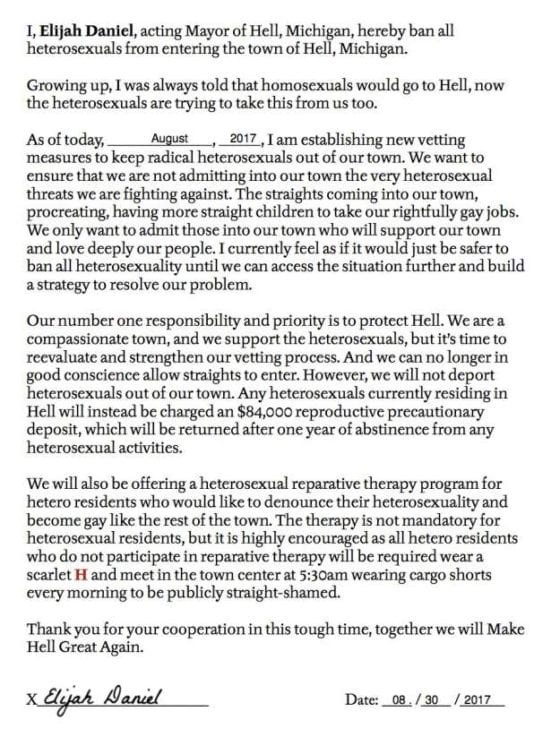 But alas, the great Mayor Daniel’s time did not last and his order didn’t either.

Although I enjoyed my time as mayor, I've been informed that I've been impeached as mayor of Hell. This will not effect my presidential run.

Oh well. It was a great joke while it lasted.