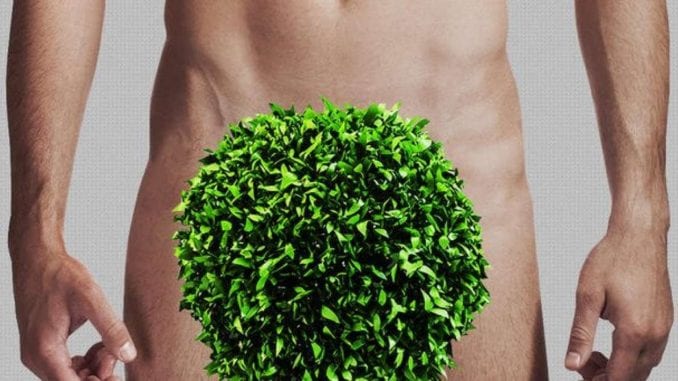 How much do you know about your pubic hair?

Scientists aren't completely sure why men have pubic hair, but it probably serves a purpose that goes beyond keeping our genitals warm.

As part of evolution, perhaps humans got their pubic hair from primates; maybe it’s an indication of sexual maturity, signaling readiness to get busy.

Regardless, experts agree that pubes do a lot more than frame our junk. Here’s what several lines of research have to say about this hairy topic.

Monkeys have pubic hair, too. Even though the great apes’ bodies are entirely covered in coarse hair, their pubic hair is much different, appearing much—finer and shorter, by comparison.

We share other pubic-related things with the apes, although you may not think it’s such a good thing. That’s because there’s evidence that humans inherited genital lice from the gorilla louse.

When you look at the big picture, these observations may suggest pubic hair serves a special purpose in both humans and apes. The exact reason(s), however, remains elusive.

Some researchers think that in humans and apes, pubic hair exists as a kind of signal that a man is sexually mature and can begin to mate. Think of it as nature's version of a neon sign flashing the words, “I'm ready baby!”

In some ways, this kind of makes sense. Pubic hair does act as a barometer of what our hormones are up to, as doctors explore the underlying hormonal issues about why some pubes go grey earlier in life.

There are some experts who believe that pubic hair serves to trap unpleasant genital smells while release stimulating pheromones.

“The hair traps the smell,” Michael Cackovic, an ObGyn at Ohio State University told SELF. “What you can smell is bacteria mixing with the sweat and oil.”

Bear in mind there is other research to suggest that a man’s body odor also serves to attract mates and even relieve stress. Does pubic hair help in this process? Who knows.

Maybe you think your pubes don't really block unpleasant smells. That’s cool. But there is some research to suggest that getting rid of them (entirely) may not be such a good idea.

According to a recent study, the removal of pubic hair can increase risks for herpes, syphilis, and HPV.

Investigators discovered that removing your pubes even once during your lifetime may double the risk of contracting at least one STD. High-frequency groomers (meaning 11 or more times per year) quadrupled their risk.

Does this mean the pubes serve as some type of protector against STI's? Perhaps. But it could also mean that guys who regularly groom their pubes are more sexually active and therefore have more sexual partners.

There's really no way to know with absolute certainty.

5. Removing it can cause injury

Not long ago, a study was released that revealed around 76% of people injured themselves when attempting to trim, shape, or remove their pubic hair. In severe cases, some folks have even required emergency medical attention.

This isn’t to say you shouldn’t try to groom around your junk. But it is to suggest that it needs to be done with caution.

After all, the hair and skin around your genitals are super sensitive.

Maybe this is why some guys have decided to swear off trimming their pubes entirely?