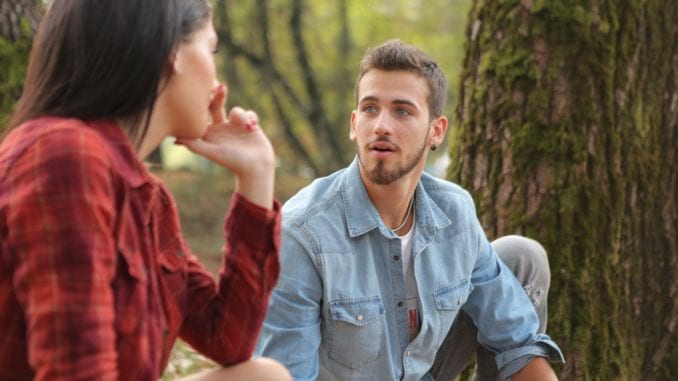 Have you ever said “Hi!” to your crush, only to draw a complete blank afterwards? Of course, after it’s all over you can probably think of a million things you could have said. It’s so frustrating, but with a few subtle tweaks you can become a small talk pro.

There’s an adage that says 50% of communication is non-verbal. That’s partly true, and small talk is more than just the words, but it goes deeper than that. It involves your body language and the way that you speak. Focusing too much on the words themselves can actually frustrate the process even more.

One of the key tricks to making small talk is just being present. Afterall, the whole purpose of talking to your crush is your desire to be around them, to be in their presence. It could be the easiest or the hardest thing to do. That all depends on your perspective.

It’s not always about what you’re saying in a conversation. For the most part, you just want to project your presence. Before you begin a conversation with your crush, be sure to place yourself in a calm, confident state of mind.

How do you do that?

You can do this by telling yourself something positive that you love about yourself.

I’m really good at basketball. I’m a baller on the court and I’m always scoring goals.

This is my favorite jacket. I know that I look good in this outfit.

I’m having a great today. Everything is going my way.

These little affirmations translate to a relaxed, confident vibe that other people pick up on. You don’t want to start a conversation with your crush and project an air of timidity or lack of assertiveness.

Your stomach can be full of butterflies, but on the outside, you should look comfortable in your own skin.

Related: Should You Wear Cologne to Attract Women?

Stand upright when you’re speaking to your crush or lean forward casually. Avoid putting your hands in your pockets and bunching up your shoulders.

People sometimes mimic the behavior of the person that their talking to and you don’t want your crush to start clamming up just like you are.

Don’t worry about the words so much. Concentrate on your presence. A calm and assertive presence make the words come out much easier and it even eases the awkwardness of the inevitable moments of silence that happen in any conversation.

Small Talk: Links in a Chain

Now, let’s focus on the words for a bit. One way to look at small talk with your crush is by imagining a long chain. You create the chain with every verbal exchange. Essentially, each interaction adds a link in the chain.

The longer and stronger your chain becomes, the better chances you have of creating a favorable outcome, whether that be a date, a phone number, or even a romantic encounter. You’re in luck though. Most people like to talk about themselves.

In fact, according to a Harvard University Social Cognitive and Affective Neuroscience Lab study published in 2013, up to 40% of human conversation is people talking about themselves.

That study also determined that the reason for this is that self-disclosure feels really good.

That works in your favor when you use the chain link method. If you can get your crush to start talking about themselves, then you have a strong chance of promoting a good connection between you. When you ask him/her questions about themselves, you’re facilitating the release of feel good chemicals in their brains.

How do you do that? I'm including a video below on small talk – with information that follows.

You’ve got to start with a strong first link. I’m not talking about “Hi, what’s your name?” Let’s go beyond that. Ask your crush a question about something that is relevant to the moment. If that question has a “yes” or “no” answer, then think about a different question.

Open-ended questions work best to form a chain, but you can also make an interesting observation. For example, you notice that your crush is carrying a book. You could say something like “Is that book any good? I was just in the store the other day and almost bought it myself. It’s funny that I’m seeing it again.”

That’s a good chain starter. Now, she might reply that she hasn’t started the book yet or tell you that it’s good or difficult to get through.

Now, you need to add another link in the chain. You could reveal that you like that genre of books and ask what types of books she normally reads.

There might be moments of pause or silence, but there’s no need to get uncomfortable. Just ask another question and try to maintain a calm, confident demeanor.

“I just read The Stand by Stephen King. It was really hard for me to get through. Have you read any Stephen King novels?”

The goal of the chain method is to build a comfort level with your crush. You want him/her to think that it’s so easy to talk to you, even though you might be putting a considerable amount of effort into keeping the links going.

One thing that guys tend to do when they’re nervous about talking to their crush is rush to get out of the conversation. You start with a simple hello and after a couple of minutes you’re asking her for her number or you’re just trying to find the exit.

You ask loaded questions right off the bat like “Do you have a boyfriend?” or “Can I call you sometime?”.

If you’re projecting your presence and putting links in the conversation chain, then you don’t need to rush the close. Don’t forget – the whole purpose of this conversation is to spend time with your crush. So, why are you rushing off as soon as you’ve got their attention?

There’s another way to look at this. Imagine for a moment that you’re a quarterback in a football game. You’ve come out of the huddle. You’ve got a play in mind. You’ve said hut hut hike and the conversation begins.

Now, the defense is blitzing you. Your crush is getting bored. Her friends are trying to pull her away. Everything is happening so fast, but you want to score a touchdown. So, you need to find an eligible receiver downfield.

What you need to do is stay in the pocket. Now, you might have heard this term if you’re familiar with the game of football. Basically, the longer a quarterback can hold the ball and stay in the pocket, staying behind his protective line, the better chances he has of finding an open receiver and making a good pass.

Small talk is just like this. You want to stay composed and stay in the pocket for as long as it takes. When you rush to get out of the conversation, you risk fumbling the ball, so to speak. You need time to score. So, you need to keep the encounter going for as long as possible.

How do you do that?

Keep projecting your presence. Keep putting links in the conversation chain. Stay in the pocket and you will likely score. Separate yourself from all the other lame dudes who have tried to make a pass by displaying your dominance to hold this space and time with your crush.

Here’s a real example from my dating files. There was a time when I started talking to this girl that I liked. She was a perfect stranger, but I just started a conversation with her in the mall. We talked near the railing for a few minutes.

Then, the conversation turned to the subject of computers.

She was shopping for a new computer and I admitted that I didn’t know much about computers. So, she invited me to come along with her to the computer store. Maybe I’d learn something. (Yeah, she was sarcastic and witty.)

We browsed together in the tech store until she found the computer she needed. The store clerk even thought we were a couple. We both laughed about it. After we shopped for computers, I told her that I was looking for a new jacket.

She offered to help me find one. So, we shopped together until I found a new jacket, talking all the while. We worked up an appetite walking around the mall and headed to the food court. We ate cheap food and laughed about it.

Then, I offered to buy her a more respectable meal some other time. We both joked that this was kind of like a first date already. Then, I walked her out to the parking lot, and almost as an afterthought, I asked for her number.

Related: Should Men Pay for the First Date?

We exchanged numbers and went out again the next day. We dated for months, but she went away for college. We’re still friends though. Come to think of it, I really miss her.

There’s nothing more frustrating than blowing an encounter with your crush and agonizing over it later. When you get nervous, you lose focus and forget everything that you wanted to say. It happens all the time to guys, but it’s not that hard to remedy.

Remember to focus more on your presence and boost your confidence before you say a single word. Don’t slouch or fidget uncomfortably or your crush might start to get uncomfortable, too.

You want to show them that you can hold this space and time with them, and it feels great no matter what you say.

Lastly, you need to remember the football quarterback. When he stays in the pocket, he has more time to find the right receiver. He can make the right pass to score a goal by staying calm, patient, and in the zone.

Can you think of any tips or hacks for small talk that we might have missed? If you are looking for more small talk tips, consider the book Small Talk: How to Start a Conversation, Truly Connect with Others and Make a Killer First Impression by Weston (See Amazon).

We’d love to hear you keep the conversation going in the comments or by sharing this article with your friends.