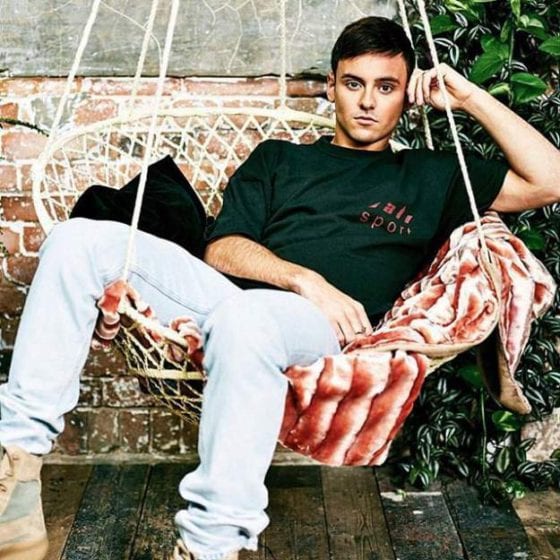 But looking at the pictures, there’s no reason for him to be ashamed.

Word on the street is Olympic swimmer Tom Daley isn’t happy about a photo-leak that recently occurred.

As revealed in the British tabloid, The Sun, the 23-year old athlete is apparently anguished over the situation.

According to the paper’s reporting, the selfies were snapped back in 2016 at a time when Mr. Daley was modeling the pics for his significant other in a “secret relationship.”

“The pictures are old. From 2016, way before Tom and Lance were married.”

“They are from a time where they split for a few months, which they have both talked about previously, but they reunited.”

Daley, who fully acknowledges the flings occurred via online sessions with other guys during the couple’s break, says nothing like this will ever happen again.

“This will absolutely never happen again now that we’re getting married.

“Lance and I had time apart then came back together, realizing we’re meant for each other. We’re soulmates.”

Apparently, Mr. Daley’s legal team wants the photographs in question taken down. The problem is that once imagery gets out online, they can be nearly impossible to remove.

This would not be the first-time celebrity photographs “leaked”.

Last year, MV conducted an interview with an industry expert about how these types of incidents happen and the impact (both positive and negative) they can have on a person’s career.

We examined the photographs, which can easily be found online at sites like Cocktails and Cocktalk and the OMG Blog. We can honestly say we’re not sure what big deal is.

One of the pictures allegedly shows Mr. Daley with his exposed rear end in the air. His entire face is hidden from view. The other photo shows him lying on his side in the bed, looking at the camera.

What’s troubling is that Mr. Daley (according to the Sun) wants the imagery scrubbed from the Internet. If the pictures are of him, they aren’t anything to be ashamed of.

But let’s imagine for a moment they were. For example, let’s assume the imagery showed him doing something more involved. Use your imagination and you get the point.

They were taken at a time when he was not yet married to Dustin Lance Black – during a period when the two had split.

All of us are human and all of us do things we wish we could later change. But in the final analysis, Daley’s photos (at least the ones that are currently out there) don’t seem like that big of a deal.

Perhaps it is best for the young athlete to embrace their existence?