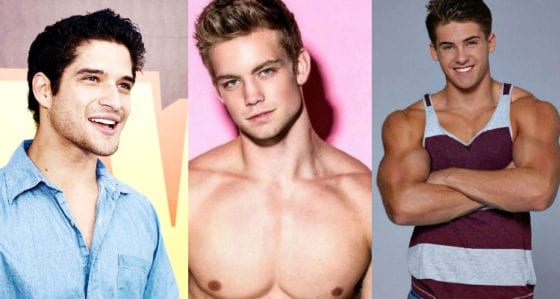 It seems that with each passing week, another male celebrity experiences a “leak” of his NSFW pictures or videos. Recent examples include well known personalities like Justin Bieber and Orlando Bloom.

Once the images hit the web, it’s always mad rush to see the goods. At first glance, these “unauthorized disclosures” may seem random. What’s more, it’s not uncommon for the celeb to claim they have no idea how they got out.

When such things happen, there’s a tendency to feel bad for the star. After all, who really wants their peen pics to be seen by the entire world?

The answer to that question might surprise you. That’s because when you pull back the curtain and look beyond the salacious headlines, you’ll often find a well-oiled PR machine driving the story.

MVspoke to an industry expert who helps to create buzz around various male entertainers. What follows are the top 7 reasons for NSFW leaks you might not know.

1. Timed before debut of show or movie

Have you ever noticed that just before the launch of a new television series or movie, a male celeb’s pics somehow “leak” onto the Internet? Usually cast as “unauthorized”, the spreads quickly throughout the blogosphere.

And in some cases, such as the case of Liam Hemsworth, the photos go viral (easy to find on Google)

According to the source we spoke with on the condition of anonymity, such leaks are anything but unauthorized.

“Look back at the launch of Logo’s launch of Meeting Prince Charming. It wasn’t an accident some of those unsafe for work pics and vids came out. They accomplished exactly what they needed to – create a buzz!” tattles our source.

In truth, gossip about Prince Charming (Robert Sepulveda) did start to heat up well in advance of the show’s premiere. Rather intentional or not, nobody can argue the pics or his backstory didn’t generate headlines.

Sometimes, extremely graphic videos are released to the public to help an person’s stalling career. This point is particularly true for television reality personalities who don’t want to fade from public memory.

“Hot guys on reality shows are a dime a dozen. When they leave the program or the series ends, so does their 15-minutes of fame,” shared our source.

A possible example of this can be found in the case of Dustin McNeer, a contestant who was on American’s Top Next Model. After leaving the show, several purported NSFW pictures (see link) came out of him of the adult nature. And then came word of the super raunchy video leak.

If you’ve noticed, NSFW photo releases happen in groupings. An example of this can be found in a series of Teen Wolf actors who over the period of a month (give or take) each saw electronic imagery “leak” everywhere.

We consulted our source on this phenomenon and were told the following.

“If an actor’s pics start making the rounds and the guy starts trending, like on Twitter, PR reps handing other personalities start to notice. It's not a coincidence when you see these happening in rapid succession. Nobody wants to be left out.”

This point makes sense. Consider that days after Teen Wolf’s Tyler Posey’s NSFW video came out, Cody Christian from the show experienced a snapchat release. But just as quickly as video came out, it went away.

Some people in the public eye know they have large LGBT followings. Actors and athletes come to mind. We wondered if there was a connection between the leak of private imagery and gay audiences.

Our source strongly believes there is an undeniable link. Here’s what he told us.

“Within the entertainment industry, it’s a well-known fact that if you can get the gay community, particularly gay men, to start noticing you, they’ll hype you up. Over time, that spills over into mainstream sources of entertainment,” he tattles. “And if the person in question happens to be gay – even more so!” he adds.

Potential examples of this include Olympic Skier Gus Kenworthy and Olympic Diver, Mr. Chris Mears. Both men are fully out of the closet about their sexuality.

There are occasions when revealing photographs come out that aren’t exactly NSFW. In these cases, you’ll see something close to naked but not nude.

And there is a reason for this, according to our source.

“Sometimes, you want to show audiences just enough to tease interest out of them. Let’s face it – sex sells. So the more skin you can show, the better off. That’s why you’ll sometimes see underwear shots that serve as eye candy.”

There are more examples of this kind of thing that we can list in this one post. But all one needs to do is look at Mr. Chris Evans photos in from the recent and not so recent past to see that audience teases work well!

While it doesn’t happen often, there are rare occasions when a male personality’s private imagery is released without authorization. Our industry source told us that it can be hard to truly know.

“When pics come out of someone’s d*ck, like a selfie, you’ll usually hear about their release being unauthorized. Ninety-nine percent of the time that’s complete BS!”

“Reps say this to drive the story and create sympathy. They’ll even go so far as to create a Twitter hashtag with the star’s name in a faux sign of support.

But when you go to ask the ‘victim’ what they know about the imagery, as in ‘are the pics real’ and ‘how did they get out’, they almost always respond with no comment.”

Several years ago, there was a case where it appeared a true unauthorized release of photos happened with MLB Baseball player Grady Sizemore. Apparently, someone busted into a computer and extracted his NSFW photographs. Once stolen, they were published online.

The MLB spent a considerable amount of time trying to get the images off the web. In large part, they succeeded. But some sites, like DeadSpin, still has them available for viewing. Just head on over to their site and do a search.

Finally, some imagery comes out that appear to be of a given male personality but simply aren’t. Here, we’re talking about fake pics that have been cropped, chopped and otherwise altered. Sometimes they are put out by fans. But other times, they’re part of an elaborate PR program.

Our source suggests the following:

“Have you ever noticed that a revealing picture of an actor hits the web like a storm and goes viral? Then, a few days later, you catch word the images were fake?” asks our source.

“That leak didn’t happen by accident. Usually, doctored pics are carefully placed on the Internet just before a major movie release. Always look at the timing!” he urges.

A possible example of this might be seen in the case of Kellan Lutz, who back in 2014 received a ton of press based off one specific photograph. Check out this BuzzFeed article to learn more.

Remember, Lutz had a new film – The Legend of Hercules – coming out around the time the doctored photo hit the web. Was this a coincidence? That’s up to you to decide.

Are NSFW “leaks” by male actors, reality contestants and wanna be’s a good idea? Our source thinks the answer is probably not.

“There is an immediate benefit to be gained because people are gossiping about you. But remember, they’re talking about your pics and not your skills. Movie and television talent are chosen based on abilities. Just having a big d*ck or tight a$$ will only get you so far.”

At the end of our discussion, he adds:

“Once the story runs its course, the person is left with the same problems they’ve always had.”

What do you think about celebrity NSFW “leaks”? Be sure to vote in the poll above.

Thanks for stopping by!