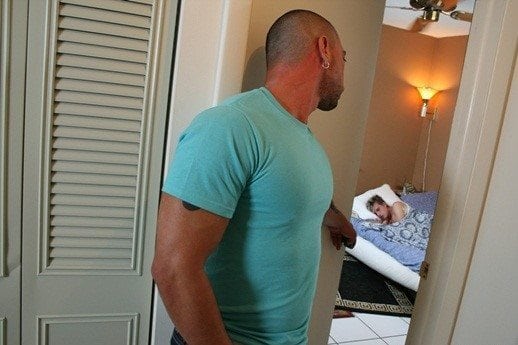 The worst part is that he doesn’t seem to remember any of it. Or does he?

By: Kaleo in Minneapolis

Like a lot of gay men, I developed a crush on a straight man. In my case, I started crushing on my roommate almost immediately after he moved into my two-bedroom condo.

No, I wasn’t head over heels in love with him or anything like that. But I fully admit that I was attracted to him on a number of levels.

His name was Blake and I met him on Craigslist around three years ago after he responded to my ad for a roomie.

I still have the advertisement:

30-year old gay professional male looking for a non-smoking roommate to share two-bedroom spacious condo unit near downtown. Looking for professional individual who is clean, quiet and earns a steady income. No pets. Free use of parking space. $750.00 mo.

Almost a dozen people replied within the first forty-eight hours. If you’ve ever gone through this experience, you know that most of the folks who contact you are total flakes.

“Is it cool to smoke pot?” and “Is it OK if my parents send the rent check” are just a sampling of some of the messages that people were sending me. I started to become discouraged.

That is until Blake contacted me. “The room you have sounds like the ideal situation for me. I’d love to see it!” read his email.

We met in the coffee shop next door to the condo. I’ve learned that it is best to screen people first, face to face, before allowing them into your home.

As we sipped on two house blends, I told him I worked at a bank and that the room for rent had become open after my previous roommate decided to move in with her fiancé.

Afterward, Blake told me he had recently moved to the area from Houston to take a position as a health sciences instructor at a nearby university. He was stable, could afford the rent and despised clutter. “Check, Check, Check!” I thought to myself.

During our chit-chat, he also told me he was straight but that my being gay wasn’t an issue because he had a gay younger brother back in Texas. “Check!”

If I had to describe Blake, I’d say he channeled the looks of country singer Sam Hunt. He was 31, masculine and stood about 6’2 with an athletic build. What can I say – the guy was hot.

But what won me over wasn’t his looks but instead his laugh, which had a disarming quality that somehow made his blue eyes bluer.

After we left the coffee shop and toured the condo, we talked a bit more and both agreed it felt like a good fit.

By the six-month point of living together, we had developed a close friendship. You know – the type of friendship you have with your roomie where you talk about everything and anything.

At night after work, he would tell me about his day and I would share some things about mine. And then there were the conversations about dating. He had been casually seeing a girl he met on Tinder and I was kind of dating a guy I met at a bar. “Is it normal to just want sex from her but not want to get serious?” he would sometimes ask during our banter.

I could understand why he didn’t want to move too soon too fast with someone. Before we became roomies, he was involved in a relationship with a woman for nearly two years.

And from what I gathered, there were once marriage plans in the work. But for whatever reason, things just didn’t work out.

I felt bad for him in some ways because I knew that Blake was the type of guy that most people would find a catch.

He was smart, charming, and funny. About the only negative I can think of was his obsession with the Dallas Cowboys – that and a competitive edge that could be somewhat annoying.

And yes, by this point in time I was crushing on him. It didn’t help that from time to time, he would parade around the condo in jeans and a t-shirt, revealing a hairy, muscular chest that just drove me nuts.

So one random Sunday night around 10 pm, we were both sitting on the couch watching some program on the ESPN about what it takes to become a successful agent in professional sports.

“Hey bud – I need to get some Z’s because I have an early day tomorrow but I’m not really tired. Be right back – I’m going to grab an Ambien. Do you want me to bring you one?” he asked.

Sleeping has always been a struggle for me ever since I can remember. It’s the nodding off part that seems to give me trouble. And so when Blake made the offer, I figured why not.

A good 30 minutes after we popped our sleeping pills, I can remember feeling a bit light headed, which eventually gave way to a sensation of being strangely relaxed. After that, things are a bit fuzzy.

The next morning, my iPhone dutifully chimed off 7am. As I laid in my bed, I realized I had my jeans on but no shirt. I had no memory how I had there or even setting the alarm.

I shrugged it off, got up and prepared myself for work. I recall being a little groggy but it wasn’t over the top. Kind of like a very light hangover after you tie a few on?

At some point later that afternoon, when I was sitting in my office and going through emails, I started to experience strange, foggy flashbacks.

In one memory, I was going down on Blake while he sat on the couch. And in another, we were making out. And yet another, he was blowing me.

There were blurs of his manhood but I couldn't make it all out. Beer can size? It freaked me out but at the same time, kind of turned me on.

“Am I going crazy? What the hell is this all about?” I wondered to myself. “Did this shit really happen?”

Try as I might, I couldn’t make sense of any of it. It was like having a dream. You can remember bits and pieces but you can’t recall a lot of the details.

“I’m going to grab an Ambien. Do you want me to bring you one?”

Throughout the rest of the day, I struggled to concentrate on my work. Desperate to understand what was happening, I called a friend who happens to be a social worker.

She asked me a few questions and then inquired about the night before. When I shared with her that I had taken a sleeping pill, she helped me to connect some of the dots.

Apparently, Ambien has been known to cause some people bizarre side effects, including sleep walking, memory loss, and even amnesia.

As I write this post, I wish that I could tell you that as time went on, the memories became clearer. Honestly, I do because there’s just something horribly frustrating about not being able to retrieve them.

One fuzzy memory that stuck out a bit was trying to clean up a stain. As I closed my eyes and focused on the fragmented imagery, I remember trying to blot up his semen from the armrest of the brown suede couch.

While I don’t remember him releasing, I do recall using a blue washcloth to soak it up.

After work, I raced home to inspect the couch. There was a part of me that still wondered if all of this had been a fantasy. Can you blame me?

Well, it took about 5 seconds to realize that something did happen. While difficult to see, the outline of the stain was still visible.

What’s more, when I looked in my hamper, I saw the washcloth, which was still wet to touch.

And in the kitchen, I could see a bottle of silicone lube in the trashcan – lube that I know had once been in the drawer of my nightstand.

Later that night, when Blake got back home, I played it cool. To be honest, I didn’t want to be the one who brought it up. To my surprise, he acted completely normal. He was either really good at hiding things or he didn’t remember any part of what happened.

“How was your day bud?” he asked. “Man, I had a killer one myself. Let me tell you about the new dean we got. He’s a complete jerk …”

It was like nothing had happened. I didn’t know if I should be relieved or insulted. But if I am honest with myself, I was probably a bit hurt. I wanted him to desperately remember something.

In a foolish attempt to stir his memory, I pointed out the unsightly stain on the couch. “Do you know how that got there?” I asked in a quizzical tone.

He said he had no idea. In fact, he thought it might have happened a week earlier when his girlfriend had come over and she spilled a drink.

I decided to drop it. After all, things were still extremely blurry to me. What was I going to do – tell him that we had blown each other in an Ambien hookup?

At the end of Blake’s one-year sublease, he decided to move out. Not because things got strange or awkward. Instead, he was moving in with his girlfriend as a tryout before taking the next step of becoming engaged.

We’re still friends today and while my crush has faded, it’s still kind of there. We talk to each other once a month or so and occasionally meet up for coffee.

And for the record, we never did Ambien together again after that one time. But I sometimes wonder if Blake didn't offer me that pill, knowing something might happen?

After doing some research, I found out there's a name for this type of situation called Ambien Sex. And no, I don't think he raped me. But both of our inhibitions certainly were down.

I know what happened was real. There’s no denying it. I just wish I could remember more. And it still bugs me that he apparently doesn’t recall a thing.

Editor's note: If you want to learn more about this topic, visit this article on Live Strong.

Do you have a real life story that you would like to share? Why not give us a shout?