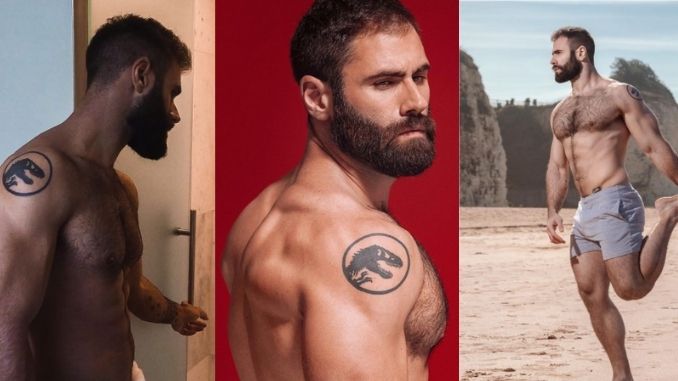 You may have seen model Francesc Gasco on Instagram, YouTube, and other social media platforms, but what do you really know about him? Is there anything more to the man than his muscular body and hairy chest?

A few days ago, I began wondering the same thing after someone posted his picture in a Facebook group I belong to called The Real Muscle Gods on Facebook. Feeling curious, I decided to do some research.

The truth is, looking at pictures of fitness models has always motivated me to get my workout on – plus, there’s just something about this bodybuilder that stands out. I don’t know if it’s tattoos or his beard, but I just find myself drawn to his pics and videos.

What follows are five quick facts on Francesc Gasco you might not know, plus some pictures that stand out along the way. Are you ready? Check it out.

So many of the models on Instagram have a claim to fame because of their looks. But in the case of Francesc Gasco, there’s something special that stands out.

Can you say Dr. Francesc Gasco? It’s true. He earned his doctorate in Paleontology from the Autonomous University of Madrid.

Are you into roleplay where you dress up and become a character from movies, television, or a fantasy? If the answer is yes, you’ve no doubt heard of cosplay.

Guess who else is into this form of fun? Yep, that’s right – Francesc! He played the part of Thor (Chris Hemsworth) in the past. In many ways, you can see the resemblance!

To the surprise of no one, Francesc is a bodybuilder. His Instagram account has tons of pictures of him lifting weights at the gym.

He’s particularly into CrossFit, a type of interval training that involves high-intensity movements, often involving some type of resistance with weights.

One of the things you’ll quickly notice about Francesc, aside from his body, is his beard. And it’s his beard that stands out in so many of his photos.

In some of his pics, you’ll see a dark brown beard and in others, it appears he may use some coloring. At any rate, the facial hair he sports is always meticulously trimmed and styled.

When examining his photographs, you’ll notice that he has a number of different tattoos that are located on different parts of his body.

The one that stands out is the dinosaur on his left shoulder, which no doubt speaks to his paleontology background. But that’s not the only tat.

He’s also got a Superman tat on his lower abdomen, which is very close to – well – you get the point. Be sure to look for it when you go through his snaps.

Francesc Gasco is one of those models that’s hard to miss. Hopefully, some of the information shared here will help you know something more about the man than just his beard and brawn.

Are you a fan of Francesc?

What we know about Florian Munteanu