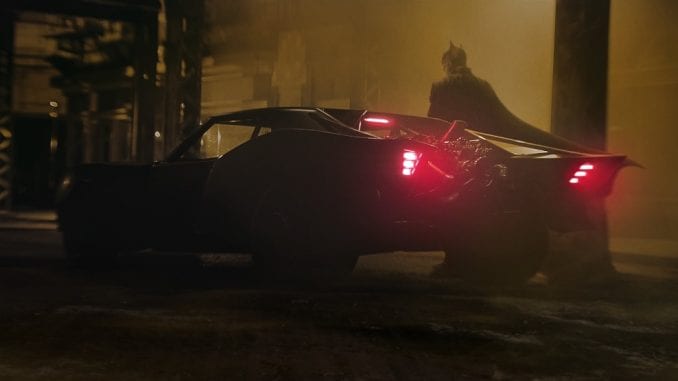 Robert Pattison Might Be Upstaged by the New Batmobile

Most of the previous cinematic batmobiles have been insane custom supercars with futuristic features that only Bruce Wayne could find or afford. Grappling hooks, missiles, retractable wheels – anything goes for a batmobile.

Except for the modified Ford Futura batmobile that Adam West drove on the 1960s TV show, this new batmobile actually looks like a real vehicle that someone could build and drive. The Batman director Matt Reeves just announced that his new movie has wrapped filming and I couldn’t be more excited to see the new batmobile in action.

The latest batmobile is wildly different from what we’ve seen before. Batman is known for his tech gadgets, but the new batmobile doesn’t seem to have as many engineering advancements as the sleek vehicle that Michael Keaton drove in 1989. You might not see any rockets, machine gun turrets or an entire motorcycle spring out of the interior panels this time around.

Well, not so fast.

That fits perfectly with Matt Reeves’ approach to The Batman. Even the Batman costume looks more realistic than previous versions. Robert Pattinson is sporting some homemade tech that fanboys and critics have likened to a cosplay outfit.

It’s not because this film lacked a Hollywood budget. This is supposed to be Bruce Wayne’s first costume and batmobile after the death of his parents. Robert Pattinson looks to be one of the darkest Dark Knights to ever put on the cape and cowl. From the looks of Pattinson’s Instagram account, he’s pretty taken with the new batmobile, as well.

Most of what we’ve seen about the new batmobile comes from the cinematic trailer. If you doubt that the batmobile will be the real star of the show, then see if you can get any clues about it from the Warner Bros. trailer.

Here’s What We Know About the New Batmobile.

The new batmobile sounds like it has a V8 engine with a supercharger. That would also fit with the Dodge Challenger model. There are literally flames coming out from under the hood. You can clearly see under the hood in the trailer. It looks like there is a controlled furnace under that thing. There are gill slits for air intake and a raised center panel. This isn’t some new age electric powertrain, it’s all muscle.

The Dodge Charger SRT Hellcat has a 6.2 Liter supercharged HEMI V8 engine. It produces 717 horsepower and 656 pound feet of torque. It has a similarly monstrous roar when rubber meets the road. That’s fast enough for a batmobile.

However, the rear of the new batmobile has a jet engine. What batmobile would be complete without a rocket afterburner? There’s no telling how fast this vehicle can go. There’s all that torque and horsepower provided from the supercharged engine in the front and there appears to be a separate turbo powertrain in the back.

The rear quarter of the new batmobile bears a striking resemblance to another real speed demon – the McLaren Speedtail. Both supercars have this undulating wave traveling over the rear wheel wells that comes to a sharp taper over the rear brake lights. It will be interesting to see if the batmobile can drive as fast as the McLaren, or maybe it’s even faster.

Related: Is The McLaren Speedtail Faster than a Fighter Jet?

The new batmobile has a wide stance like the Dodge Challenger SRT Hellcat Widebody Edition. There are 3.5 inches of added width from the fenders on that vehicle but the batmobile adds some beefy drag racing tires to the equation. It’s certainly going to rip up some pavement chasing bad guys across Gotham City.

You might recall that the batmobile from the Christopher Nolan Dark Knight films was also very chunky and heavy. So, it’s clear that Matt Reeves decided to lean in that direction and steer clear of the sleek and shiny batmobiles of the previous generations.

Critics of Batman’s new ride often site that it doesn’t look high tech enough for the caped crusader. Most of the naysayers aren’t considering that The Batman is set at the beginning of Bruce Wayne’s foray into the vigilante business. So, this is most likely the very first batmobile that Wayne has ever built.

The new batmobile certainly isn’t as flashy as the one seen in the 1997 film Batman and Robin. Ironically, The Batman is set in the 1990s and that’s one of the reasons why the batmobile looks more like Knight Rider and less like a decommissioned military vehicle from Area 51.

The batmobile doesn’t look all that mysterious either. It doesn’t look like it dropped in from a portal to Hell. There aren’t any obvious Batman symbols or markings. However, if you notice the rear of the vehicle in the trailer, there is an outline of the Batman symbol in the chassis bars and frame of the car.

This batmobile is true to the comic books, as well. There’s a cover from “Batman: The New Adventures” issue #408 that shows a vehicle that looks a lot like the new street legal batmobile. It’s important to note that older versions of the batmobile weren’t very high tech either.

It’s purely up to artistic interpretation at this point. Batman’s vehicles can have all different kinds of aesthetics as long as they fit with the theme of that particular outing. So far, I believe that everyone involved in the Batman movies has gotten it right.

The Batman will provide a new and different cinematic approach to the caped crusader. There will most likely be details that polarize the fanbase, but Batman has been made over so many times before, that audiences shouldn’t balk at Robert Pattinson’s costume, his performance or the low tech but totally badass batmobile.

Be sure to check out The Batman with Robert Pattinson on June 25th, 2021.