I was gay sex slave and repeatedly raped by brutal gang

By: Ron in Homewood, Illinois

I went to prison in 2010 for several drug charges connected with crystal meth. This would be the first time I would be behind bars in my entire life. I was 30-years old and completely naive of anything having to do with prison.

I also happen to be bisexual.

When I first arrived at the Statesville Correctional Facility in Joliet, I was afraid someone would murder me. Several people I knew had spent time there and the word on the street was Statesville was dangerous.

My first week wasn't as bad as I thought. But after that, things went downhill fast. At the beginning of my second week, three members of the Latin Kings (LKs) forced me to have sex with them.

I tried to tell the them no but quickly found out that when the LK’s want something, they get it. One of them used a piece of rebar and struck me on the side of my head, knocking me out cold. When I came to, I woke up in a shower stall with white stuff on my face and butt. I was also bleeding badly.

Reporting Gay Rape in Prison is a Joke

I had thought about reporting the rape to the corrections officers (COs) who found me but decided against it. That’s because one of the first things you learn behind bars is that snitches don’t live very long.

And here is the thing. After you get raped by a gang in prison, they basically own you. That's because you become their property – slave to be used for sex.

I learned this the hard way because a fews days after being gangbanged and group raped, the same three LK’s did it again to me. When I went to scream for help, one of them put a shank to my throat and told me flat out that he would slice me. I knew there wasn’t jack I could do or I would be stabbed to death.

They rustled me into a porters closet and told me to strip down. There was nothing I could do as two of them forced me on my knees while the third kept watch.

Without lube or condoms, the bigger of the three rammed his d*ick up my butt. I couldn't help but scream because I was in excruciating pain. That’s when one of them punched me in the face then shoved his d*ck in my mouth.

It didn’t end until all three of them finished what they had set out to do.

The Realities of Being a Sex Slave In Prison

At Statesville, the majority of inmates are African American. A smaller but significant percentage are Latino. And mixed in the middle are white guys.

I’m telling you this because if the Gangster Disciples [the black gang] doesn't get you, the Latin Kings will. Once that happens, you become their property.

The only benefit of being “owned” is that rival gangs won’t touch you. But the tradeoff sucks because you are basically at the mercy of your owners.

Not only do they rape you, they also make you their slave. And if you try to show the slightest bit of disrespect, the punishment is severe.

For nearly two months, various members of the LKs repeatedly took turns gangbanging me … over and over again. Do you know what it's like being constantly raped or living in fear of it?

While I can’t be 100% sure, I’d bet my life on it that the correctional officers knew exactly what was going on. You see in prison, a lot of the guards are corrupt and can be easily bribed. It’s a joke. And I’m not even going to tell you about the inappropriate relationships that the CO’s have with inmates.

So let me continue.

Tired of Being Raped

I had thought about killing myself. Seriously, I did. But I didn’t do it because I did not want to hurt my family. One sympathetic guy I knew [a black guy owned by the Disciples] who was also being violently raped suggested that I get myself sent to solitary confinement.

And so that’s what I did.

I told a guard to his face that I was going to kick his ass. Threatening any CO is a serious offense. As a result, I was placed in “administrative detention” for six months.

Here, you get thrown into a 12-foot cell with a concrete bed and dim light. And that’s where you sit for 23 hours a day. No television, no books – nothing.

But it was a lot better than being forcibly raped by other men. 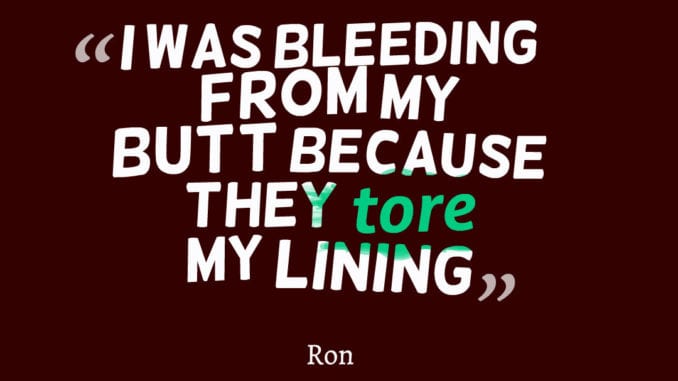 A lot of LGBT prisoners are placed in solitary because when you are gay in prison, you’re a target for harassment. And it’s not just the other inmates that go after you – the COs do too.

It was only because of my lawyer that I did not end up getting sent back to the general population. After cooperating with prosecutors to help them make cases for some dealers they were trying to convict, I was eventually transferred to Statesville Minimum Security Prison.

I spent several years there and was finally released in 2015.

It’s going to take me years to get through all that happened. I still have flashbacks of being prison raped and gangbanged by the LK’s. Right now I’m working with a drug and alcohol counselor to help me stay clean (I’m going on to my seventh year of sobriety). He's diagnosed me with PTSD, which isn't all that surprising.

If you doubt this kind of thing happens, here is a video featuring several male prison inmates talking about raping other men. This will give you an idea of the realities of having violence visited on you in jail.

Several years ago, there was an article that came out from the Journal of Urban Health that explored rape in prison.  It happens a lot more than you think.

I hope if you are reading this that you will remember people in jails. Most are non-violent offenders – people like me who happened to make some really bad decisions.

Being an inmate is already hard, trust me. When you are abused, gangbanged and made into a sex slave, it makes trying to do your time all the worse.

If you want to know more about what it's like REALLY being in jail, read the book, Life Behind Bars (See Amazon).  I hope you never have to go to prison – ever.

If you have a real life story you would like to share, make your pitch to the blog.