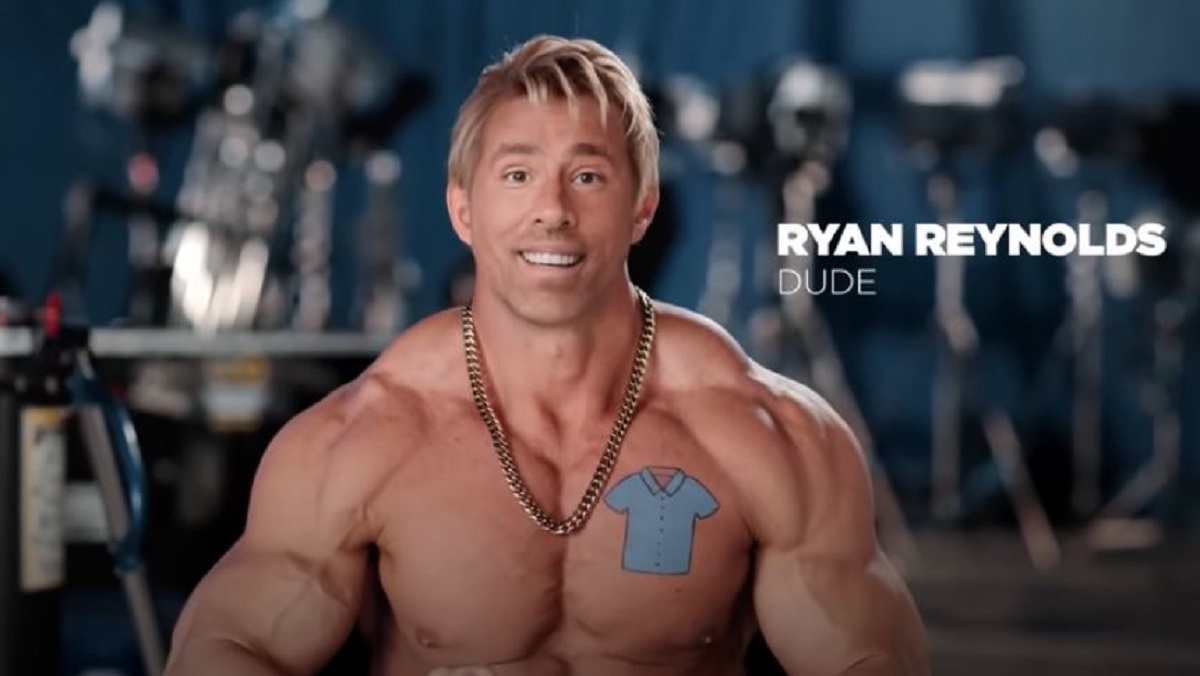 Get to know Ryan Reynold’s muscular alter ego. And learn a little about how the actor actually exercises for his films.

In the upcoming movie Free Guy, Ryan Reynolds finds himself in a world that’s somewhere between Ready Player One and The Purple Rose of Cairo. Guy, played by Reynolds, is a character in a video game. But, he’s unaware of this fact. He goes through the motions of his life before one day deciding to change a coffee order. He then starts down a bold road to “freedom,” which is encouraged by a gamer that knows the “real deal.” A bunch of chaotic, hard-R video game antics then continue.

Related: How To Maintain Muscle Mass As You Age

A Hulked Up Ryan Reynolds

To promote his new movie, actor and businessman Ryan Reynolds released a new special video on YouTube this week. We know that movie stars put in a lot of work in order to get buff for their roles. They put in a lot of hours in the gym and have personal trainers that get them into the best of shape. They even have to stick to a VERY strict diet. And most of that costs lots of money. And many fans thank them for it when we get shirtless shots in movie theaters and streaming screens.

Playing into that, Reynolds decided to show his muscle-bound persona for the new film. Of course, it’s not Ryan Reynolds’ real body. It’s a body double with Reynolds’ head added in with editing. But we now have an idea of what Reynolds would look like if he became a massive bodybuilder. And, we are thankful for that knowledge.

Playing Dude, the nemesis of the film’s main character, a shirtless, muscular Reynolds says, “I do know you hear actors complaining about how hard their movie workouts are.”

Reynolds then reveals his massive physique as the character Dude gets out of bed, grabs a gold chain, and comes into the frame. “I don't have time for that. I've been at this one week and I've got to tell you… it's coming in nicely.”

The actor then mocks the real-life work it takes to get such as massive body. Clearly, he’s playing up the fact that the body isn’t really his.

“I start every day with a protein bomb made exclusively of human muscle,” he jokes. “It's completely organic and illegal.”

The video is a self-aware, meta-joke that plays on the reality of exercising and working out. And it’s just a fun way to promote Reynolds’ new movie.

“I actually fathered our youngest daughter when I was this muscular,” Reynolds adds as a final joke. “The child was born full grown and wearing shoes, which was weird for Blake.”

But in full truth, Ryan Reynolds has had a tough time staying fit for Hollywood. Back in 2018, the actor had to bulk up to replay the merc with a mouth, aka Deadpool. Reynolds underwent intense training to star in Deadpool 2. And, again, he worked with a professional trainer to do it. Specifically, Reynolds exercised under the guidance of Don Saldino. Saldino is a trainer who has worked with several actors like Sebastian Stan, whose exercise routine we’ve written about before, David Harbour, Lieve Schrieber, and even Blake Lively, Reynolds’ wife.

When it comes to Ryan Reynolds, however, Don Saladino says that keeping the comedic actor fit has been about keeping his routine dynamic.

“Our training has evolved so much in the last 10 years,” Saladino told Menshealth.com in 2018. “It’s been a lot fun to see how Ryan gets in better shape as he gets older.”

“We've eliminated a lot of abdominal training,” Saladino added. “In the beginning, he would start every workout with a lot of abs, but he's come to realize that a lot of his abdominal work comes down to the heavy lifting, pulling and squatting he ends up doing. All those exercises are really focusing on that abdominal wall.”

Related: 6 Business Tips You Could Learn From Ryan Reynolds

So this is yet more proof that everybody’s bodies are different. What may work for someone may not work for someone else. It’s really about trial and error, with guidance based on what has worked for others in the past. So don’t get discouraged if your workout isn’t creating the results you want. Plus, you also have to consider how other factors of your life may affect your body and your workout routine.

“The exercises are always changing,” said Saladino. “There's different stresses on his body—he might be traveling a little bit more one week, flying on a plane, sitting and doing some writing.”

With that, you have to understand that some days are easier or harder than others. And you have to approach each day by day. Challenge yourself but also don’t break yourself with unhealthy expectations and goals.

“Not every day has to be a Level 10 on the workout meter,” Saladino continued. “He comes in, he and I sit down and we have an understanding. I ask ‘how are you feeling today,' and we make an adjustment to focus the intensity on how he’s feeling.”

But what Reynolds’ experiences show us is that you can be committed to doing the best that you can do at the moment. That may not be as much as you could do yesterday, but that’s ok. What’s important is integrity and the desire to do your best and give it your all.

“Most people don't know [Reynolds is] really performing a lot of his own stunts in Deadpool,” Saladino said. “He wants things to look as real as possible on camera. For him to be able to do that, I need to make sure his body is moving as well as it looks.”

Oh, we’ve seen that Don Saladino. So thank you Ryan Reynolds for giving us a good laugh, a good eye-catching character to watch, and a good dose of reality. Exercising and building muscle is hard. And let's not focus too hard on the fantasy of it all. It's a nice good laugh. But it's a tough journey that many of us couldn't handle (or afford).