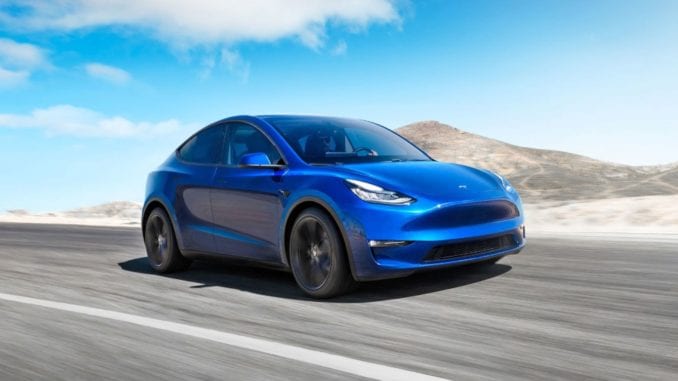 Introduction to the Model Y

That might become a bit of a catchphrase in the near future because the Model Y is remarkably ordinary, considering the motor company that’s producing it.

The Model Y is the fourth electric vehicle from Tesla. Surprisingly, it’s aim isn’t to break the all-electric mold, but simply to make all-electric driving more affordable and sophisticated.

The Model Y is a four-door crossover vehicle with an all-electric powertrain. There are four model trims to choose from: Performance, Low Range RWD, Long Range AWD, and Standard.

The Model Y will begin making appearances on showroom floors as soon as Fall of 2020. The Standard range model has an MSRP of just $39,000 and the Performance model tops out at $60,000.

The Model Y with long range battery and rear-wheel drive has an EPA estimated driving range of 300 miles, putting it atop the sport utility category.

The low-end Standard model still gets 230 miles on a single charge though. You can fully charge the all-electric system with an overnight session in your home garage using regular electric outlets.

You can also top-up the charge at a supercharger station. There are 12,000 charging stations around the country and that network is steadily growing every month.

A 15-minute break at a charging station will rollback 168 miles on your all-electric powertrain. There’s an app that the Model Y has loaded into the onboard computer that can help you locate one of them.

All-wheel drive or rear wheel drive come standard on all vehicles. The all-wheel drive options boost torque on demand and overall vehicle responsiveness. That makes sense because the Model Y has two independent motors that power the front and rear axles.

This gives the Model Y superior handling in a variety of environmental conditions. Tesla execs would like you to believe that the all-wheel drive Model Y can hold its own when taken off-road, but with the vehicle’s low center of gravity, you’d better not even attempt it.

This isn’t an off-road vehicle, no matter what the execs at Tesla say.

You would expect a Tesla to be super-fast though. They’ve built a legacy around speed and the Model Y does not disappoint. The Performance model can travel from zero to 60 MPH in 3.5 seconds.

It also has a top speed of 150 MPH. The acceleration will put your back into the chair, but the platform could benefit from having larger disk brakes for added braking power.

Minimalist Style of the Model Y

One of the first style cues that catch the eye is the front grille of the Model Y. There’s nothing there. It’s an all-electric vehicle and that means it doesn’t need a traditional front grille to allow air into the engine assembly.

It’s undoubtable that all the big automakers will take advantage of this fact to create never-before-seen fascia on their upcoming vehicles, as well.

The Model Y seems to lack vision with its choice of a plain, unadorned stretch of paneling up front. It could either be a subtle way to ease consumers into the idea of an all-electric powertrain, or simply evince a lack of creativity.

However, nobody has ever accused Tesla designers of this before. Just look at the falcon doors on their Model X SUV or the deep cuts in the profile of the Tesla Roadster.

They’re not afraid of abstract design, but that’s not the point of the Model Y. Subtlety seems to reign out in this case, especially when you consider the Model Y’s matching austere interior.

All-around, the Model Y, is a dumbed-down version of the Model 3 and has the same goal as the Volkswagen Beetle – to be every man’s car.

The Model Y has a pronounced rounded rooftop that also recalls images of a VW Beetle. That’s disturbing because Tesla is a trail-blazing motor company. They shouldn’t be borrowing ideas from anybody at this point. Tesla designers might have thought that a high roofline meant that the Model Y was automatically a crossover, but that type of design logic seems shortsighted and inconsequential. It’s hardly an accident though.

The rounded roof and low center of gravity provide additional safety and handling to the Model Y.

There’s not much to look at inside the Model Y. There aren’t any flashy buttons or switches. You won’t find a rotary wheel to toggle through your endless vehicle settings or even a shift knob to comfort your right hand.

There’s just a large 15-inch touchscreen display in the center and the driver side steering wheel. Passengers will undoubtably feel shortchanged on diversions.

Tesla boasts that the Model Y has room for up to 7 passengers with an optional third row of seating. Yet, you’d have to be a troop of circus clowns to fit 7 full-sized adults in there. The Model Y isn’t an Audi Q7, but it does comfortably fit 4 people.

The interior design favors the driver. The front seats sit high in the cabin and the rounded ceiling gives more than adequate head room. The dashboard is set down low so that you feel like you have a commanding view of the road ahead.

The Tesla Model Y has 66 cubic feet of cargo space. The rear bench folds down flat and the back liftgate opens wide enough so that you can transform the interior of the Model Y into a 2-seater wagon with enough room for large and bulky items if need be.

Perhaps that’s where the terms “crossover” and “SUV” apply to the Model Y. Otherwise, it’s basically a 4-seater sedan with a sportback hatch.

The Tesla Model Y comes standard with collision warning, automatic emergency braking and blind spot monitors. Some automakers bundle those features into costly packages, but Tesla throws them in the bag right up front.

Additionally, Tesla engineers had to figure out what to do with that massive cavity in the front portion of the vehicle since the internal combustion engine was taken out. The answer is an impact-absorbing mass of high-strength steel which shields front row occupants from forward collisions.

Tesla has made headlines with self-driving vehicles. Not all the attention has been positive. There have been some accidents when the Tesla auto-pilot feature has been enabled. However, a quarterly Tesla safety report confirmed that it’s accident rate was 1/7 of the national average.

Statistics can be misleading in this case because in March of 2018, the second auto-pilot fatality occurred in Mountain View, California.

Despite a dubious reception to autonomous driving, the Tesla Model Y can drive itself in certain conditions. It has a 360-degree array of onboard cameras and sensors. There are cameras on all sides and 12 ultrasonic sensors.

The forward-facing radar can detect objects more than 500 feet away. One interesting function of the auto-pilot is that the vehicle can actually locate you in a parking lot.

So, you no longer have to comb through crowded aisles at the shopping mall, pressing your alarm key over and over again to find your vehicle.

How Does Tesla’s New All-Electric Model Y Stack Up Against the Competition?

The all-electric SUV from Jaguar looks the part. It’s definitely a premium luxury crossover with way more creature comforts than the Tesla Model Y. Both the I-PACE and the Model Y have a two-motor setup and provide all-wheel drive capabilities.

The Performance model from Tesla is a bit faster than the Jag. The Longrange Model Y also can go farther on a single charge.

The Jaguar I-PACE differs from the Model Y in value though. The I-PACE starts at an MSRP of around $70,000 and markets itself as a luxury vehicle.

The Tesla Model Y can cost just as much when you equip it will all the options, but the Standard model is slated to be just $39,000.

The Model Y has a different target demographic – middle class, eco-conscious drivers who have been waiting on an electric vehicle that they can afford.

If the price point of the Tesla Model Y is a big selling factor for you, then you should also take a closer look at the all-electric version of the Hyundai Kona.

It has the exterior style only a soccer mom would love, and there’s nothing about the design that screams – ALL ELECTRIC.

The long-range trim for the Hyundai Kona is priced at around $45,000 and the base model comes in below the Standard Model Y. It’s just $35,000. The Kona isn’t packing much power though. That’s the tradeoff.

It has a single motor system that only achieves 201 horsepower and 291 lb. ft. of torque. The Tesla Model Y can blow the doors off this thing, but the Kona has impressive driving range. Lower power means that it can stretch its electrons to a 250-mile driving range.

The new eTron from Audi looks more like a traditional SUV. It even has a similar front grille to the Audi Q7 even though it doesn’t have an internal combustion engine. Like the Jaguar I-PACE, the eTron from Audi isn’t cheap.

To counter the Model Y’s speed, the Audi eTron has a “boost” mode that can supply additional power to its all-wheel drive system. The Model Y has a higher top speed than the eTron and a farther driving range, as well.

Related: How fast is the New Lamborghini Huracán EVOe?

Audi is a leader in autonomous driving, so it can be expected that the eTron electric SUV will have some self-driving features that rival the Model Y.

The interior of the eTron will provide more luxury, and really aims to slide into a comfortable niche within Audi’s existing stable of vehicles.

The Model Y is an everyday car that makes all-electric more affordable. That’s not exactly a new accomplishment though. The Nissan LEAF has a starting price of $29,900 and has been around for years. So, Tesla isn’t reinventing the wheel here.

The Model Y does upgrade Tesla’s stable though with a vehicle that the average Joe can actually have a shot at buying. It’s got speed, but no style. It’s got range, but no identity.

The interior looks almost half-done. That’s the thing with new vehicle concepts though. The trend is leaning toward minimalism even though less driver input would mean that you have more time to entertain yourself while riding.

There should be more screens, more bells and whistles, not just a single touchscreen display for all your buddies to fight over.

The plus side to all of this is that there is competition. Automakers are making more electric vehicles and there are more choices for consumers.