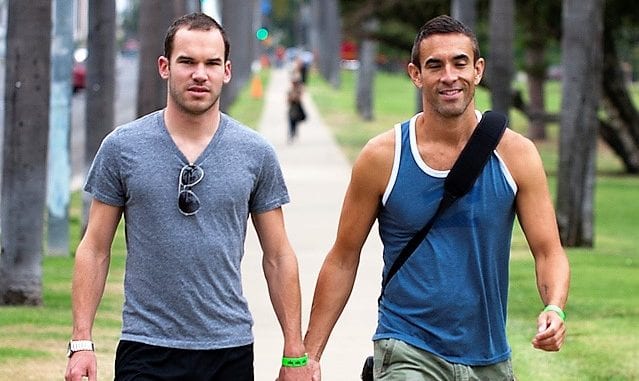 Ever meet that gay guy who had a timeline for everything in his life – you know – like when he’ll get married, how many kids he’ll have and even their gender – with names to boot?

Well, that was me when I first started out in the gay dating scene … until I got dumped by a guy like yesterday’s trash.

The crash to earth was hard and painful. In the final analysis, I figured out that the only real happiness comes from within and that I am the only person who can make me happy – not some dude.

And so after spending a good chunk of time licking my wounds and allowing myself to heal, I put myself back out on the market. There would be several other relationships along the way and more than a few painful tears. Over the course of time and with experience, I became stronger – and wiser.

Here are 12 gay dating lessons I wish I would have learned about long ago. Now that I’m in my mid-40’s and married, I figured I would pass them on to you now so that you might be able to benefit from my dating mistakes.

1. Expectations make it impossible to enjoy someone

If we have rigid expectations, we aren’t truly living in the moment. This means we can’t appreciate and enjoy the person for who they are instead of who we want them to be.

For example, if you are on a date with a guy and wondering how much money he makes and if he would make for a good husband, you make it super hard to experience what he has to offer in the moment.

2. Fun should be part of the experience

This point may seem overly simplistic but it really is true – dating is supposed to be fun. When we struggle with body image issues, play the game of comparisons or look for the negative in ourselves or other people, we choke off any opportunity of spontaneous laughter and joy.

Dating is a process that evolves over the course of time. Bonding happens through experiences, which are most powerful when fun is involved.

3. Don’t change who you are for him

There are going to be guys who for whatever reason simply aren’t into you. I found this out more than once. In my case, I thought that if I tried to transform myself into something “he” liked, I would magically become more desirable.

This approach always failed and ended up leaving me feeling confused about my identity and yucky inside. Stay true to who you are. Generally speaking, people like other people who are authentic.

4. Be aware of how much you like him and not just if he likes you

This is a big lesson that I truly wish I would have figured out in my early 20’s. It’s so easy to get caught up in the game of trying to win a guy over – you know – to get him to like you.

When we focus too much on this, we can lose ourselves in the process and end up having a pyric victory. This happens when we don’t ask ourselves the question: Do I like him – really?

5. Don’t get hooked on the look

I fell for so many guys based on their physical appearance. For me, the more masculine and muscular the better. If the guy was packing major goods, even better. That may sound shallow but it was my truth. The end result was liking a guy for who he looked like instead of who he was.

And while he may have looked great physically, that wasn’t always the case personality wise (a lot of them were narcissistic jerks!)

6. Having boundaries is OK

Did the guy flake out on that first date? Does he want to meet at a bar? Is he into partying? If those things are not cool with you, it is OK with not taking things further. There is a reason you have an intuition.

If you have a set of personal guidelines, don’t compromise them just because some cute guy is showing a bit of interest. And here is a secret – having boundaries can be sexy and by extension, a sense of self-confidence.

Dating really is a process that has a lot to do with numbers. In other words, the more dates you go on, the more opportunities you expose yourself to. Rather than going into it with the mindset of “I have to find someone”, change that narrative to: “I will likely date a lot of guys until there’s a good match.”

This way, you don’t put all that pressure on yourself to make each date successful.

8. You don’t have to put out on the first date

As part of my own dating experiences, I went through a period where I got confused with dating and hookups. Sad to say but I probably ruined a lot of good opportunities by thinking I had to make sexual contact with a person in order for them to like me.

At some point, I realized there really is a difference between a first date and a random hookup. The point here is simply to say hold off on anything physically intimate until a few dates have happened. There’s something nice about the buildup, you know?

There are going to be guys who simply drop off the face of the earth – even after you have dated them a few times. It’s called ghosting.

When this happens to you (and it will) you can’t take it personally. There are a lot of flakes out there that for whatever reason get their jollies off toying with the emotions of others. Don’t fall for their mind games. Simply move on to the next person and don’t look back.

10. Drinking doesn’t mean you have to get drunk

One of the biggies I wish I would have figured out was that drinking doesn’t need to turn into getting drunk every single time alcohol is around. It’s OK to have just one or two drinks or – to keep it real – not have any drinks at all.

Nobody should think less of you if you decide to just have one glass of wine or one beer. If someone does judge you, do you really want to be associated with them?

11. Look beyond the bars and aps

Bars are sometimes a fun place to hang with friends and potentially meet someone. On a related note, aps can sometimes be cool too – unless you meet a freak. But if you talk to a lot of guys who are in longer term relationships, you soon find out that they met “the one” through friends and associates.

The point here is to not confine yourself to nightclubs or dating aps when it comes to meeting people for potential dates. You might be surprised at the places where the guy you have been waiting to meet might pop up.

In an age where marriage has become a reality for us gays, it opens up lots of possibilities. It can also cause pressure to feel like you have to find someone fast. And I hate to say this but that pressure only intensifies the older you get.

But remember, marriage is a commitment that is multi-factorial in nature with a major emphasis on legal and financial issues. This is why it is important to take things slowly with a guy who you think may be that special someone.

A major component of gay dating is having the confidence and faith in yourself that eventually, you will meet someone. What’s important to keep in mind is that nobody will ever be a perfect match. And while it’s nice to think that a prince charming will magically come galloping into your life, it usually doesn’t happen that way.

If you are looking for other gay dating tips, a really good book you might want to pick up from Amazon is called: Gay Dating 101: Finding Men, Sex and Love in a Complicated World. What’s nice about this read is the straight forward, gay sensitive approach the author takes with the entire issue of gay dating and romance.