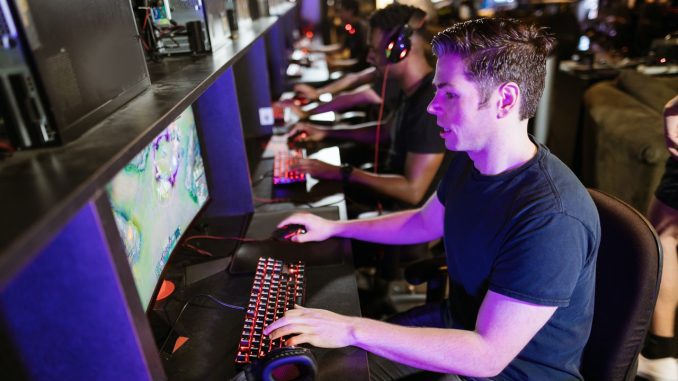 Are you gaming all by yourself? Well, you might be missing out on all the opportunities to meet new people and strengthen existing bonds with friends. Online games have huge communities of players. So, start camping out and get to know someone.

Gaming gets a bad reputation these days, especially from non-gamers. The image of a skinny, pale incel sitting in a dark room that’s illuminated only by the glowing screen of his computer game is so played out and downright wrong. Gaming is an immersive, interactive experience that has been scientifically proven to strengthen social bonds.

Yes, it’s true. Guys who game together build real social connections that last a long time. You can game in the same room with your buddies or play with friends who live on the other side of the planet. Most multiplayer games have a chat feature and the banter that goes down in the chats is entertaining in of itself.

Here’s my own personal experience.

How a Silly Mobile Game Brought My Friends Together

A few years ago, I left my hometown and moved from Miami to London. I left friends behind who I’ve known for decades. We used to play video games together all the time. We were super competitive and always had a blast. Then, I got married and moved away.

It was a tough time adapting to a new way of life without their support. We talked online through social media a few times, but the connection gradually faded away. I stopped gaming, too. I thought that grown-ups with responsibilities weren’t supposed to be gamers anymore.

When I came back to visit, I noticed that all my friends were playing Clash of Clans. I was surprised because we were always Halo, Call of Duty, first-person shooter type of guys and Clash of Clans was a silly mobile game with villages and cartoon characters, but all my guys were tapped in and seemed to be having a blast.

At first, I thought that I grew up and they were still being dummies, playing a stupid game on their smartphones. I couldn’t seem to re-establish any connection with them. There were times when we’d be in the same room together and they were all talking to each other through the game chat.

I felt left out, and I didn’t understand why they were playing this new game. After a while, I gave in and joined their clan. I was one of the guys again. I was playing Clash of Clans and the gameplay was refreshingly simple. It was kind of pointless, but soon I realized that the real action wasn’t the game itself but all the banter going on in the chats. This was the new way that all my friends were staying connected.

Are you coming over or what?

Later, nerd. I got stuff to do at home with my wife. You wouldn’t know nuthin’ about that.

LOL. Is she still hanging out with that hot chick….what’s her name?…

Did I say hot chick?  I meant thot-faced scallywag.

We never talked on the phone or texted. We just talked smack to each other on the Clash of Clans game. And I understood why. It was just the right amount of distance so that our bro language could be properly interpreted. We talked about all sorts of personal stuff that we just wouldn’t bring up face-to-face.

When I went back to London, I kept in touch with them through the Clash of Clans server chats. We hardly talked about the game. We talked about our kids, our car repair projects, and anything else that came up. I realized then that gaming was an awesome way to maintain a strong social bond with the guys who I didn’t get to see anymore in real life.

Every week there were regular raids in the game and my best friend would send messages to everyone in our clan to join in. Nobody took the raids seriously. You just needed to show up…like a true friendship. We could also exchange assets in the game and send each other gold and warriors like giving each other gifts.

Was Clash of Clans keeping my high school friendships alive?

Yes, it certainly was.

We all moved on to other games after a few years, but we all still game together to this very day. Gaming became the glue that gives five grown men a reason to check in on each other from time to time. It doesn’t matter what we play as long as we can call each other rude and offensive names in the chats.

What the Science Says about Gaming and Social Connections

Beyond my own anecdotal experience, there’s actual research into the connection between gaming and friendship. At the core, games are a way to transmit cultural and social information. Games can be either competitive, cooperative, imaginative or a mix of all three. Even before video games, people played games to establish a type of order in their society.

A study conducted by the Max Planck Institute for Evolutionary Anthropology in November 2021 looked at cultures all over the world to determine how they played games throughout history. The study concluded that cultures who experienced conflicts with outside groups played more competitive games with each other. On the other hand, cultures that experienced more conflicts within their own community tended to play more cooperative games.

The researchers found that the complexity of social interaction in online multiplayer games was just as strong as face-to-face communication. There is a clear framework of values and goals. Players also have the potential to form long-term bonds that transcend the gaming platforms that they were formed in.

There’s nothing wrong with being a solo gamer. In fact, I find it relaxing to immerse myself in a solo campaign after a long day of work. Yet, there are several ways to experience video games with friends. This should be seen as a completely different type of gaming experience, one that focuses more on social bonds and less on the pursuit of winning the game.

Start with the types of games that you like to play. There are puzzle games, world building games like Minecraft and Sim City, fighting games, adventure games, racing games, and open world games like GTA 5.

Next, explore the online multiplayer functionality of that game. You can go into the settings to look at the different game modes or look for help on YouTube. Reach out to your friends on social media and ask if anybody is playing that particular game. If you find a few likeminded gamers, you can set up an independent server so that you can all game together.

If you’re looking for new friends, then dive right into the chat features of your favorite online multiplayer game. Just like in the real world, building friends through gaming takes some time. Try to be consistent with your comments and helpful to other community members. You can provide tips and tricks. You can also ask if they do streaming on YouTube or Twitch. Keep showing up and online gamers will recognize you more.

You can also host special multiplayer events and competitions. On Minecraft, you can build your own world and share that creation with the greater Minecraft community. Online gamers are really supportive of difficult, time-consuming effort. You’ll be rewarded with a crop of potential new friends that will love to game with you.

Related: 15 Bro Date Ideas for You and Your New Friend

The best advice that I can give is to treat online gaming just like the real world. When you build friendships in the real world, it takes time and effort. The same is true with gaming. Don’t try to get too personal, too quick though. It’s a grind. Just focus your initial exchanges on witty banter and your shared interest in the game that you’re playing.

Another important thing to know is that the gaming community is broader than just your favorite game. You can interact with a much larger gaming community through Discord and Twitch. These social media platforms are specifically for gamers. There are thousands of people who share your interests logging on every single day.

So, you should never feel isolated if you’re a gamer. Reach out to the greater community if you feel lonely. You can livestream your games, comment on other people’s games, and invite old friends to try new experiences with you.

Have fun out there. Be patient and don’t rage quit if some toxic tool starts trolling you in the comments. Just fire back and keep moving. It’s probably that annoying guy from middle school who used to beg for your chicken nuggets. Give him another chance.

Read Next: Gaming and Energy Drinks – Is There a Bad Connection?